The CDIA, which listed Starbucks as a sponsor on its website alongside such vendors as Glock handguns and Point Blank Body Armor, is a group that is seeking to overturn Colorado’s constitutional amendment allowing cannabis for medical use.

Oddly, Tvert says, the CDIA’s website was curiously taken down an hour before his noon appearance at the 300 East 6th Avenue Starbucks branch. But SAFER outreach director Eva Enns called it “totally metal.” According to her, the site featured skull-and-crossbones graphics and a grim reaper rappelling from a helicopter declaring “Death on Drugs.”

On one hand, marijuana dispensaries keep some of the drug trade out of the hands of organized traffickers, ultimately reducing crime (something you might think law enforcement would support). On the other, that reduction in crime takes jobs away from those enforcement agencies. “Law enforcement groups are not motivated by maintaining public safety or developing a workable system of medical marijuana regulation,” Tvert adds. “They are motivated by one thing — job security.”

Tvert hopes to spread awareness among consumers that don’t realize Starbucks helps fund the CDIA’s efforts. He believes that by pressuring Starbucks (and other national corporations such as Enterprise Rent-a-Car, Sheraton Hotels and Resorts and Embassy Suites) through consumer backlash, he can help impede the CDIA’s efforts to abolish dispensaries and wage war on marijuana. 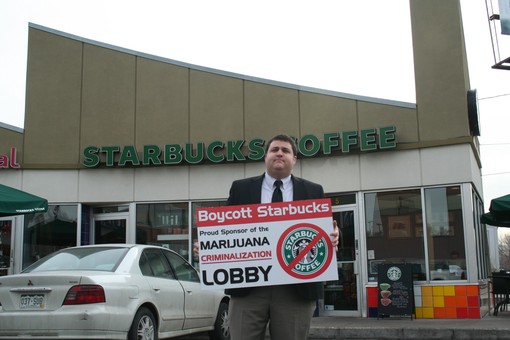 http://patients4medicalmarijuana.wordpress...
Add Your Comments
LATEST COMMENTS ABOUT THIS ARTICLE
Listed below are the latest comments about this post.
These comments are submitted anonymously by website visitors.