Add an Event
Newswire
Calendar
Features
Home
Donate
From the Open-Publishing Calendar
From the Open-Publishing Newswire
Indybay Feature
Publish to Newswire
Add an Event
Related Categories: International | Environment & Forest Defense
Australia: Kate Jones spins Climate Destruction of Great Barrier Reef
by Takver - Australia Indymedia
Sunday Dec 27th, 2009 9:25 PM
Kate Jones, the Climate Change Minister for the Australian State of Queensland, recently stated "Queenslanders are by per capita the highest emitters of carbon in the world." and said the Queensland Government was "committed to world action on climate change." Spoken at the Copenhagen climate talks on December 15, they illuminate the greenwashing, spin and hypocrisy that our politicians are engaging in, especially in this case in regards to saving the iconic Great Barrier Reef. 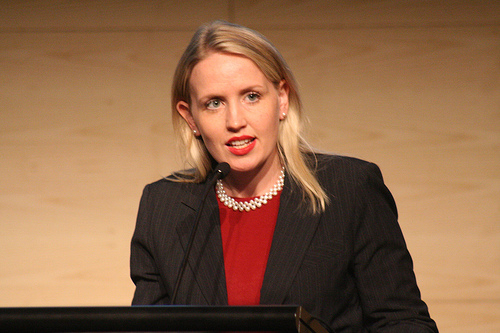 "We as a State are already taking action. We are home to the world's largest reef, the Great Barrier Reef, and that is why we are committing here today to reduce runoff into the reef by 50% in four years." she stated to the crowd of climate bureaucrats and fellow politicians.

Bradley Smith from Friends of the Earth Brisbane comented "If the Queensland government were serious about protecting the Great Barrier reef, they wouldn't be expanding the coal industry. Without deep and urgent emissions reductions, reducing runoff to the Great Barrier Reef is like rearranging deck chairs on the Titanic."

According to the Friends of the Earth website - www.sixdegrees.org.au - the 2009-2010 Queensland Budget by Anna Bligh's Labor Party Government has allocated $1,758 million to coal subsidies and expansions compared to $74 million for climate change initiatives and renewables.

Five days earlier to Ms Jones statement, distinguished scientist Professor Ove Hoegh-Guldberg from the University of Queensland gave a presentation in Copenhagen on the threat of extinction facing coral reefs unless CO2 is limited to 350ppm. He said that "Carbon and coral reef ecosystems are not sustainable at temperatures that increase up to 2 degrees above the pre-industrial or concentrations of CO2 above 450ppm." He also qualified this with the observation "that coral reefs don't do well above about 350ppm CO2."

"Eliminating these habitats will inevitably lead to about 10 to 20% of marine biodiversity going extinct. Thats all those organisms that are highly dependant on coral reefs. And losing coral reefs will have enormous issues for 500 million people living in approximately 90 nations." he said. Professor Ove Hoegh-Guldberg was a contributing author to the International Panel on Climate Change (IPCC) report in 2007. Watch the AUSSMC video Professor Ove Hoegh-Guldbergon the flickr website.

According to Bradley Smith "If we are to have a chance of saving the Great Barrier Reef, we need to begin the transition away from coal dependence immediately. By spending $1.5 billion on new coal infrastrucutre this year, the Queensland Government are leading us in the wrong direction and they wont even acknowledge that their actions are a suicide pact for the reef."

"The Government plans to double coal exports by 2030 and is progressing expansion of coal ports at Wiggins Island, Hay Point and Abbot Point. By investing in more coal infrastructure, the Government are locking in huge increases of green house emissions, despite acknowledging that they must be reduced." said Bradley Smith, spokeperson for Friends of the Earth Brisbane, who run the www.sixdegrees.org.au Coal and Climate change website.

Kate Jones promised the "banning the construction of any new coal fired power station in our state that is not using the world's best practice low emissions technology and is not Carbon capture and storage ready."

Two coal-fired powerstations are currently being proposed for Queensland: at Wandoan and Alpha. Bradley Smith called Ms Jones statement - 'Worlds best practice coal' and 'CCS ready' as meaningless spin. According to Bradley these power stations will emit millions of tonnes of CO2 per year, for decades. Indeed, Carbon Capture and Storage is still being researched with no industrial scale pilot plant yet in existance.

The Wandoan power station will source coal from Xstrata's proposal for the largest open-cut coal mine in the southern hemisphere.

A 2008 Greenpeace report - False Hope: Why carbon capture and storage won't save the climate - says that CCS wastes energy by using between 10 and 40% of the energy produced by a power station. At this stage Safe and permanent storage of CO2 cannot be guaranteed with just minor leakage rates undermining any climate mitigation efforts. CCS could lead to a doubling of plant costs, and an electricity price increase of 21-91%., diverting money from sustainable solutions. There are significant liability risks posed by CCS including threats to health, ecosystems and the climate. It is unclear how severe these risks will be.

Kate Jones said "We are also working with our scientists and farmers to develop biosequestration in our vast landscape and we are reducing our household emissions by 30% by 2020 and installing smart meters in millions of Queenslanders homes."

The expansion of the coal mining industry in Queensland is occurring at an unprecedented rate. Exploration and mining encroaches upon the ecological and productive values of landscapes without due process or regard for the economic, environmental and social impacts. This fight is typified in the small Darling Downs town of Felton.

In Felton a mining company is proposing an open-cut mine of 900 million tonne capacity along with an on-site petrochemical plant and a 30m high levee wall. The hills that surround the valley will be removed in order to get at the coal beneath them. Friends of Felton spokesperson Rob McCreath has also said that mining will also risk destroying the underground water aquifers, contribute to the decline of the Murray-Darling system and decimate food production in the valley.

The Governments recently announced (Dec 2, 2009) Land Access Strategy has been criticised by Friends of the Earth: "Even on the face of it, the proposed framework is clearly much more about reducing the negotiation time, cost and investment uncertainty for mining interests than providing protection to landholders. In substance, the framework does little more than consolidate the rights of those undertaking mining exploration, and confirm the lack of rights for landholders."

So while Kate Jones talks about "reducing our household emissions by 30% by 2020", public behaviour to be applauded, productive agricultural land that may with correct farming practices, sequester CO2, is instead being destroyed by expansion of coal mining.

So our politicians are talking green, but largely continuing with business as usual. And unless the hypocrisy and greenwashing stops, and meaningful action is taken to reduce coal mining, and coal-fired electricity production, we can kiss goodbye to one of the natural wonders of the earth - The Great Barrier Reef. It just won't survive in a world 2 degrees Celsius warmer, let alone one 4 degrees warmer that we are currently headed towards with global inaction.

Here is my transcript in full of Kate Jones as recorded by video by the Australian Science Media Centre.

"Queenslanders are by per capita the highest emitters of carbon in the world. So the challenge for our economy, and our people is huge, and that is why we, like all the States and Territories here, are committed to world action on climate change.

"But we as a State are already taking action. We are home to the world's largest reef, the Great Barrier Reef, and that is why we are committing here today to reduce runoff into the reef by 50% in four years. We are also banning the construction of any new coal fired power station in our state that is not using the world's best practice low emissions technology and is not Carbon capture and storage ready.

"We are also working with our scientists and farmers to develop biosequestration in our vast landscape and we are reducing our household emissions by 30% by 2020 and installing smart meters in millions of Queenslanders homes.

"As I said, I can't offer you scotch, I can't offer you wine. But if all us act together we will save the world's largest reef, the Great Barrier Reef. And I invite all of you to come to Queensland and see this reef for yourself, one you have the potential to save.

Takver is a citizen journalist from Melbourne who has been writing on Climate Change issues and protests including Rising Sea Level, Ocean acidification, Environmental and social Impacts since 2004.