by Takver - Australia Indymedia
In response to the failure of climate negotiations in Copenhagen, forty climate activists have closed down the rail line into the world's biggest coal port at Newcastle this morning, (Sunday December 20). Newcastle is located on the east coast of Australia about 100km north of Sydney. They are protesting the failure of the UN climate talks in Copenhagen to produce a just, effective, and legally binding treaty. 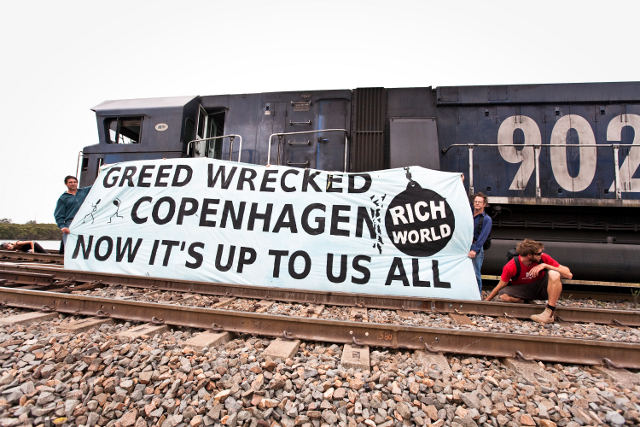 Twenty five of the diverse group - aged from 19 to 86 years and including a Buddhist priest, and an elected local councillor - are occupying a rail bridge in Newcastle, Australia, and refusing to leave. They have hung large banners reading "Greed wrecked Copenhagen: Now it's up to us all", and "You could have done something great."

Three hours into the blockade, police have arrested ten people who were sitting on the rail bridge and refusing to move. Protesters expect the blockade to last for the remainder of the day and perhaps into the night, with a further 15 people still blocking the bridge in difficult to remove positions.