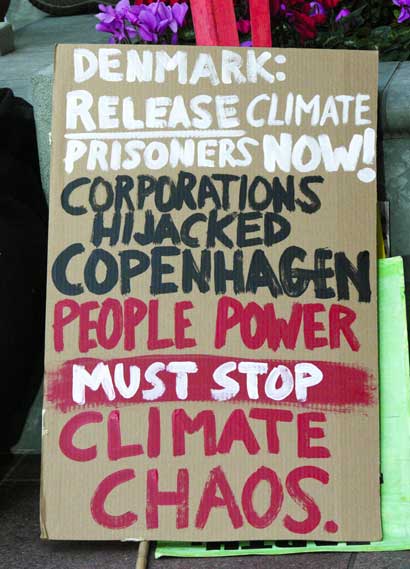 San Francisco, CA – Local residents and Mobilization for Climate Justice West responded today to the failed United Nations Copenhagen climate talks. Community members gathered outside the Royal Danish Consulate for a candle light vigil and rally with prominent speakers. “We are appalled there is no international treaty to save us from catastrophic climate change, that the developing world's demands are being ignored, and because Danish police have attacked, with tear-gas and batons, and arrested over 1,500 climate activists,” said Amanda Starbuck, Rainforest Action Network, a speaker at the event.

Today’s event followed a Thursday meeting with Ms. Helle Van Brunt of the Royal Danish Consulate. At the meeting, concerned citizens delivered a letter demanding the Danish Parliament and Prime Minister Lars Løkke Rasmussen to release imprisoned climate activists, halt criminalization of protesting in Copenhagen, and to lift bans on non-governmental organizations at the negotiations.

“I am outraged and shocked by the lack of leadership in Copenhagen,” said Konrad Fisher at Friday’s event. “Critics of corporate-friendly climate policy have suffered from undemocractic repression, and the world needs to know about it.”

Rally attendees sand, held aloft a giant parachute banner, lit candles and listened to speakers, including Marc Handley Andrus, Bishop of the Episcopal Diocese of California; Patrick Bond, co-editor of the book Climate Change, Carbon Trading and Civil Society; and Michelle Chan, Friends of the Earth, one of several non-governmental organizations barred from Copenhagen negotiations. Speakers discussed human rights issues and the refusal of the United States and other developed nations to commit to realistic emission reduction targets or adequately pay for the impacts from past climate pollution.

Mobilization for Climate Justice joined international networks Climate Justice Action and Climate Justice Now!, and thousands of other protesters around the world Friday, in declaring that the negotiations did not address vital issue of our unsustainable reliance on fossil fuels. Event organizers feel that developed nations have not acknowledged the ecological debt owed to developing nations, but instead put corporate profits before public welfare. These sentiments reflect the outcry from many organizations that criticized the negotiations for being undemocratic, marginalizing people most affected by climate change, and failing to address the climate crisis.
###

The Mobilization for Climate Justice West is a part of a North America-based network of organizations and activists who have joined together to build a movement that emphasizes non-violent direct action and public education to promote effective and just solutions to the climate crisis. 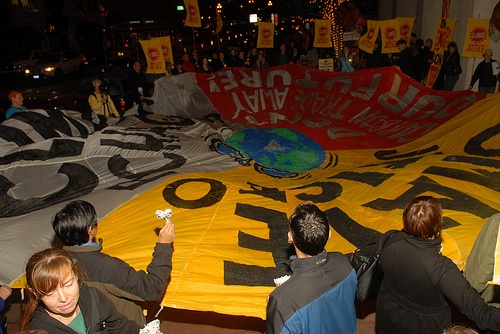 "First the US came to Copenhagen with nothing new to offer, and now it's trying to package the weak, flawed, unjust 'Copenhagen Accord' as a replacement for the UN process -- and armtwist poor countries into signing on.

"Countries seeking a just and effective solution to climate change should not sign this illegitimate and distracting 'Copenhagen Accord.' They should instead ensure a rapid return to the formal UN process to achieve a fair, strong and legally binding agreement as soon as possible within the next year.

"Developing countries have shown real leadership in Copenhagen and must not give up the UNFCCC for the 'Copenhagen Accord.' " 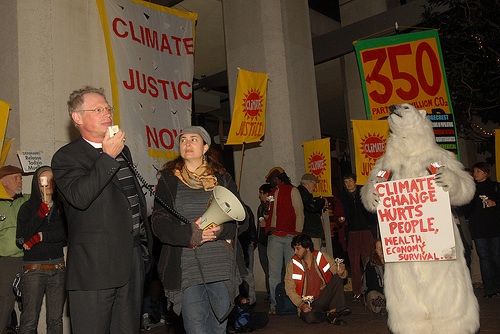 Reverend Marc Handley Andrus, Bishop of the Episcopal Diocese of California is an active member of Bishops Working for a Just World and an outspoken advocate for environmental and economic justice. 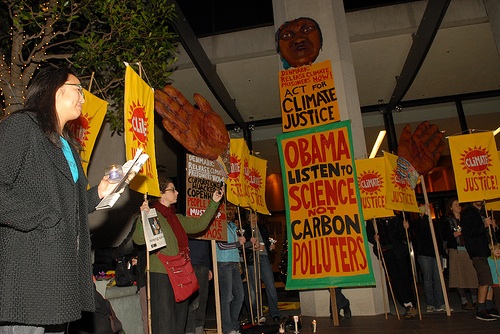 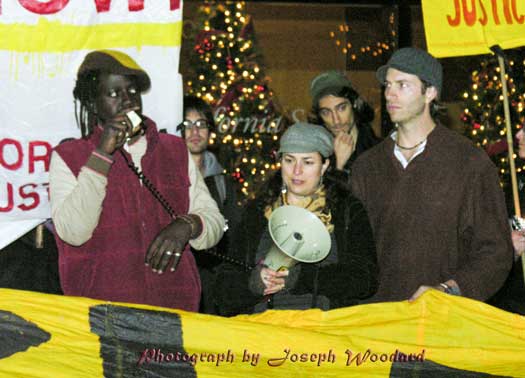 Ashel Eldridge of the Oakland Resilience Alliance leading the crowd in singing. MC Allie Starr of Art in Action stands next to Ashel with bullhorn. 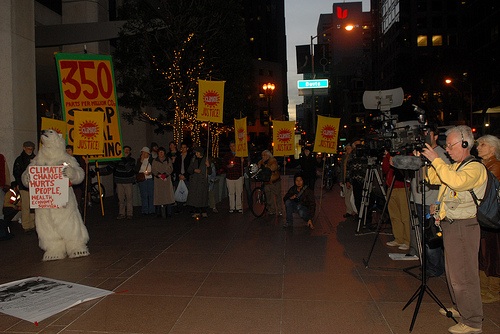 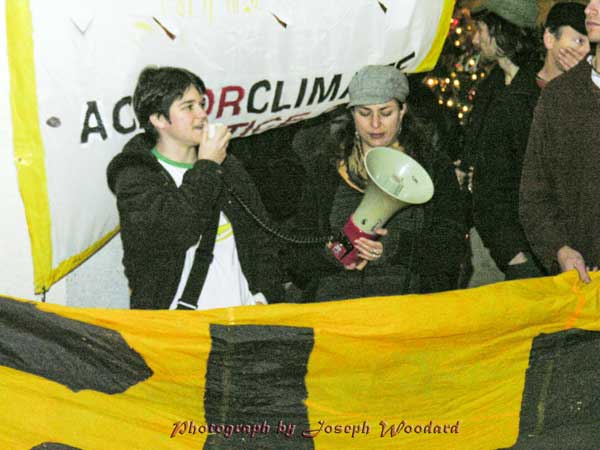 Christie Keith, The Global Anti-Incinerator Alliance (GAIA) just returned from Copenhagen, speaks of the waste pickers delegation she worked with. Wastepickers actually sorted the massive waste inside the UNFCCC meeting in Copenhagen to stress the importance of recycling to reduce greenhousegas emissions. 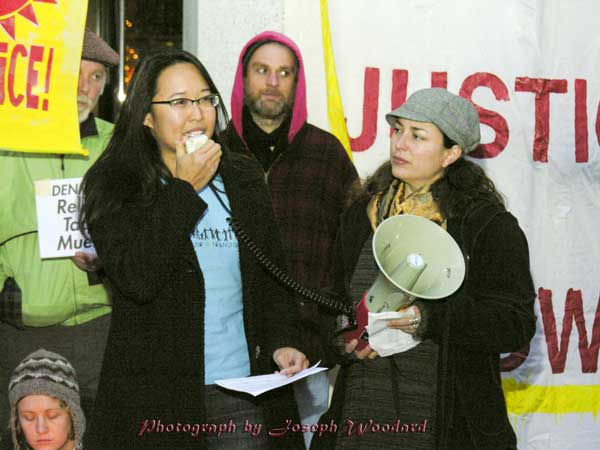 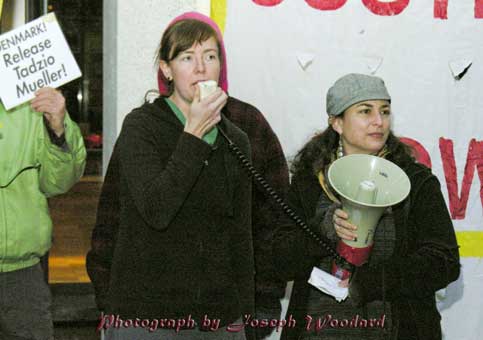 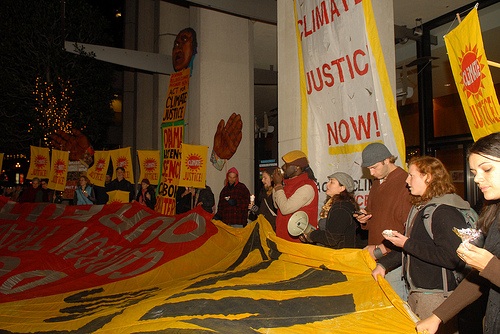 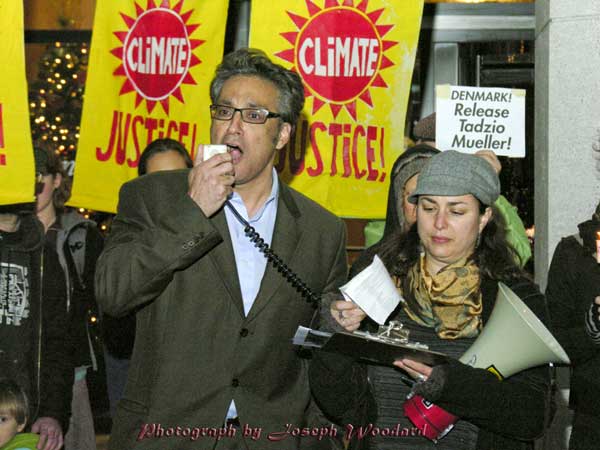 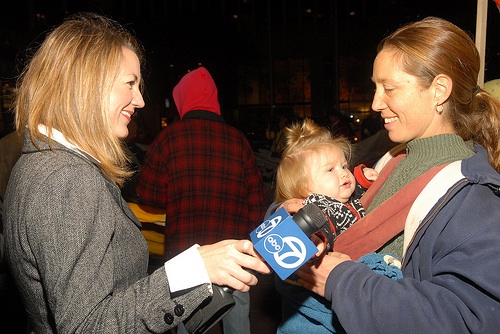 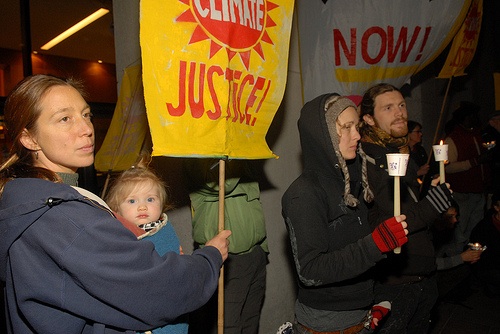 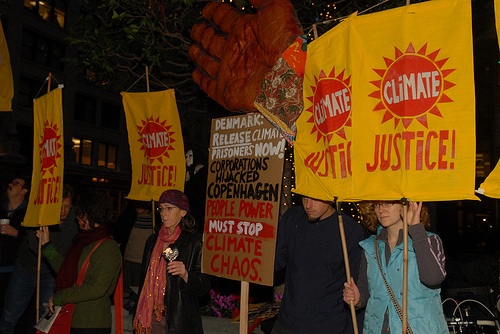 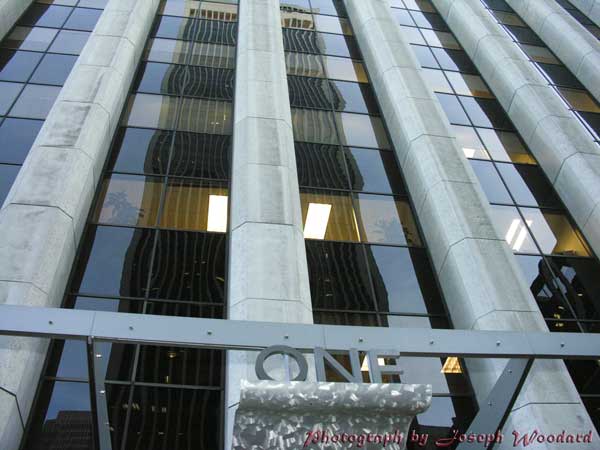 Danish Consulate of San francisco, located inside One California St. in the cities financial district. 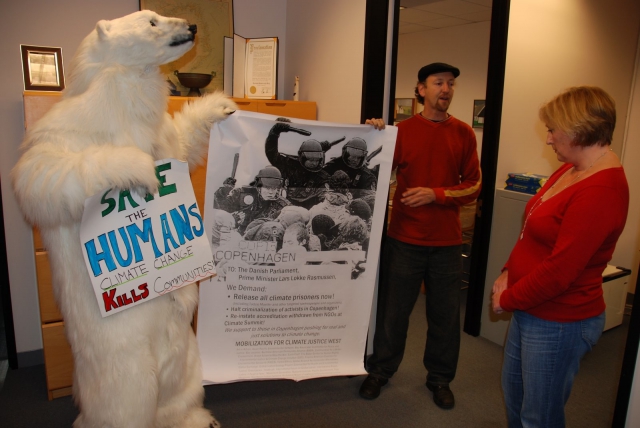 original image (1600x1071)
Mobilization for Climate Justice West, Greenpeace, 1Sky volunteers, and Climate Justice Fasters (and a "Save the Humans" bear) meet with Royal Danish Consulate Officer Helle Van Brunt the day before the protest. Text of letter delivered to Royal Danish Consulate, San Francisco on 23 by 6 foot paper with the enlarged associated press photo of NGO delegates outside the Bella Center being beaten by Danish Police:

We Demand:
• Release all climate prisoners now!
(Including Tadzio Mueller and other targeted spokespeople and organizers).
• Halt criminalization of activists in Copenhagen!
• Re-instate accreditation withdrawn from NGOs at Climate Summit!

We support to those in Copenhagen pushing for real and just solutions to climate change. 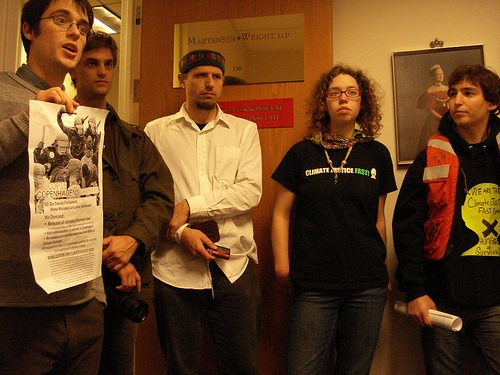 The delegation told her we would be holding a protest in front of her Consulate. The Consul Officer was embarrassed of her government and promised to mail the large letter to her Prime Minister in a tube and send an electronic version as well. 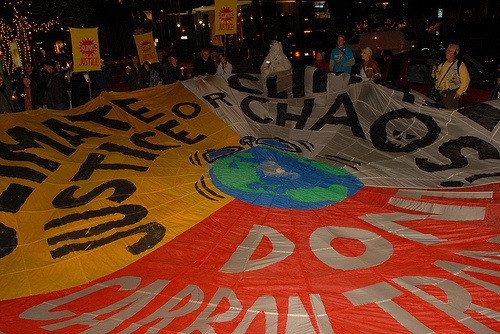 Photo: ko ko lay
http://www.actforclimatejustice.org/west
Add Your Comments
LATEST COMMENTS ABOUT THIS ARTICLE
Listed below are the latest comments about this post.
These comments are submitted anonymously by website visitors.