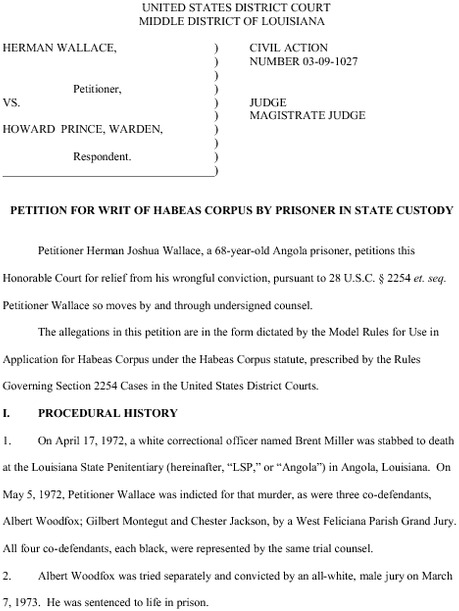 Download PDF (297.5KB)
The petition asserts: "...129. Mr. Wallace has been convicted of murder and sentenced to life in violation of the Fifth, Sixth, Eighth and Fourteenth Amendments to the United States Constitution."

One excerpt states: “…93. The factual scenario presented to Mr. Wallace’s jury in 1974 was entirely different than it would have been if the State had honored its constitutional obligation to disclose materially favorable evidence to the defense. Post-conviction proceedings have revealed that—in a case where the prosecution relied exclusively on inmate testimony to secure a conviction—the State purposefully withheld evidence of deals, perjured testimony, and prior inconsistent statements. This evidence would have discredited each and every one of the State’s witnesses.”

One more excerpt states: “…123. In addition to the State’s suppression of deals, false testimony and prior inconsistent statements with respect to the inmate witnesses who testified against Mr. Wallace, the State also failed to disclose statements by other witnesses that would have undermined the State’s case.”

However, in May 2008, in a 2-1 vote, the State Appeals Court rejected Morgan's recommendation and refused to overturn the conviction. Herman appealed this to the State Supreme Court, but on October 9, 2009 the Court ruled against Herman and affirmed the conviction.