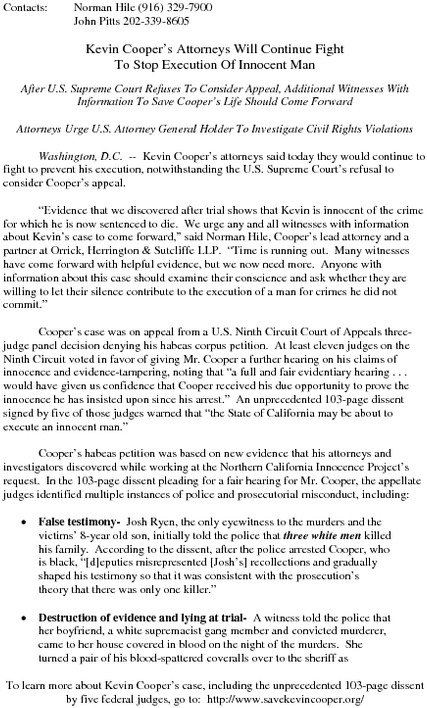 The United States Supreme Court announced Monday morning that they will uphold the Ninth Circuit Court of Appeals decision to deny the appeal of California death row prisoner Kevin Cooper. The decision by the Ninth Circuit Court was bitterly divided, and one of the many dissenting justices, Judge W. Fletcher, wrote, “The State of California may be about to execute an innocent man.” The dissenting justices wrote over 100 pages to detail the evidence pointing away from Kevin Cooper as the perpetrator of the 1983 murders for which he was convicted, and pointing to other probable guilty parties. The dissent also detailed how the state district court “impeded and obstructed Cooper’s attorneys at every turn.”

Cooper and his supporters hoped that the Supreme Court would agree to hear his case based on the issues of his actual innocence and based on the constitutional violations in his case. The Innocence Network, California Attorneys for Criminal Justice and the California Public Defenders Association filed amicus curiae, or "friend of the court," briefs, on behalf of Cooper's innocence. The case has a long history of police and prosecutorial misconduct, evidence tampering, and numerous constitutional violations including multiple Brady violations (the prosecution withholding exculpatory evidence from the defense.)

The questions that Cooper asked the United States Supreme Court to decide are important: Is an innocent person eligible for execution? When a district court has been ordered to hold a hearing on the evidence of innocence, what process is required to ensure a full and fair hearing? Since courts have used various thresholds of innocence claims to award or deny relief, what standard of innocence applies?

Activists expressed anger and disappointment in the Court’s ruling. Crystal Bybee, of the Campaign to End the Death Penalty, said Monday, “The fact is that Kevin Cooper is an innocent man. Shocking misconduct by police and prosecutors has characterized this case from the beginning.”

Bybee further stated that the Kevin Cooper Defense Committee, a coalition of Cooper’s supporters, will continue to fight on Cooper’s behalf to prove his innocence: “Kevin Cooper has been denied justice again and again. Is California about to do what Texas did in the Cameron Todd Willingham case – execute an innocent man? We won’t let that happen.”

More information about the Kevin Cooper is available at http://www.savekevincooper.org.

##
http://www.savekevincooper.org
Add Your Comments
Support Independent Media
We are 100% volunteer and depend on your participation to sustain our efforts!