by Takver - Climate Indymedia
The latest global assessment of carbon dioxide emissions from human activities shows emissions still rapidly increasing according to a paper published in Nature Geoscience by 31 authors from the Global Carbon Project. This increases the importance for meaningful negotiations on emission reduction targets and a legally binding international climate treaty from Copenhagen to start reducing emissions. 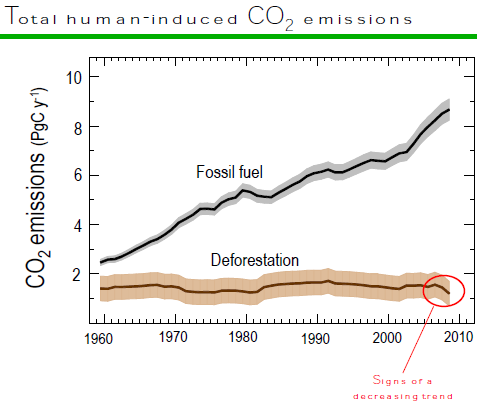 Lead author Prof Corinne Le Quéré of the University of East Anglia (UEA) and the British Antarctic Survey said: "The only way to control climate change is through a drastic reduction in global CO2 emissions. The Earth's carbon sinks are complex and there are some gaps in our understanding, particularly in our ability to link human-induced CO2 emissions to atmospheric CO2 concentrations on a year-to-year basis. But, if we can reduce the uncertainty about the carbon sinks, our data could be used to verify the effectiveness of climate mitigations policies."

Dr Mike Raupach, Co-Chair, Global Carbon Project and Principle Research Scientist, CSIRO Marine and Atmospheric Research, said in a Sydney Press Conference "The current growth in carbon dioxide (CO2) emissions is closely linked to growth in Gross Domestic Product (GDP). CO2 emissions from fossil fuel combustion are estimated to have increased 41 per cent above 1990 levels with emissions continuing to track close to the worst-case scenario of the Intergovernmental Panel on Climate Change (IPCC)."

"There will be a small downturn in emissions because of the GFC, but anthropogenic emissions growth will resume when the economy recovers unless the global effort to reduce emissions from human activity is accelerated." said Dr Mike Raupach.

The main findings of the study include:

Dr Pep Canadell from the CSIRO and an executive director of the GCP and one of over 30 scientists involved in the delivery of the paper said in a CSIRO podcast said that the paper stressed what scientists have been saying the last few years. "The urgency to take action in mitigation. The reason is that we have now an early period where the natural carbon sinks are still removing almost 50 per cent of all carbon dioxide admitted into the atmosphere. As time progresses into the future these sinks are actually declining in efficiency and therefore the size of the effort of carbon mitigation that we'll need to do, the longer we wait the bigger will be."

"The message is that there is absolutely no time to lose in starting a very aggressive emission reductions globally. As I said, it seems efficiency is slowing down and we don't want to delay the process that is starting. We know already the clear impacts of climate change and we are most concerned in that pushing the system to much higher levels of CO2 may actually trigger a number of processes which then will be much more difficult to stop or to stabilise..." said Dr Pep Canadell.

Atthe media conference in Sydney Dr Mike Raupach outlined how Australia's emission's compare to the rest of the world : "we have emissions per person which are approximately 4 and a half times the global average per person emission rate. Of course because we don't have that many people compared to the whole world, we have a total emission of 1.4%. of the world. ... We are a disproportionate emitter per person." Unlike many other western developed countries Mike Raupach said that emissions are still increasing around 2% per year in Australia. "That compares with much much higher emissions in developing countries such as China and India."

The world has yet to begin the serious task of emissions reduction. To avoid dangerous climate change (more than 2 degrees warming) emissions must peak within the next 10 years and then decline by more than 3% per year for many decades. Develpoed nations need to peak earlier with a higher reduction in emissions.

The recent Barcelona negotiations were deadlocked with developed nations refusing to present emission reduction targets, and deveoping countries demanding those targets be on the table before they negotiated.

A climate breakfast hosted by Australian Prime Minister Kevin Rudd and Mexican President Felipe Calderon at the Asia Pacific Economic Cooperation (APEC) forum in Singapore on November 15 conceded that a legally binding agreement at Copenhagen was unlikely. Danish Prime Minister Lars Loekke Rasmussen flew in for the breakfast, and presented the forum with a proposal of a 2 stage process of a general political agreement in Copenhagen, and perhaps a treaty at the next Climate conference in November 2010 in Mexico. Climate negotiations are stalled between developed and developing countries over emission targets and financial packages to assist with mitigation and adaption in developing countries.

Hopes for a more concrete agreement increased with reports of a meeting between President Obama from USA and China's Hu Jintao that they aimed to make real progress in tackling climate change at next month's UN climate summit through "an accord that covers all the issues in the negotiations and one that has immediate operational effect". Obama and Hu also agreed to etablish a $150 million joint US-China Clean Energy Research Center, which will focus research on building energy efficiency, clean coal including carbon capture and storage, and eco vehicles.

"Today's agreement by the US and China recognising that major progress on tackling climate change can still be made in Copenhagen is a positive development following weeks of lowered expectations - both nations must now use their substantial political clout to make this happen." said Friends of the Earth's UK Executive Director Andy Atkins.

"At the very least the world's richest nations must agree to substantially slash their emissions between 2012 and 2016 - as most of them are legally obliged to do under the Kyoto climate treaty - and agree a comprehensive finance and technology package to allow developing countries to develop cleanly and deal with the impacts of climate change." said Andy Atkins.

The International Energy Agency has recently stated that every year of delay in not implementing global emission reduction targets will cost the world about $500 billion in terms of the adjustment that is needed to be made to reduce carbon emissions over the decades.

Related Categories: International | Environment & Forest Defense
Add Your Comments
Support Independent Media
We are 100% volunteer and depend on your participation to sustain our efforts!