Governor's Office Photo: Governor Arnold Schwarzenegger held a press conference at the Set Back Levee on the Sacramento-San Joaquin River Delta in Isleton, California to sign SBX7 1 by Senator Joe Simitian (D-Palo Alto), the final bill of the package that will lead to the destruction of the Delta. Of course, the locals weren't invited to witness the signing of the death warrant for the Delta. From left to right: California Hispanic Chambers of Commerce President and Chief Executive Officer Joel Ayala, Governor Arnold Schwarzenegger and Senate President pro Tem Darrell Steinberg. 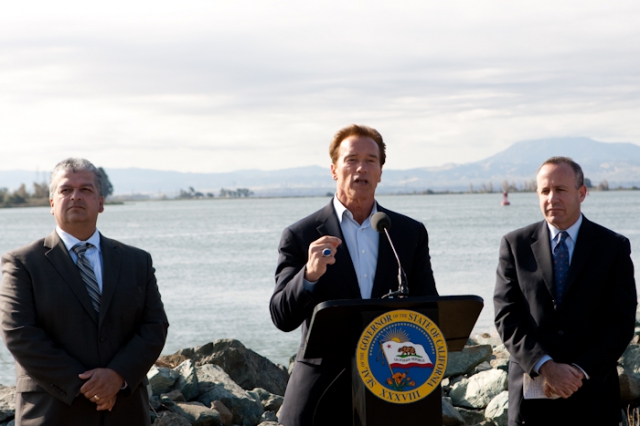 After an all night session, the California Legislature on November 4 passed a water package including an $11.1 billion bond that provides a clear path to the construction of the peripheral canal and more dams. Governor Arnold Schwarzenegger then signed the bills that he described as "an historic legislative package to reform and rebuild California's water system" during a series of press conferences and highly choreographed photo opportunities over the past week.

While Schwarzenegger and Senate President Pro Tem Darrell Steinberg lauded the package for being an “historic compromise,” Delta legislators, fishermen and Indian Tribes slammed the legislation for leading to the destruction of the Delta, its farms and its fish.

"Water is the lifeblood of everything we do in California," said Schwarzenegger. "Without clean, reliable water, we cannot build, we cannot farm, we cannot grow and we cannot prosper. That is why I am so proud that the legislature, Democrats and Republicans, came together and tackled one of the most complicated issues in our state's history. This comprehensive water package is an historic achievement."

Schwarzenegger praised the efforts of his Democratic collaborator, Darrell Steinberg, to push the water policy and bond package through the legislature. "He has been a tireless leader, a relentless advocate for the environment and a true statesman,” said Steinberg.

Steinberg claimed the legislation enacts “landmark improvements to the environment and investments in the Sacramento-San Joaquin Delta – the heart of California’s water supply system – to ensure the restoration of the Delta’s fragile ecosystem while enhancing water reliability for all Californians.”

“Over the last several decades, numerous efforts to comprehensively address the state’s water problems have consistently failed,” Steinberg gushed. “But the Senate this week rose to the occasion, overcoming enormous regional, philosophical, and political obstacles to forge an historic, bipartisan compromise.”

On October 11, Schwarzenegger issued a proclamation calling for the legislature to meet in an extraordinary session to address California's water crisis, in effect strong arming the legislature to pass the water package that he wanted.

While the Legislature approved the water policy and bond measures, they killed a bill by Assemblywoman Alsyon Huber that would prohibit the construction of a peripheral canal around the Sacramento-San Joaquin Delta without a full fiscal analysis and a vote of the state legislature.

“I offered up a simple bill, a common sense approach,” Huber stated. “Unfortunately, my bill was killed without a hearing.” She vowed that she will resubmit this bill so it will have a full debate.

“I opposed the water package because it creates a new layer of bureaucrats who will make decisions on water that will impact the communities I represent, without allowing us to have a voice, “ she emphasized. “I opposed the bond, especially because of the billions in pork for LA. This dead of night pork giveaway is exactly why voters give us low marks.”

Barbara Barrigan-Parrilla, campaign director of Restore the Delta, agreed with Huber’s assessment. “The package lost any semblance of rational debate and turned into a pork festival with the water bond ballooning to over $11 billion dollars. With our state already facing a massive debt and more red ink on the horizon, how can we afford this?”

The $1.7 allocated for watershed conservation includes $250 million for California's portion of funding to remove four dams on the Klamath, directly linking Klamath Dam removal to building the peripheral canal and Temperance Flat and Sites reservoirs.

Representatives of fishing groups were outraged by the passing and signing of the bills. "Today is a sad day for the San Francisco Bay/Sacramento-San Joaquin Delta estuary," said Roger Mammon, board member of Restore the Delta and the West Delta Chapter of the California Striped Bass Association, the day the bill passed. “The implications are unbelievable and could possibly lead to the worst ecological disaster to ever hit the United States."

The passage of the water package could not have taken place without the back room negotiations that large national environmental groups, including the Natural Resources Defense Council, Environmental Defense and the Nature Conservancy, made with Westlands Water District, Metropolitan Water District, Steinberg and Schwarzenegger to craft the package.

Laura Harnish and Spreck Rosecrans of Environmental Defense, strong supporters of the water policy package, said “It is important to realize that the legislation does not authorize a peripheral canal.”

However, the legislation sets up a Delta Stewardship Council of seven members, 4 of whom are appointed by the Governor. The Governor reaffirmed that he wants to build a peripheral canal at a press conference in Stockton the same day the package was passed, so you can be sure that he will make the canal’s construction a priority for the council members he appoints. In addition, the water bond sets up the infrastructure that will be used in tandem with the canal.

Major unions including the California Teachers Association and SEIU, the five Delta counties and regional governments throughout the Sacramento region opposed the legislation also.

During the water package's development, the Planning and Conservation League (PCL) had insisted that any solution focus on reducing reliance on an already over-allocated Delta and require dedicated in-stream flows through the Delta and the San Francisco Bay for endangered and threatened fish populations.

“The package missed the mark on both fronts,” said Charlotte Hodde, water policy coordinator for PCL. “Instead of guaranteeing the flows that species in the Delta need to recover, the package provides no regulatory assurance that the water will be there. Even the legislators' own staff analyzed this portion of the bill as unenforceable. This will only worsen the fishery collapse and may lead to even more restrictions on water supply exports from the Delta.”

The plans by Schwarzenegger and Steinberg to build the canal in order to export more water from the Delta to agribusiness and southern California will be met by years of lawsuits, protests, direct action and other resistance by the communities impacted. When the $11 billion water bond goes to a vote by the taxpayers, I predict that it will be voted down just like the peripheral canal initiative was defeated in 1982.

“There is no way that when the state is cutting budgets for schools, fire departments, health care for children and other services that the voters are going to approve an $11 billion bond that will create a total ecological nightmare,” said Mark Franco, headman of the Winnemem Wintu Tribe at the California Tribal Water Summit that began just hours after the legislation passed. “The children of our tribe have suffered for seven generations and now our children for seven generations ahead will be paying for this if this measure is approved.”

“We will continue to use every means possible to oppose this package which sets in motion the canal and allows an unelected body to make key decisions that will impact our Delta Communities, while we are left on the sidelines,” Barrigan-Parilla concluded. “It’s no wonder Californians have such a low opinion of their elected representatives.”

For more information about the battle against the peripheral canal, go to http://www.restorethedelta.org.