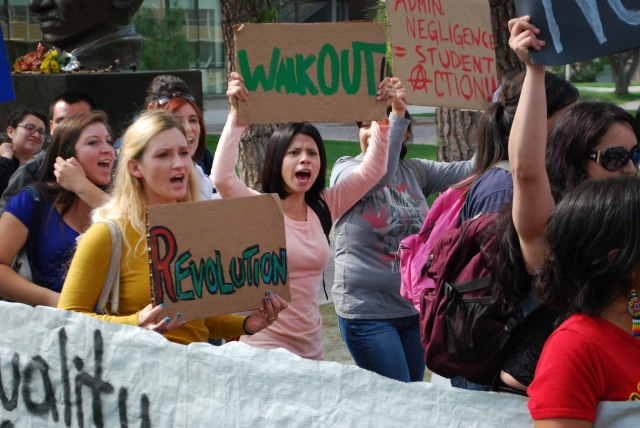 original image (3872x2592)
On October 21, 2009 - hundreds of students at Fresno State walked out of their classrooms and held a rally at the university’s Peace Garden to protest the massive cuts to higher education and the California State University system. Students voiced their concerns with the unprecedented tuition increases, canceled classes, furloughed faculty and staff, and reduced enrollment opportunities. They then took their message to the sidewalks and streets of the campus calling out to students, faculty, and staff to take a stand and join the walk out. Many did. By the time the march reached Shaw and Cedar Avenues, all four street corners were overflowing with students speaking out on behalf of themselves and the future of higher education in the state. “I hope that this walkout will increase community awareness that the budget cuts to the CSU are delaying our graduations, forcing would-be students out, and creating a precedent that "its ok" to cut education when really funding education gives back in more ways than one,” explained Whitney Thompson, a women’s studies major at Fresno State and a spokesperson for Students for Quality Education, the organization spearheading the event. At the end of the march, the students presented Dr. Welty with a list of demands, which Welty indicated he would address at a later meeting.

California is indeed facing a crisis of higher education, and the current solutions to the crisis being offered by the Chancellor’s office and administrators are only exacerbating the problems.

For the first time in Fresno State’s history all admissions, including transfers, have been canceled for the spring semester. In Fall 2010, the university announced that it will reduce enrollment by approximately 400 eligible students. The CSU system-wide is calling for a reduction of enrollment by 40,000 students over the next two years. High school students who have been told that if they do well in school they can earn a college degree are facing a broken promise because meeting the minimum eligibility requirements will no longer guarantee a student a place in the CSU.

For those students lucky enough to secure a seat in the classroom, they face the prospect of continued tuition hikes. Just this past year, students saw a 32% increase in their fees. This comes on top of multiple fee increases the last several years. Since 2002, tuition has increased 182%. Just recently the Chancellor’s office and the Board of Trustees announced the possibility of an additional 10% increase next year.

These tuition increases and cuts to enrollment come in spite of faculty and staff furloughs resulting in a 10% cut to employees’ salaries. These efforts were suppose to save jobs and classes, but it is not clear that the money is staying in the classrooms. At Fresno State over 1000 classes were canceled fall semester and over 200 lecturers were laid off. Students and faculty face even more course cancellations and layoffs for spring semester.

Layoffs, furloughs, tuition increases, course and enrollment reductions are the primary solutions the CSU administration has proposed to address the budget shortfall. Very little pressure has been placed on the Governor and the state legislature to make higher education a priority.

One possible solution before the state legislature is AB 656. The bill is sponsored by Assembly Majority Leader Alberto Torrico (D-Fremont), and proposes to levy an extraction tax on natural gas and oil companies who profit from our state’s natural resources. This money would then provide a reliable funding source for higher education. California is the only major oil-producing state that does not levy an extraction tax. By contrast, in Texas public universities receive more than $400 million a year in revenue from mineral and oil rights. The California Faculty Association supports the passage of this bill and the Students for Quality Education organization supports the passage of this bill.

Remarkably, the CSU administration has not come out in favor of this bill.

The CSU is the people’s university—it was created as a part of California’s master plan to ensure a public higher education system that would extend access to all the citizens of the state who desired it. In particular for the CSU, the mission was to serve those populations that have been historically underserved: first generation college students, students of color, women, working and middle-class families. This is what is at stake in this crisis, and what is needed is a groundswell of support to stand alongside these students fighting for their future and the future of the state. It is time to revitalize the state’s commitment to public higher education. To voice your support of AB 656, go to http://tinyurl.com/isupportAB656

Diane M. Blair is an Associate Professor in the Department of Communication at California State University, Fresno and Vice President of the California Faculty Association. She can be reached at 559-278-8578 or dblair [at] csufresno.edu 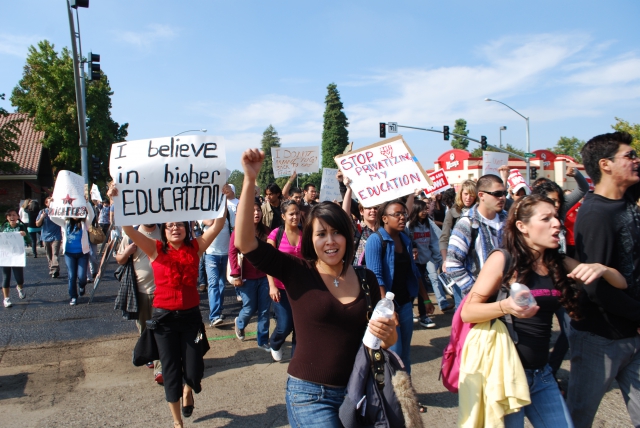 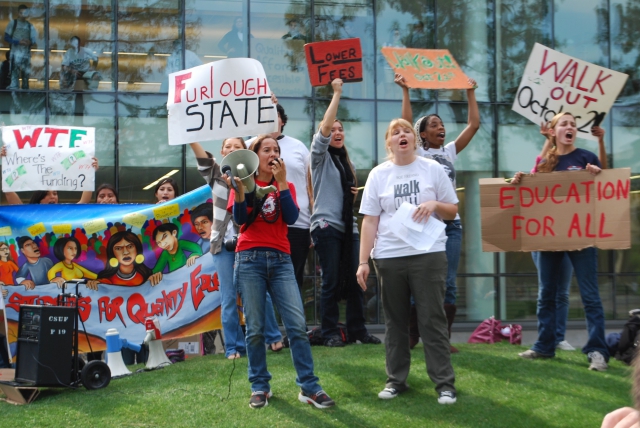 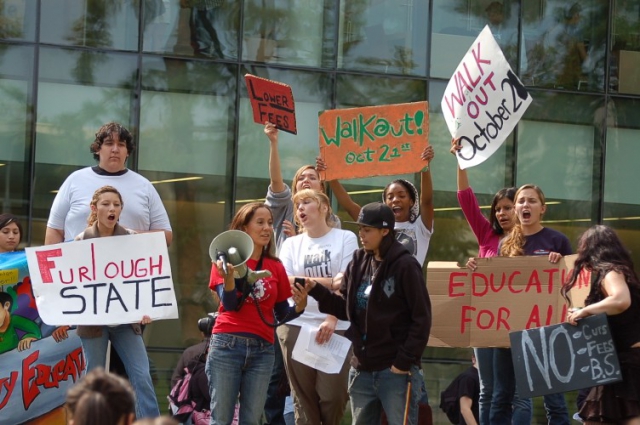 original image (752x500)
http://tinyurl.com/isupportAB656
Add Your Comments
LATEST COMMENTS ABOUT THIS ARTICLE
Listed below are the latest comments about this post.
These comments are submitted anonymously by website visitors.