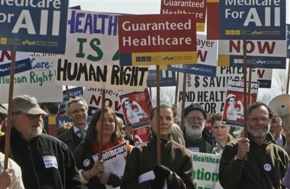 We all know the American health care system is broken and that our nation deserves much better. Despite a national debate on health care - real reform is in jeopardy.

The insurance companies are spending millions to confuse and scare the public to keep us from ending their grip on our health and our money. With tea bagger town hall protestors and the right-wing noise machine on one side and elected officials from both parties putting insurance industry profits ahead of the necessity of the people, the defenders of the status quo are winning. We can't let that happen. It's time to take the fight to the real villain in the health care debate. It's time for a campaign of nonviolent civil disobedience to turn the tide.

On September 29th in New York City, the Mobilization for Health Care for All is launching a campaign of "Patients Not Profit" sit-ins at insurance company offices to demand an end to a system that profits by denying people care and puts insurance company bureaucrats between doctors and patients. We want the real "public option": improved Medicare for All, a national single payer plan that cuts out the profit and puts patients first.
Private insurance death panels are killing people every day and blocking real health care reform.

It's time for nonviolent civil disobedience to turn the tide.

Sign up to sit in for Patients Not Profit!

The private health insurance companies are the real death panels in America. They make billions in profit and millions for their CEOs while millions of Americans have no health insurance and over 45,000 die every year because they can't get the care they need. That's more than 120 people dying every day.

So beginning on September 29th in New York City, and continuing in Chicago on October 8th and in cities across the country on October 15th, over 100 people will put our bodies on the line to challenge the real death panels. We will enter the offices of the major insurance companies and demand that they cover the care they are denying to their members. We won't leave until they do - or we're arrested. Visit http://www.MobilizeforHealthCare.org and sign up.

Just like the lunch counter sit-ins in the civil rights movement did for segregation, our sit-ins can make it impossible for the United States to ignore how outrageous the status quo of private insurance is. We want to save the lives of some of the people who are being denied critical care today but we know we can save countless lives in the years to come by putting a spotlight on just why our system is broken and how urgently we need fundamental change -- a national health program funded by a single payer.

It only takes a small group of people to do a sit-in in your community, but our actions can inspire every American who has been abused by the insurance companies and believes it's time for real reform to stand up and fight for it. If you are a patient who has been denied care, sign up and let us know. If a friend, neighbor or relative has been denied care urge them to contact us. This campaign of nonviolent civil disobedience will continue until the insurance companies no longer stand between the American people and the health care that is our right.

Already, patients in need of care, nurses, doctors, and people just like you are signing up to be one of the 100 ordinary but courageous people who will launch this battle to end private health insurance abuse and win health care for all. Join us! We can't wait any longer - every day more people die because of the insurance company death panels. Now is the time to do whatever it takes to win this fight once and for all.

Sign up to sit in and join the battle today at http://www.mobilizeforhealthcare.org.

Center for the Working Poor

The Mobilization for Health Care for All is a nonviolent campaign initiated by Healthcare-NOW!, Prosperity Agenda, and the Center for the Working Poor.

http://www.mobilizeforhealthcare.org.
Add Your Comments
LATEST COMMENTS ABOUT THIS ARTICLE
Listed below are the latest comments about this post.
These comments are submitted anonymously by website visitors.