Photo of Bass and Steinberg courtesy of Darrell Steinberg's office. 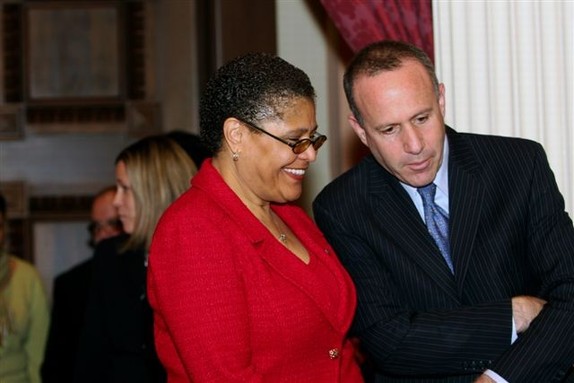 The conference committee will vote on a package of five water bills that Delta advocates believe will serve as a “road map” to the canal. Conspicuously missing from the 14 member committee are Delta Legislators critical of the canal and water package including Senator Lois Wolk (D-Davis), Assemblymember Mariko Yamada (D-Davis), Senator Mark DeSaulnier (D-Concord), and Assemblymember Alyson Huber (D-El Dorado Hills). The vast majority of committee members are from southern California and the San Joaquin Valley.

“I’m confident the Assembly’s conference committee members will attack the decades-old challenge before us with gusto and with the goal of producing a responsible and comprehensive plan that ensures a safe, clean and sufficient water supply for California that meets the needs of our environment and our economy,” Karen Bass said. “It’s a difficult challenge but do-able -- and do-able in the right way.”

However, opponents of the canal were outraged that the committee appears to be stacked to produce a pre-determined outcome – the peripheral canal and increased water diversions to corporate agribusiness and southern California at the expense of Delta farms and collapsing Central Valley salmon and Delta fish populations. Sacramento River chinook salmon, green sturgeon, Delta smelt, longfin smelt, striped bass, Sacramento splittail, American shad and striped bass have declined to record low population levels in recent years, due to massive increases in Delta water exports and declining water quality.

“Not a single member of the State Legislature who represents the heart of the Delta or is committed to protecting it has been assigned to the Water Conference Committee." said Barbara Barrigan-Parrilla, campaign director of Restore the Delta (http://www.restorethedelta.org). “It also appears that the majority of the Senate appointments are not only pro-canal, but they support making large expenditures for water infrastructure at a time when the state is in a great economic crisis.”

“The omission of Legislators from the Delta is a grievous oversight,” said Bill Jennings, executive director of the California Sportfishing Protection Alliance (http://www.calsport.org).

Steinberg yesterday announced that the first conference committee meeting would take place at 3 p.m. Tuesday, but that hearing was cancelled. The committee was rescheduled to meet today, September 2, at 9:00 a.m. in State Capitol room 4203. It will also meet Thursday and Friday upon call of the chair in the same room, room 4203.

A broad coalition of recreational fishing groups, commercial fishing organizations, environmental groups, Delta farmers and California Indian Tribes is opposing the Legislature's attempt to push through a water package that they say would reshape California water policy and support the construction of a peripheral canal, Governor Arnold Schwarzenegger’s “Big Ditch.” They characterize the water deal as “backdoor attack” on 130 years of California water law and legal precedent and the Public Trust Doctrine.

“The similarities between this backroom water deal, which has left Delta communities and fishing representatives out of the process, and energy deregulation are startling,” said Barrigan-Parrilla. “The proposed package would allow the legislature to give up their authority on oversight and costs regarding future decision regarding the Delta (including new conveyance) to a seven member appointed council, with six of the appointees coming from outside the Delta.”

The Council would have the authority to authorize the construction of the peripheral canal. A draft economic report by Steven Kasower of the Strategic Economic Applications Company, released to the California Legislature last Tuesday, reveals that the costs for the construction of a peripheral canal around the California Delta or a tunnel under the estuary would be much higher than previously estimated, ranging from $23 billion to $53.8 billion depending upon the conveyance facility.

“The canal, a 48-mile long ditch comparable in size to the Panama Canal, won't make more water for California,” Barrigan-Parrilla stated. “It will just ship water from the north to Western Central Valley Agribusiness - at the expense of Delta fisheries and Delta family farmers.”

Jennings slammed Steinberg's cynical attempt to ram the water bills through the Legislature for political gain. "Steinberg seems to believe that, given the Legislature's current 9-11% approval rating, a water package is essential in order to improve the public's perception of the Legislature - regardless of merits of the bills - regardless of their effects on one of the great estuarine treasures of the world," he said.

Jennings also said the push for the canal is "sadly reminiscent" of the "mad rush" to the $50 billion energy deregulation fiasco. "If Steinberg wishes to avoid becoming the Senator Peace, of energy deregulation fame, perhaps he should consider that a vast majority of his constituents are opposed to a peripheral canal,” he concluded.

A poll of 800 registered voters throughout California released Monday indicates all segments of voters are strongly opposed to a Peripheral Canal and nearly half oppose a bond for new dams, reservoirs or other water infrastructure projects. The poll also disclosed that voters believe that ensuring a long-term reliable water supply is a "very high priority."

Ruth Bernstein and Tom Patras of EMC Research in Oakland, CA conducted the statewide voter survey on water issues on behalf of Restore the Delta from August 23-27, 2009. For a full copy of the report, go to http://www.calsport.org/DeltaWaterPollMemo.pdf

“There are better ways in terms of cost and environmental effectiveness to make more water for California, such as water recycling, floodplain restoration, groundwater cleanup and desalinization, stormwater capture and reuse,” stated Barrigan-Parrilla. “This needs to be the center of California's water policy, especially in an era of excessive deficits.”

Barrigan-Parrilla and Jennings urged everybody concerned about the future of the Sacramento-San Joaquin Delta and its imperiled fish populations, farms and people to immediately contact Senate President pro Tem Darrell Steinberg to make clear their displeasure with his promotion of this water package. His Capitol office number is (916) 651-4006.

To sign an on line petition against the peripheral canal and to send a quick email to committee chairs, go to http://www.calsport.org.