Add an Event
Newswire
Calendar
Features
Home
Donate
From the Open-Publishing Calendar
From the Open-Publishing Newswire
Indybay Feature
Publish to Newswire
Add an Event
Related Categories: California | Central Valley | U.S. | Environment & Forest Defense | Government & Elections | Labor & Workers
Westlands Hoards Surplus Water While Farmworkers Suffer
by Dan Bacher
Wednesday Aug 19th, 2009 9:12 AM
The California Sportfishing Protection Alliance (CSPA) today called for an investigation into the hoarding of surplus water by the Westlands Water District while farmworkers on the west side of the San Joaquin Valley are struggling to pay their bills and put food on their tables.

Photo: Governor Arnold Schwarzenegger speaks at a rally pushing for a peripheral canal and more dams sponsored by the Latino Water Coalition, a front for Westlands and other corporate agribusiness interests, as the Legislature held a hearing on a package of water bills Tuesday, August 18. 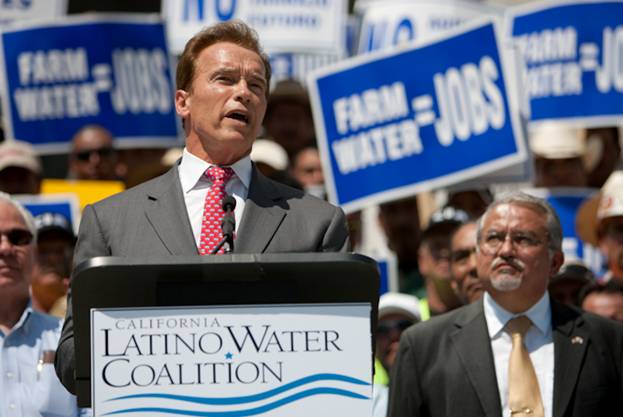 CSPA demands investigation into water hoarding by Westlands and others

Over the past several months, the mainstream media and right wing demagogues such as Sean Hannity have reported "heart rendering" stories about the Westlands Water District having to fallow fields, putting farmworkers out of work and placing farms in jeopardy because of a lack of water supposedly caused by pumping restrictions protecting Delta smelt and Sacramento River Chinook salmon. The movement by a broad coalition of commercial fishermen, recreational fishermen, Delta family farmers, California Indian Tribes and environmental justice advocates to restore the Delta and its collapsing fish populations has been falsely cast by Westlands and San Joaquin Valley agribusiness interests as favoring "fish over people."

Today the California Sportfishing Protection Alliance District (CSPA) countered the lies behind this cynical astroturfing campaign by revealing that the district has been "squirreling away" surplus water it can't use. CSPA has discovered a Westlands' information bulletin dated 23 July 2009 revealing that the giant irrigation district, considered the "Darth Vader" of California water politics by fish restoration advocates, has been hiding considerable carryover storage from last year and is adding even more this year. The group is calling for an investigation into Westlands' surplus water and possible surplus water hidden away by other water districts.

“The idea that Westlands Water District has been hoarding surplus water it can't use while farm workers have been paid to hold vocal protests around the Central Valley accusing Congressman George Miller and federal agencies of starving farmers in order to protect Delta smelt is outrageous," said Bill Jennings, CSPA executive director. “Perhaps Congressmen Devin Nunes and Dennis Cardoza can use their influence to persuade Westlands to share some of their stored water wealth to benefit those less fortunate. Clearly an investigation is needed to see who else might be hoarding surplus water.”

At the end of 2008, Westlands had some 233,998 acre-feet (AF) of water stored in other facilities that it didn't need, according to Jennings. Some 93,700 AF of that stored water was used through June 2009. However, the export pumping restrictions caused by the Delta Smelt Biological Opinion ended 30 June and the State and Federal Projects have ramped up pumping.

Westlands has made firm commitments to acquire 141,522 AF of supplemental water and is requesting additional supplies. "Consequently, Westlands staff projects that the District will end the water year with approximately 275,000 AF of water it is unable to use," Jennings disclosed.

The disclosure of the hoarding of water by Westlands occurs as the district and its front group, the Latino Water Coalition, have been campaigning to give a "human face" to corporate agribusiness by busing hundreds of farmworkers to "rallies" and "marches" in Fresno, Sacramento and Concord demanding increased pumping of water from the Delta. However, no legitimate farmworker organizations are supporting these efforts, organized by the public relations firm Burson-Marsteller, notorious for campaigns to cast a "democratic" image to dictatorships around the world for decades and for numerous corporate greenwashing campaigns (http://www.lloydgcarter.com/content/090629251_the-pr-firm-from-hell).

Paul Rodriguez, a comedian and grower who frequently appears at rallies and marches with Governor Arnold Schwarzengger in support of increasing water exports out of the Sacramento-San Joaquin Delta in total disregard for Delta farmers, farmworkers, recreational fishing businesss and commercial fishermen that depend upon a healthy Delta for their livelihoods, is the chair of the Latino Water Coalition. The coalition includes three co-chairs - Orange Cove Mayor Victor P. Lopez, Ruben Guerra of the Latin Business Association and Tony Estremera, a director of the Santa Clara Valley Water District (http://www.lloydgcarter.com/content/090730277_thirsty-down-in-nobama-county).

Arturo Rodriguez, president of the United Farm Workers of America, the 27,000-member union founded by Cesar Chavez, blasted the Latino Water Coalition's so-called "March for Water" this April for being an event organized by corporate agribusiness, completely stripping away the coalition's claims that it was lobbying on behalf of farmworkers.

"In reality, this is not a farm worker march,'' Rodriguez told the New Work Times on April 17. ''This is a farmer march orchestrated and financed by growers.''

Ironically, the corporate farmers claiming to stand up for their workers against "radical environmentalists" represent the same San Joaquin agribusiness interests that have ruthlessly exploited farmworkers, crushed their right to organize and denied them their right to clean drinking water in the fields for decade after decade. Last year alone 6 farmworkers died due to heat exposure in unsafe working conditions imposed upon them by growers who care nothing about the health of their workers.

Today's disclosure of the cynical hoarding of water by Westlands occurs as Governor Arnold Schwarzenegger, Senator Diane Feinstein and California Legislators, pressured by corporate agribusiness, are pushing for the construction of a peripheral canal to increase water exports to Westlands and southern California. A coalition of fishing groups, Delta family farmers, Indian Tribes and principled environmentalists is fighting the canal, an enormously costly government boondoggle that would result in pushing Central Valley salmon, Delta smelt, longfin smelt, striped bass, green sturgeon and other California Delta fish populations over the abyss of extinction.

Yesterday the California Legislature held a joint hearing of the Assembly Parks and Wildlife and Senate Resources and Water Committees to review a controversial package of five water bills that Jennings describes as a "road map" to the construction of the peripheral canal as Schwarzengger, Westlands growers and the Latino Water Coalition held a rally pushing for a peripheral canal and more dams at the capitol. Canal opponents, including Barbara Barrigan-Parrilla, campaign director of Restore the Delta, Mark Franco, headman of the Winnemem Wintu Tribe, and Zeke Grader, executive director of the Pacific Coast Federation of Fishermen's Associations, and others at the hearing spoke movingly against the mad rush by the Legislature to push through a package that would result in the destruction of the Delta estuary and its fish.

"The peripheral canal is a big, stupid idea that doesn’t make any sense from a tribal environmental perspective,” Franco said during a rally at the Capitol on July 7. “Building a canal to save the Delta is like a doctor inserting an arterial bypass from your shoulder to your hand– it will cause your elbow to die just like taking water out of the Delta through a peripheral canal will cause the Delta to die.”

During a recent town hall meeting in Fresno featuring Interior Secretary Ken Salazar, the UFW's Arturo Rodriguez was the only member of the meeting panel who didn’t call for the construction of the peripheral canal and more dams or overturning the biological opinions under the Endangered Species Act. In an interview with me, Rodriguez pointed out the contradiction between agribusiness asking for new water infrastructure when farmworkers are denied clean drinking water in the fields.

“We have no thoughts on the peripheral canal or dams at this time,” Rodriguez said. “We are looking at the plans and proposals to ensure that what is done takes into account the needs of farmworkers, including making sure that farmworkers have sufficient water to drink in the fields. This is about more than just ensuring water for agriculture – we want to sure that workers have good jobs with good wages and access to representation.”

Ironically, when Salazar randomly selected comment cards from the farmworkers to speak at the microphone before the crowd, not one of the workers themselves complained about unemployment. Their concerns were the same as those voiced by Rodriguez - the urgent need for clean drinking water in the fields, improved wages and working conditions and access to union representation. While the growers bemoaned the "loss" of farmworker jobs due to the favoring of "fish versus people," not one of the workers themselves brought this issue up!

The Westlands bulletin also points out that the Banks pumping plant of the State Water Project in the South Delta has been pumping about 1,000 AF of Central Valley Project daily. "Of course use of the 'Joint Point of Diversion' (JPOD) is illegal and violates D-1641, the State Water Resource Control Board's (State Board) order implementing the Bay-Delta Plan. D-1641 explicitly prohibits use of JPOD when south Delta salinity standards are being violated," noted Jennings.

Presently the running 30-day average for electrical conductivity, the measure of salinity, at Old River near Tracy is 1.02 umhos/cm. The water quality standard for this period is 0.7 umhos/cm to protect Delta agriculture. "South Delta salinity standards have been continually violated the last seven months, imperiling Delta fish populations and Delta farms," Jennings stated.

Jennings said the U.S. Bureau of Reclamation (USBR) and California Department of Water Resources (DWR) have been ignoring the Cease & Deist Order issued by the State Board in 2006 for violation of south Delta salinity standards. Recently, they requested an extension of the compliance schedule for that Cease & Deist Order beyond the 1 July 2009 deadline.

CSPA was a party in the June 2009 State Board evidentiary hearing regarding the DWR/USBR request. Even though the State Board declared in 2006 they would not again extend the compliance schedule, they are expected to shortly issue a decision extending the schedule and excusing past violations. CSPA is prepared to sue over the Board's continued refusal to enforce the Cease & Desist Order. However, the prohibition against using JPOD while standards are violated was neither raised nor discussed in that hearing.

"Earlier this year, the State Board held hearings to consider a relaxation of Delta outflow standards because they were being violated," Jennings stated. "While April rains eliminated the need for relaxed standards, the Board refused to penalize the USBR and DWR for violating existing standards. In June, the USBR acknowledged that Vernalis flows were only about 59% of required flow. Again, the State Board took no action. Water quality standards in the southern Delta have been consistently exceeded since last December."

Jennings observed that, “the State Board continues to look the other way as virtually all of the standards protecting the Delta and its collapsing fisheries are ignored and DWR and USBR violate the law in order to supply Westlands with water they can't use.”

"CSPA remains concerned about the plight of unemployed farm workers, even as we note that data from the California Economic Development Department and annual reports from County Agricultural Commissioners reveal that both farm labor employment and the value of agricultural production has increased in the seven south-of-Delta counties over the course of the drought," emphasized Jennings.

I applaud Jennings and the California Sportfishing Protection Alliance for exposing Westlands' hoarding of water while corporate agribusiness and the Latino Water Coalition engage in a false and misleading campaign portraying themselves as the "voice" of the "poor farmworker" while they clearly care nothing about farmworkers nor the thousands of people in the recreational and commercial fishing industries that are now unemployed, due to the collapse of Central Valley salmon and Delta fish populations spurred by increasing water exports from the Delta in recent years.

For more information and to read the Westlands report that Jennings based his analysis on, go to http://www.calsport.org/8-19-09.htm.