Add an Event
Newswire
Calendar
Features
Home
Donate
From the Open-Publishing Calendar
From the Open-Publishing Newswire
Indybay Feature
Publish to Newswire
Add an Event
Related Categories: California | Central Valley | East Bay | Environment & Forest Defense
Million Boat Float Will Arrive Before Delta Bill Hearing
by Dan Bacher
Wednesday Aug 12th, 2009 9:48 AM
Boaters and their allies will converge on Sacramento on August 16 and 17 to defend the California Delta and to stop the mad rush by Governor Arnold Schwarzenegger and Legislators to build a peripheral canal.

Photo: Delta farmers from North Delta CARES joined a big rally at the State Capitol against the peripheral canal on July 7. 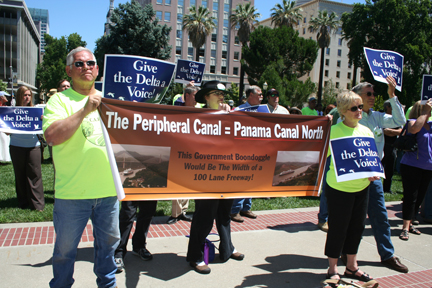 On the day before the California Legislature will hold an informational hearing on a package of water bills that provide a road map to the construction of the peripheral canal, boaters from throughout the Delta will converge on Sacramento in the first-ever Million Boat Float.

The massive two-day flotilla from August 16-17 is being organized to show that boaters and their allies are united in the defense of the Sacramento-San Joaquin Delta against plans by the Governor and Legislators to build the peripheral canal and destroy the largest estuary on the West Coast of the Americas. The proposed canal would approximate the Panama Canal in width and length.

The details on the historic event are now being finalized. The event will start with a float up the Sacramento River from Antioch on Sunday, August 17, at 8 a.m. Yachts and small boats will join the fleet from different staging points as it moves up the river. Several commercial salmon boats may join in the protest if enough donations can be collected to cover fuel costs.

Once in Sacramento, a riverside rally is planned at the Delta King in Old Sacramento at 7:00 pm. Sunday, according to Bruce Connelley, the organizer of the event.

A press conference featuring Delta advocates is also scheduled on Sunday at 1 p.m. at the Robert Matsui Waterfront Park on 219 Jibboom Street in Sacramento.

The activities will continue Monday with an around the Capitol parade of trailer boats starting at 9 am. A rally with legislative and organizational speakers will top off the events at 11:00 am on the West Steps of the State Capitol. The event is drawing national media attention including the staff of "60 Minutes."

The event is sponsored by the Sportsmen Club of Antioch, Restore the Delta, California Sportfishing Protection Alliance, Organic Sacramento, North Delta Cares, California Striped Bass Association, Californians Against the Canal and many other organizations.

“Restore the Delta is supporting the float because it is a wonderful opportunity to show how out of sync the Legislature is with the needs of the Delta fishing and boating communities,” said Barbara Barrigan-Parrilla, campaign director of Restore the Delta.

“The Million Boat Float is a delivering a critical message in light of what corporate interests are doing to our state’s natural resources, including the destruction of the imperiled fisheries of the California Delta and Central Valley,” said John Beuttler, conservation director of the California Sportfishing Protection Alliance. “The sportfishing public is finally getting the message that unless they stand up and oppose corporate greed, they will lose their fisheries and the state’s public trust resources.”

California Senators and Assemblymembers are now pushing a deceptive water bill package through the Legislature that will enable Governor Arnold Schwarzenegger to build his peripheral canal, an environmentally destructive and obscenely expensive project that will approximate the Panana Canal in length and width.

SB 12, a bill sponsored by Senator Joe Simitian (D-Palo Alto), will set up a Delta Stewardship Council consisting of seven members - four appointed by the Governor and one each by the Senate and the Assembly, with the seventh being the chairperson of the Delta Protection Commission, according to Barbara Barrigan-Parrilla, campaign director of Restore the Delta.

How can Simitian allow Schwarzenegger, the worst-ever Governor for fish and the environment in California history, to appoint four out of seven seats of this council when the Governor wants to build the canal as a monument to his gigantic ego?

This is the same Governor that has fast-tracked a corrupt Marine Life Protection Act (MLPA) process that kicks Native Americans, fishermen and seaweed harvesters off their traditional harvesting areas off Stewarts Point and Point Arena while doing absolutely nothing to stop water pollution and the threats posed by offshore oil drilling and wave energy projects. This is the same Governor who continually engages in meaningless "green energy" corporate greenwashing photo opportunities while doing his best to destroy the California Delta and the people that depend on a healthy Delta to survive.

Meanwhile, Assemblyman Jared Huffman (D-San Rafael) is sponsoring AB 39, a bill that includes a section on the Bay Delta Conservation Plan (BDCP), a Schwarzenegger-engineered plan that fishing groups, Delta farmers and many environmental groups have blasted as window dressing for building Arnold's "Big Ditch." The bill also sets the stage for the "Stewardship Council" to implement the BDCP in order to authorize the peripheral canal.

"Thus, despite Assembly Member Huffman's press release last week in which he claims not to be advancing the peripheral canal, it looks like he is allowing a peripheral canal by connecting his bill with Senator Simitian's and giving up the Legislature's authority to allow or disallow a canal," according to Barbara Barrigan Parrilla, campaign director of Restore the Delta.

We must let the public and the Legislators know that we will not allow any legislation that supports a environmentally destructive plan like the BDCP and the peripheral canal to go through the Legislature. I urge you to attend the Million Boat Float from Antioch to Sacramento on August 16-17 and to attend the hearing on the water bills on August 18!

The Senate Natural Resources and Water Committee and the Assembly Water Parks & Wildlife Committee will hold a Joint Hearing on Aug. 18, 9:00 a.m. in Room 4202, titled "2009 Proposed Delta/Water Legislation: Perspectives on the Package.”

For more information about the legislative package and hearing, go to http://www.restorethedelta.org or http://www.calsport.org.

As the bill proceeds through the Legislature, the Department of Water Resources is planning to begin drilling at 16 locations on the Sacramento, Mokelumne and San Joaquin rivers for possible intakes for the canal. In spite of the spurious claims of its proponents that the canal will result in “ecosystem restoration," the canal will only exacerbate the unprecedented collapse of Central Valley salmon, delta smelt, longfin smelt, green sturgeon, Sacramento splittail, American shad, striped bass and other California Delta fish populations.

For updates and more details, go to http://www.millionboatfloat.org or call Bruce Connelley at 925-625-7467.

Schedule of Events for the Million Boat Float:

The Main Event - Rally on the River August 16th:

Note: All times and check points are subject to change. Check back Saturday for confirmation.

As we meet up don't forget to get your Million Boat Float pennant. There will be runners handing them out. The Coast Guard would like to see this. They will be on hand for your safety purpose. Thank you U.S. Coast Guard!

For locations of Marina's and their amenities, go to http://www.deltaboating.com/marinas-cdelta.htm

Check point 1. For those coming from the Bay Area and the West Delta, meet up at Check point 1, between buoys 1 and 2 at Broad Slough at 9:00AM.

Check point 2. For those coming from the South & Central Delta, we will meet you at the Rio Vista Bridge at 10:00AM.

Check point 3. For those in the North Delta, hang tight, we'll get there. We will have a pause in Walnut Grove. Approx. Time 12:00PM.

For the Sacramento area folks and northward, relax, we'll get there. While you're waiting we will be having a press conference at 1:00PM at Matsui Waterfront Park. We need all the boats available at that time. Don't forget to get your Million Boat Float pennant. There will be runners handing them out. They'll have a large banner on their boat so it will be easy to spot them.

Communications channel will be Channel 19A on your VHF. If you don't have a radio, stay close to someone that does. Safety is the most important thing here!

There is a possibility that a tanker carrying Anhydrous Ammonia will be going up river. It will have an armed escort. Boaters must stay 100 yards from the tanker.

At 7:00PM we will have a pre-rally at the The Delta King in Old Sacramento.

FYI: The Delta King is offering special room rates at $99 for the night of the 16th if any one wants to stay ashore that night. Mention the Million Boat Float.

9:00 -10:00AM Hook up your wagons and circle the Rotunda then Rally on the west steps of the Capitol at 11:00AM. If you have a tailored boat, tractor or what ever you identify by, bring it on! Staging area will be in front of Raley Field in Old Sacramento and we will have shuttles going from there to the Capitol.

SACRAMENTO – Supporters of the Million Boat Float will hold a kick-off press conference on Sunday, August 16th as thousands of Delta boaters make their way up the Sacramento River in a mass flotilla to show legislators they are united in defense of the precious Delta.

Delta boaters are coming into Sacramento to express their concerns over a legislative water package (SB 229-Pavley; SB 12-Simitian; AB 39-Huffman; SB 458-Wolk) scheduled to be heard in Legislative committee hearings on Tuesday, August 18th. The package includes several contentious water issues including the governance structure of the Bay-Delta region, water storage and provides the framework for an updated version of the multi-billion dollar Peripheral Canal, which was overwhelmingly rejected by California voters in 1982.

The Million Boat Float will take place throughout Sunday, August 16th on the Sacramento River and culminate with a Rally on the West Steps of the Capitol at 11:00 am on Monday, August 17th.

Participants will express the Delta’s need for a voice in these negotiations, the complexity of this important issue, and the fact that this proposal will cost taxpayers billions of dollars while providing the State with no new water.

For more information, visit http://millionboatfloat.org. For information on how to participate in the Million Boat Float, contact float coordinator Bruce Connelley at 925-625-7467.