Six-minute QT movie. 26MB.
Copy the code below to embed this movie into a web page:
Download Video (26.3MB) | Embed Video
I want to stay in Canada, with my family, because the Iraq War is immoral, illegal and I couldn’t in good conscience go back. The amount of support I’m getting from Canadians is amazing. The parents of my kids’ friends, MPs and even strangers on the street keep telling me that they can’t believe the votes in Parliament aren’t being respected.
--Kimberly Rivera, Iraq War resister


Kimberly Rivera is the first outspoken female Iraq War resister to publicly and legally seek refuge in Canada. Kimberly, along with her partner Mario, son Christian (7 years old) and daughter Rebecca (4 years old), fled to Canada in January 2007 when Kimberly refused redeployment. In late November 2008 Kimberly gave birth to her Canadian daughter Katie (8 months old). She served in Iraq in 2006 and experienced, firsthand, the reality of this ongoing illegal war and occupation.

The conservative Harper government has been trying to deport Kimberly for months, defying Canada’s longstanding tradition of providing sanctuary to U.S. war resisters. On July 8th, Kimberly went to Canadian federal court, to appeal the decision in her Pre-Removal Risk Assessment. If her appeal fails, she will be asked to leave Canada, or be forcibly removed – and delivered into the custody and jurisdiction of the United States Army where Kimberly will face charges that could carry up to a four month sentence in the stockade. So far, three Iraq War resisters have been deported from Canada. 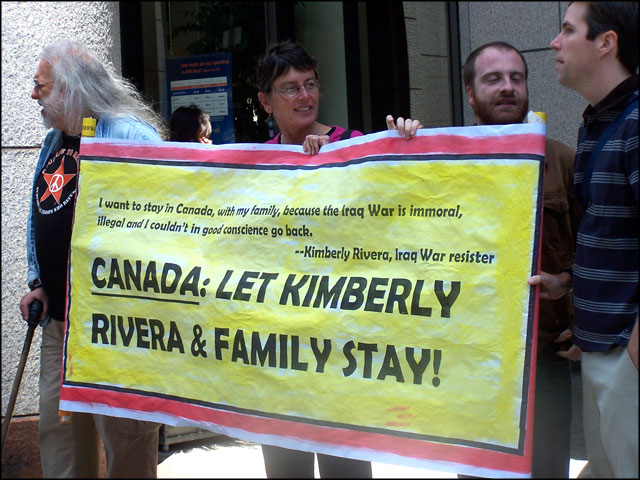 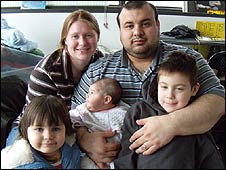 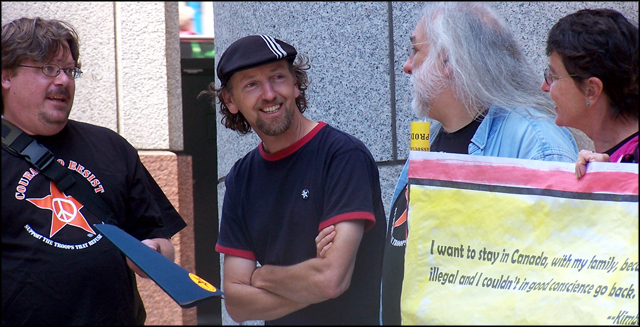 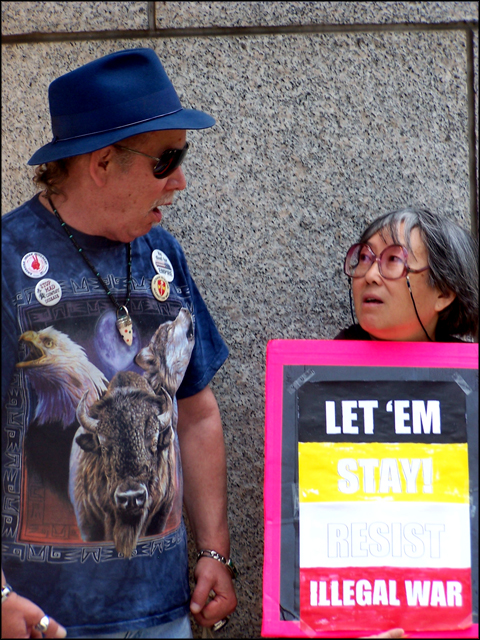 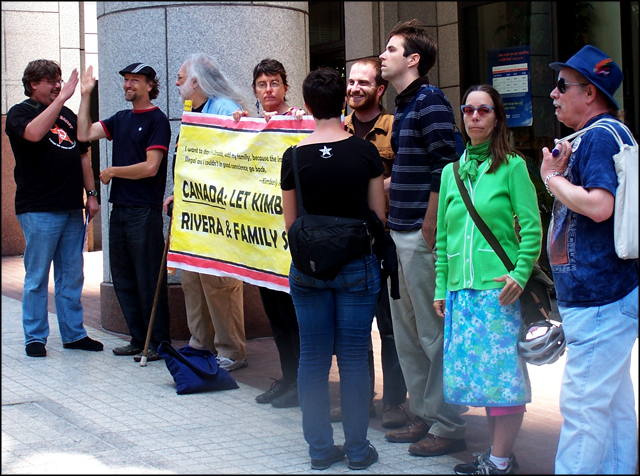 Please act immediately to stop the deportation of Kimberly Rivera, her husband and their three children by implementing the Canadian Parliament’s resolutions to allow U.S. war resisters to stay in Canada.

I am writing from the United States to ask that you abide by the House of Commons resolution—reaffirmed February 12, 2009—to create a program to allow war objectors, including U.S. resisters, to apply for permanent resident status in Canada and to cease all deportation and removal proceedings against them.

The recent flurry of deportation orders to war resisters, including Kimberly Rivera, and the forcing out of Robin Long, Cliff Cornell and Chris Teske, flaunted Canada's longstanding tradition of providing sanctuary to war objectors. Upon their forced return from Canada to the U.S. military, Robin and Cliff were sentenced to 15 and 12 months imprisonment respectively. Future resisters face even stiffer sentences.

When more than 50,000 Americans refused to fight in Vietnam and emigrated to Canada, Prime Minister Pierre Trudeau declared, “[They] have my complete sympathy, and indeed our political approach has been to give them access to Canada. Canada should be a refuge from militarism.”

On June 3, 2008, the House of Commons first voted to uphold this rich tradition by passing a historic resolution to allow war resisters to apply for permanent residence status in Canada and to halt the deportation of conscientious objectors. In addition to this parliamentary motion, according to a recent poll, nearly two of three Canadians also favor allowing U.S. war resisters to stay. Furthermore, many wonderful Canadians have opened their homes and hearts to U.S. war resisters.

I ask that the Canadian government respect the democratic decision of Parliament, the demonstrated opinion of the Canadian citizenry, the view of the United Nations, and millions of Americans by immediately implementing the motion and cease deportation proceedings against Kimberly Rivera, Jeremy Hinzman, Patrick Hart, Dean Walcott and other current and future war resisters.

Rivera was quoted in Canadian press as saying,
"I can only do what the judge says I can do," Rivera said after court. "But I shouldn't have to destroy my family for deciding not to destroy somebody else's family."


GI Who Fled Fights Canadian Deportation
July 10, 2009
Associated Press
TORONTO - The first woman soldier to flee the U.S. military for Canada to avoid the Iraq war on Wednesday appealed the findings of a report that led to her deportation order.

Lawyers for Kimberly Rivera argued a Ministry of Citizenship and Immigration report did not adequately measure the potential risks the war resister could face if she were returned to the U.S. before a Canadian court ordered her to be deported earlier this year.

Rivera's lawyer, Alyssa Manning, argued in Canada's federal court that her client would more likely face a court martial and jail time instead of an administrative discharge because of her political opposition to the war. The report, Manning said, failed to account for this risk of "differential prosecution."

Manning also said the December 2007 report contained sections that were copied "word for word" from assessments carried out on two other war deserters four months earlier, she said.

"It's almost that the conclusion was reached before the evidence was even looked at," Manning said outside court.

The 27-year-old, a private first class in the Army based at Fort Carson, Colorado, served in Iraq in 2006. She said became disillusioned with the mission, and in February 2007, while on a two-week leave in the U.S., she crossed the border into Canada after she was ordered to serve another tour there.

She lives in Toronto with her husband and three children, the youngest of which was born in Canada.

In her arguments, Manning cited cases of a number of U.S. war resisters, including Robin Long, the first resister to be successfully deported from Canada.

Long was given a dishonorable discharge in 2008 and sentenced to 15 months in a military prison after pleading guilty to charges of desertion.

Manning told court that 94 percent of all army deserters are given administrative discharges, but not those who air their beliefs in public.

"People who speak out about their political opinions get prosecuted," she said.

Ministry of Citizenship and Immigration lawyer Stephen Gold told the court that the conclusions in Rivera's risk assessment were "perfectly reasonable." The report fully considered whether Rivera would be at greater risk if she were returned to the U.S., Gold said.

Manning said that unless the court orders a new risk assessment, Rivera will probably be out of options.

"There are very limited avenues," she said. "I would say that today is essentially the last chance."

Rivera said even if she is deported and court-martialed, her opposition to the war will continue.

"It doesn't matter whether I get to stay in Canada or I have to leave Canada," she said. "I'll be the same as I am now."

It's not known when the court will deliver its final decision.

The lower house of Canada's Parliament passed a nonbinding motion in June urging that U.S. military deserters be allowed to stay in Canada, but the Conservative Party government ignored the vote.