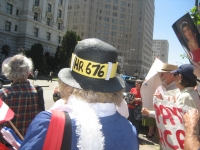 Health and Human Services Secretary Kathleen Sebelius was guest speaker at Nancy Pelosi's $500-per-plate “Ultimate Women’s Power Lunch" on June 22, prompting about 150 demonstrators to gather in front of the Fairmont Hotel where the Democratic fundraiser was held. Sebelius said earlier this month that dismantling private health coverage was "a bad direction to go."

Sebelius' comments, plus Pelosi's lack of support for a Single Payer health care plan, drew nurses doctors and other health care advocates to the front entrance of the hotel. Demonstrators carried signs calling for support of a bill for national health care currently in Congress, HR 676, and insisting that Single Payer advocates be allowed a place in the national debates on health care reform. Dr. John Shearer spoke to the assembled group, and called out to the politicians as they entered the hotel, "Secretary Sebelius, can you hear us?" He said that health care is a moral issue.

The vociferous demonstration was punctuated by a skit and songs about the benefits of a Single Payer plan courtesy of the Raging Grannies, who took to a bullhorn and led the chant "Nancy Nancy you can't hide--Insurers are on your side" when the House Speaker was spotted in front of the hotel. Also attending the fundraiser was Rep. Anna Eshoo, another congressperson who has shown a lack of concern for her constituents' needs for comprehensive health care reform in the form of a single payer plan.