On the same day that Schwarzenegger viewed the final production model of the E-fuel 100 MicroFueler in yet one more of his corporate greenwashing photo opportunities, the Governor attacked the court-ordered biological opinion to protect salmon, sturgeon and killer whales. The MicroFueler, a portable micro-refinery fuel system for consumer use,is a household appliance-sized unit that creates ethanol fuel (E-Fuel100) from organic waste. The photo was taken at the State Capitol in Sacramento by the Governor's staff. 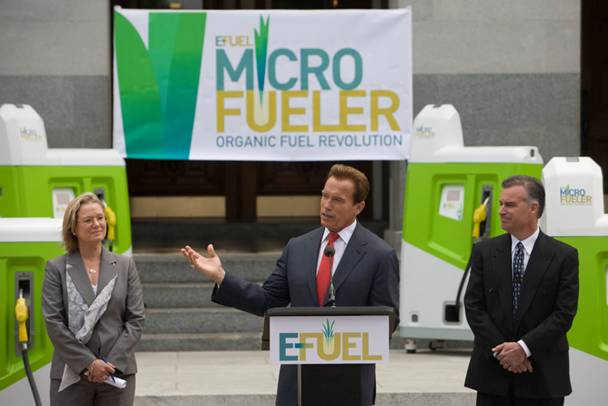 If anybody has any lingering doubts about whether Arnold Schwarzenegger is the "Green Governor" or the "Fish Terminator," he completely stripped away his green facade when today he blasted the new federal plan to protect Central Valley Chinook salmon and other imperiled species just after it was released.

In the court-ordered biological opinion released this morning, scientists from the National Marine Fisheries Service (NMFS) of NOAA concluded that current water pumping operations in the Federal Central Valley Project and the California State Water Project should be changed to ensure survival of winter and spring-run Chinook salmon, Central Valley steelhead, the southern population of North American green sturgeon and Southern Resident killer whales, which rely on Chinook salmon runs for food.

Changing water operations will impact an estimated five to seven percent of the available annual water on average moved by the federal and state pumps, or about 330,000 acre feet per year, according to Maria Rea, the NMFS Area Supervisor.

Schwarzenegger, who continues to campaign for an enormously expensive peripheral canal and more dams while the state is in its worst-ever financial crisis since the Great Depression, tried to falsely portray the issue as one of "fish versus people," ignoring the thousands and thousands of commercial and recreational fishing businesses and coastal communities that have been devastated by fishery collapses caused by massive exports of water to corporate agribusiness and the operation of Central Valley dams.

“This federal biological opinion puts fish above the needs of millions of Californians and the health and security of the world’s eighth largest economy," claimed Schwarzenegger. "The piling on of one federal court decision after another in a species-by-species approach is killing our economy and undermining the integrity of the Endangered Species Act."

Schwarzenegger said he will be asking for a meeting with Secretary Salazar and Secretary Locke "to discuss our concerns with these biological opinions" and said his Administration "will be pursuing every possible avenue to reconcile the harmful effects of these decisions."

Of course, Schwarzenegger neglected to mention that two independent peer review panels were conducted to ensure the biological opinion is solidly grounded in the best available science. CalFed Independent Science Board and the Center for Independent Experts peer reviewed the document.

Department of Fish and Game (DFG) Director Donald Koch was more diplomatic in his assessment of the new biological opinion, but nonetheless used the document's release as an opportunity to push the controversial Bay Delta Conservation Plan that includes a peripheral canal and more surface storage.

“We appreciate the need for the National Marine Fisheries Service’s Biological Opinion for the Operations, Criteria, and Plan (OCAP) for the Central Valley Project and the California State Water Project," said Koch. "We will continue to work with interested federal and state agencies on a durable, long term, ecosystem-based approach to conservation of species in the Bay-Delta. We believe the Bay Delta Conservation Plan is that approach.”

“With today's announcement, the Obama administration has set a science-based course toward recovering the populations of wild salmon and steelhead that are so critical to California's economy and environment,” said Rep. George Miller (D-Martinez), an expert in Congress on California water policy. “After years of costly litigation and negligence and political tampering by the Bush Administration, this is an important step towards the recovery of California’s fisheries and the environmental health of the Bay-Delta. It is refreshing to see water management decisions that are based on science, not on the whims of tainted political appointees like Julie MacDonald.”

“This is an important step for restoring California’s fisheries,” said Congressman Mike Thompson (D- Napa Valley). “Salmon and steelhead are a vital part of our ecosystem and contribute to our state’s economy up and down the coast. Today’s report is a breath of fresh air for Californians who have grown used to water policies based on politics rather than on science. Moving forward, we need to use this as a first step towards building a water policy in California that is based on science and includes all stakeholders at the table.”

“I am glad to see that the Administration is taking critical action based on sound science,” said Representative Doris Matsui (D-Sacramento). “Today’s opinion will go a long way towards preservation of not only a number of threatened species, but also will play a role in the protection of the entire watershed on which so many Californians rely. It is key that as the federal government moves forward to protect and restore California’s fisheries, water supply and the future of the Delta, that decisions are based on sound science.”

Representatives of fishing organizations were cautiously optimistic about the decision, looking to it as a good first step toward the recovery of endangered salmon, green sturgeon and killer whales.

"The BO is a long overdue but welcome initial step in protecting species hovering on the brink of extinction," observed Bill Jennings, Executive Director of the California Sportfishing Protection Alliance (CSPA) (http://www.calsport.org). "However, it is only a first step. It is not a recovery plan that will restore seriously degraded fisheries; much more will be required.”

Jennings added that "virtually all of the new requirements are measures that environmentalists, fishermen and resources agencies have advocated in numerous proceedings over the last 25 years but were consistently ignored or rejected by the State Water Board, DWR and the Bureau.”

These include measures to eliminate lethal temperature below rim dams, the problems at Red Bluff Diversion Dam and the Cross-Channel Gates, violation of water quality standards, inadequate flows in both the San Joaquin and Sacramento River systems, excessive predation caused by project facilities and the enormous damage created by reversed flows in Old and Middle Rivers.

He also strongly criticized the Governor for denouncing the federal decision. "Our Governor is simply seeking to justify the embezzlement of water from public trust resources - water belonging to all Californians and senior water rights holders - the embezzlement of which has brought California's fisheries and aquatic ecosystems to the brink of destruction," said Jennings. "All of this is to benefit the few who knowingly planted permanent crops based upon an interruptible water supply that would not be fullly available during droughts - which occur a third of the time in California."

“The BO only evaluates water contributions from the state and federal projects but acknowledges the significant need for contributions from other water users," CSPA attorney Mike Jackson said. "Without this additional water, steelhead and salmon will not survive until 2030. The BO notes that the State Water Board has the authority to require water users to contribute to the restoration of the fishery and urges that the Board take prompt action.”

CSPA urges the State Water Resources Board to take "prompt action" in implementing the BO's recommendations. )It will be interesting to see how the Board will respond to the opinion after the Governor harshly criticized it.)

Mike Hudson, commercial fisherman and executive director of the SalmonAid Foundation (http://www.salmonaid.org), said he is " cautiously optimistic that today is the day that may start meaningful restoration of this fantastic fish."

"We have had all the laws on the books for decades now, the Clean Water Act, the Endangered Species Act, and others," stated Hudson. "Sometimes it’s not that the rules are not in place, but the lack of commitment to enforce them. It is not too late to bring our salmon back."

“These changes are exactly what we have been looking for," said Dick Pool, administrator of the Water for Fish advocacy organization (http://www.water4fish.org). "We have been operating on an environmental disaster course for salmon and these actions are the beginning of the turnaround.”

Donald R. Glaser , Mid-Pacific Regional Director for the Bureau of Reclamation, said the agency has "provisionally accepted" NOAA’s recommended changes to its water pumping operations. "We will implement its near-term elements as we carefully evaluate the overall opinion," he stated, noting that he and his staff hasn't had a chance yet to review the 800-plus page document yet, since it was just released today.

As part of the final opinion, NOAA has provided a number of ways the Bureau can operate the water system to benefit the species, including increasing the cold water storage and flow rates. Such methods will enhance egg incubation and juvenile fish rearing, as well as improve the spawning habitat and the downstream migration of juvenile fish.

In addition, the opinion calls for the bureau to develop a genetics management plan and an acoustic tagging program to evaluate the effectiveness of the actions.

The opinion also calls for pilot passage programs at Folsom and Shasta reservoirs to reintroduce fish to historic habitat. The goal is to reintroduce the winter run Chinook salmon to the McCloud River and Upper Sacramento River above Shasta Dam and steelhead to the American River above Nimbus and Folsom dams.

She declined to give any specific options for how the fish would be reintroduced above the dams, saying that they would be chosen by a steering committee of experts from the fishery and water agencies. After the pilot program is conducted, the committee would decide if long term restoration to the tributaries would be feasible.

Rea also noted that the American Recovery and Reinvestment Act will mitigate some costs resulting from the opinion’s recommended actions. The Department of the Interior identified $109 million to construct a Red Bluff Pumping Plant that will allow the old Red Bluff Diversion Dam to be operated in a "gates out" position to allow salmon and green sturgeon unimpeded passage. The act also contains $26 million to restore Battle Creek, a salmon tributary to the Sacramento River.

For a copy of the final biological opinion and alternative actions, go to http://swr.nmfs.noaa.gov/ocap.htm.