Add an Event
Newswire
Calendar
Features
Home
Donate
From the Open-Publishing Calendar
From the Open-Publishing Newswire
Indybay Feature
Publish to Newswire
Add an Event
Related Categories: California | Central Valley | North Coast | U.S. | Environment & Forest Defense
Another Year of No Salmon Fishing off California Coast
by Dan Bacher
Friday Mar 13th, 2009 4:28 PM
Commercial and recreational salmon fishermen face another year of fishing closures in ocean waters off California and most of Oregon, due to the collapse of the Sacramento River Fall Chinook salmon population. 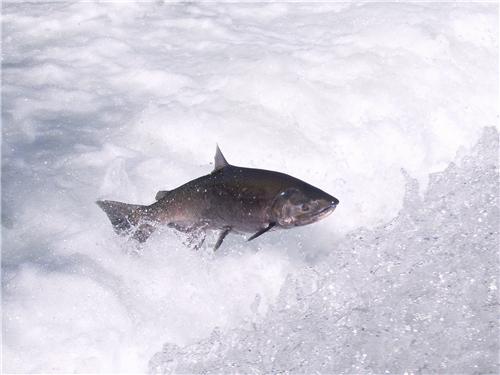 Another Year of No Salmon Fishing off California Coast

Commercial and recreational salmon fishermen face another year of fishing closures in ocean waters off California and most of Oregon, due to the collapse of the Central Valley Fall Chinook salmon population.

The Pacific Fishery Management Council (PFMC), a federal body that sets fishing regulations for ocean fisheries, Thursday adopted three public review options for the 2009 salmon season off the West Coast. The Council will consult with scientists, hear public comment, and revise preliminary decisions until it chooses a final option at its meeting during the week of April 5 in Millbrae, California.

While fisheries in the north improved as Chinook and coho stocks rebounded, fisheries in the south will be closed or very limited because of the dramatic decline of Sacramento River Chinooks.

“California ocean sport fishing options range from entirely closed to 10 open days in August and September in the Eureka/Crescent City area,” according to Dr. Donald McIsaac, executive director of the PMFC. “Oregon ocean recreational options include mark-selective coho fishing seasons starting in June or July and running into September. One of those options includes a three fish daily bag limit to take advantage of a large abundance of hatchery coho.”

“Commercial ocean salmon fishing will be closed in California in 2009,” said McIsaac. “Oregon commercial season options in the Brookings area range from closed to a season with a 1,000 Chinook quota in September. Season options in the Tillamook, Newport, and Coos Bay area range from closed to open for Chinook and coho in September, with quotas on coho catch.”

In 2008, an unprecedented low return of 66,264 adult Fall Chinooks on the Sacramento River led to the closure of both recreational and salmon fishing off the California and Oregon coast for the first time in 150 years. While this year’s returns are better than last year’s, the season options are still limited.

Even without any fishing, only 122,196 fish are expected to return to the Sacramento River this year. The minimum conservation goal for the once robust run is 122,000-180,000 spawning adult salmon. The Sacramento River Fall Chinook is the driver of West Coast salmon fisheries.

Recreational and commercial fishermen support closed and limited salmon seasons this year, due to the precarious state of the fishery. “I would be surprised that anybody who has looked at the Sacramento River returns believes that a season could be sustained, “ said Dick Pool, administrator of water4fish.org. “We’re still crossing our figures on the possibility of having a 2010 season because of the massive trucking program and acclimation of over 23 million hatchery salmon in pens in San Pablo Bay that took place last year. However, without solving the problems that salmon encounter on the Delta and Central Valley rivers, we won’t be able to rebuild the natural stocks.”

A multi-agency task force is expected to report on the causes of the Sacramento salmon decline in April. Although last year officials with the Bush and Schwarzenegger administrations claimed that “ocean conditions” spurred the collapse, a coalition of recreational, commercial fishermen, Indian Tribes, conservationists and independent scientists pointed to increased water exports from the California Delta, declining water quality and other freshwater habitat problems as the key factors in the collapse.

The collapse of salmon fisheries has led to economic devastation to coastal and inland communities dependent upon recreational and commercial salmon fishing. Fish advocates charge that fishing jobs have been sacrificed to provide massive amounts of water to subsidized, junior water rights holders in the Westlands Water District and Kern County that irrigate toxic, drainage impaired land.

“The collapse of salmonid fisheries has led to a corresponding depression in the recreational fishing industry,” said California Sportfishing Protection Alliance (CSPA) Executive Director Bill Jennings. “The number of anglers declined from 2.7 million in 1996 to 1.7 million in 2006."

The economic consequences of last year's closure of the salmon fishing season amounted to $255 million, along with the loss of 2,263 jobs.

“It makes no sense to sacrifice California's historic fishing industry in order to supply subsidized water to grow subsidized non-food crops on impaired desert lands that by design discharge toxic wastes back to Central Valley waterways,” emphasized Jennings. “While farmers now face a drought brought on by Mother Nature, fishermen are facing a disaster brought on by water agency greed.”

The results of a rewritten “biological opinion” by the National Marine Fisheries Services agree largely with Jennings, Pool and other fishery advocates.

The report concludes that increases in freshwater exports out of the California Delta, the operation of Shasta Dam and other inland habitat problems have not only led to the collapse of Central Valley spring run and winter run salmon populations, but also threaten the southern resident killer whale population, now estimated to number less than 90 individuals. The orcas feed heavily upon Sacramento Chinooks and other runs of salmon.

Overall, when the Sacramento River survival of 20% is combined with the Delta survival of 40%, only 8% of the juvenile salmon (smolts) make it to the West Delta.

Scientists and representatives of recreational angling, commercial fishing, tribal and environmental groups spoke about the urgent need to restore salmon fisheries before the California State Assembly’s Committee on Water, Parks & Wildlife, convened by Assemblyman Jared Huffman, at an informational hearing on the salmon crisis Tuesday, March 10 at the State Capitol.

“The fish don’t lie,” said Peter Moyle, PhD, author of a January 2008 report commissioned by California Trout on the status of California’s native salmon, steelhead and trout populations. “The story they tell is that California’s environment is unraveling. Their demise is symptomatic of a much larger water crisis that, unless addressed, will severely impact every Californian.”

"There are a myriad of problems facing salmon, but what has to be done before anything else, and above all else - is restoring water flows in the Delta and our coastal streams," said Zeke Grader of the Pacific Coast Federation of Fishermen's Associations (PCFFA), which represents commercial fishing men and women. "It's critical the state not get lost in the weeds trying to restore salmon; water flow and water quality are at the foundation of rebuilding our salmon fishery. Fish gotta swim."

On a more positive note, the Klamath River Fall Chinook run is forecast to meet the minimum natural spawning goal of 35,000 and the 2009 management objective of 40,700.

Also, Oregon coastal coho had much better returns in 2008 than forecast, with a total of 165,700 natural spawners, according to PFMC data. This was the best return in four years and the fifth best since at least 1970.

Management Process Public hearings to receive input on the options are scheduled for March 30 in Westport, Washington and Coos Bay, Oregon; and for March 31 in Eureka, California.

At its April 5-9 meeting in Millbrae, the Council will narrow these options to a single season recommendation to be forwarded to the National Marine Fisheries Service (NMFS) for their final approval before May 1. All Council meetings are open to the public. For more information, go to: http://www.pcouncil.org