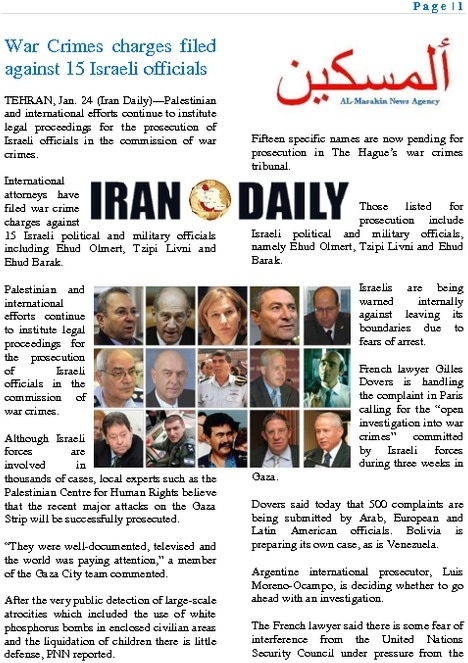 Palestinian and international efforts continue to institute legal proceedings for the prosecution of Israeli officials in the commission of war crimes.

Although Israeli forces are involved in thousands of cases, local experts such as the Palestinian Centre for Human Rights believe that the recent major attacks on the Gaza Strip will be successfully prosecuted.

“They were well-documented, televised and the world was paying attention,” a member of the Gaza City team commented.

After the very public detection of large-scale atrocities which included the use of white phosphorus bombs in enclosed civilian areas and the liquidation of children there is little defense, PNN reported.

Israelis are being warned internally against leaving its boundaries due to fears of arrest.

French lawyer Gilles Dovers is handling the complaint in Paris calling for the “open investigation into war crimes” committed by Israeli forces during three weeks in Gaza.

Dovers said today that 500 complaints are being submitted by Arab, European and Latin American officials. Bolivia is preparing its own case, as is Venezuela.

Argentine international prosecutor, Luis Moreno-Ocampo, is deciding whether to go ahead with an investigation.

Today’s invitation to try at least 15 Israeli officials is being delivered by 30 international lawyers of several nationalities.
In parallel, the intention of a group of French lawyers to file a complaint on behalf of French citizens of Palestinian origin to the French courts against Israeli officials is gaining attention in the cities of Paris and eastern France.

Coordination with other lawyers in Belgium and Spain is underway as similar complaints against the Israeli officials are being made in Brussels and Madrid. Belgium is among the countries who issued charges against Ariel Sharon in the past.

Moroccan lawyers also disclosed on Thursday practical steps toward filing a lawsuit against “the perpetrators of war crimes” in Gaza. Six lawyers are working with the Minister of Justice of Morocco.

Israeli Prime Minister Ehud Olmert has put the justice minister in charge of defending Israel against charges of war crimes during its 22-day Gaza assault, a government source said Friday.

Daniel Friedman will lead an inter-ministerial team to coordinate a legal defense for civilians and the military, the source said.

Ehud Barak, the Defense Minister and architect of the offensive, ordered the army to establish an incrimination team of intelligence and legal experts to examine any evidence that could be used against Israeli officials in law suits. That could possibly include Major-General Yoav Galant, the chief of Israel’s southern command, as well as other senior officers.

According to human rights groups, Israel killed more than 1,400 Palestinians with a third being children and also wounded at least 5500.

UN human rights expert and retired Princeton law professor Richard Falk said on Thursday that there is compelling evidence that Israel violated the laws of war by “conducting a large-scale military operation against an essentially defenseless population.”

“There needs to be an investigation carried out under independent auspices as to whether these grave breaches of the Geneva Conventions should be treated as war crimes,” the professor said, adding that he believes “that there is the prima facie case for reaching that conclusion.”