Add an Event
Newswire
Calendar
Features
Home
Donate
From the Open-Publishing Calendar
From the Open-Publishing Newswire
Indybay Feature
Publish to Newswire
Add an Event
Related Categories: International | Animal Liberation | Environment & Forest Defense
Coral Reefs and Ocean Biodiversity threatened by Climate Change
by Takver - Sydney Indymedia
Friday Jan 2nd, 2009 9:22 PM
Australian marine scientists have issued a warning on the increasing acidity of the world's oceans and its impact on coral reefs, and through the food web, the productivity and biodiversity of oceans. There has been an unprecedented decline in coral growth since 1990 caused by a combination of rising sea surface temperatures and ocean acidification. At the current rate of decline, coral will be unable to grow by 2050, scientists warn. 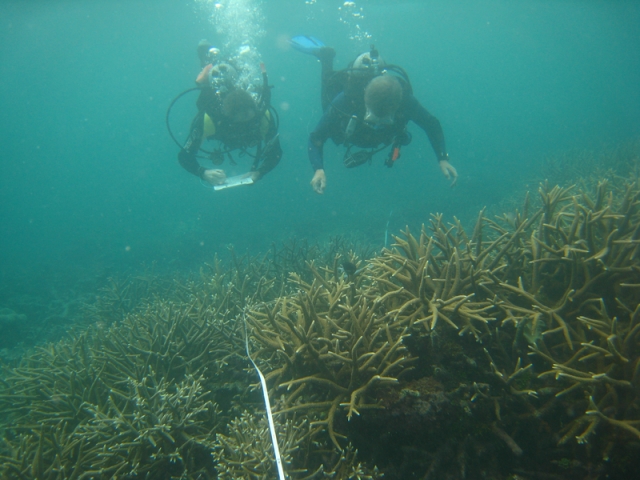 Scientists at the Australian Institute of Marine Science in Townsville claim that coral on Australia's Great Barrier Reef reached a tipping point in 1990 with coral growth having slowed by more than 14 percent since then.

Reef corals create their hard skeletons from dissolved materials in seawater. As human induced climate change has injected growing amounts of carbon dioxide into the atmosphere, the worlds oceans have absorbed carbon dioxide making them more acidic which effectively reduces the ability of marine organisms to form skeletons. This will effect the whole food chain in the ocean.

Dr Glenn De’ath said that the severe and sudden decline in calcification was an unprecedented occurrence in the last 400 years. "The causes of this sharp decline remain unknown, but our study suggests that the combination of increasing temperature stress and ocean acidification may be diminishing the ability of GBR corals to deposit calcium carbonate," he said.

"Prior to about 1990 coral growth was fairly consistent but round about 1990 things have change and we're suggesting this is the tipping point. What's happened basically coral calcification, that's a measure of how corals grow, has decreased by about 14 per cent since then. Now we're experiencing growth which is now consistently declining. We estimate roughly, if this rate continues, which is accelerating, then the coral growth will hit zero round about 2050." Dr Glenn De’ath told Australian Broadcasting Corporation radio.

The scientists, Dr Glenn De’ath, Dr Janice Lough and Dr Katharina Fabriciu, have published their research in the international journal Science. It is the most comprehensive study to date on calcification rates for corals and include rigorous statistical analyses of annual growth bands from 328 Porites corals from 69 reefs across the length and breadth of the Great Barrier Reef, and extending back in time up to 400 years.

"It is cause for extreme concern that such changes are already evident, with the relatively modest climate changes observed to date, in the world’s best protected and managed coral reef ecosystem," said AIMS scientist and co-author Dr Janice Lough.

"Coral skeletons form the backbone of reef ecosystems. Their complexity provides the habitat for the tens of thousands of plant and animal species associated with the reef," co-author Dr Katharina Fabricius said. "Skeleton formation also offsets natural erosion and breakage. Previous laboratory experiments and models have predicted that calcification will decline in response to acidification, but here we have shown for the first time that corals are already affected in their natural environment throughout the GBR," Dr Fabricius said.

According to the scientists, oceanic pH, the measure of acidity of substances, has already dropped by 0.1 and could decrease by 0.4 by the end of this century, due to the oceans absorbing about a third of the extra carbon dioxide (the main greenhouse gas) that humans have put into the atmosphere. If the projected 0.4 decline in pH is correct, this would be "well outside the realms of anything organisms have experienced over hundreds of thousands of years," Dr Lough said. Increased ocean acidity will affect all marine life through food webs leading to precipitous changes in the biodiversity and productivity of the world's oceans, the scientists warn.