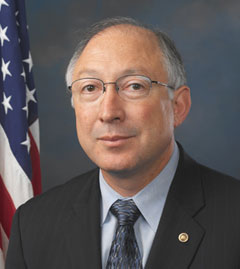 After a couple of weeks of Washington insiders speculating about which people might be selected for two of the nation's key environmental posts, President-Elect Barack Obama today formally announced the nominations of Senator Ken Salazar of Colorado for Secretary of the Interior and former Iowa Governor Tom Vilsack for Secretary of Agriculture.

Just a week ago, Congressmen Mike Thompson (D-CA) and Raul Grijalva (D-AZ) were supposedly on Obama's "short list" for the Secretary of Interior. A broad coalition of national fishing and hunting organizations, conservation groups and the Karuk Tribe was supporting the nomination of Thompson, while a coalition of environmentalists and national Latino organizations was backing Grijalva. As it turned out, neither of the two apparently likely candidates were chosen.

Obama took a shot at the Bush's administration's environmental polices in explaining his reasons for choosing Salazar.

“I want a more proactive Interior Department," the President Elect stated. "I also want an Interior Department that, very frankly, cleans up its act. There have been too many problems and too much -- too much emphasis on big-time lobbyists in Washington and not enough emphasis on what's good for the American people, and that's going to change under Ken Salazar.”

Obama hailed Salazar as a “champion for farmers, ranchers, and rural communities” that will “bring to the Department of Interior an abiding commitment to this land we love.” He also affirmed that "that tribal nations have a voice in this administration" with the appointment of Salazar.

The Sierra Club, which didn't endorse any candidate for the Interior post, praised the nominations. Carl Pope, Executive Director of the Sierra Club, said he was confident that Salazar would promote green energy policies and "undo the damage" of the Bush years.

"The Sierra Club is very pleased with the nomination of Ken Salazar to head the Interior Department," said Carl Pope, Executive Director of the Sierra Club. "As a Westerner and a rancher, he understands the value of our public lands, parks, and wildlife and has been a vocal critic of the Bush Administration's reckless efforts to sell-off our public lands to Big Oil and other special interests. Senator Salazar has been a leader in protecting places like the Roan Plateau and he has stood up against the Bush's administration's dangerous rush to develop oil shale in Colorado and across the West.

"Senator Salazar has also been a leading voice in calling for the development of the West's vast solar, wind, and geothermal resources. He will make sure that we create the good-paying green jobs that will fuel our economic recovery without harming the public lands he will be charged with protecting.

"Senator Salazar will inherit an agency that has suffered from a pervasive rot under the Bush administration due to widespread corruption, simple incompetence, and severe underfunding. We are confident that Senator Salazar will work with President-Elect Obama to undo the damage of the Bush years and chart a course that will allow this vast agency to return to its proud legacy of protecting our last wild places, wildlife, and vast natural resources."

Senator Salazar is currently a member of the Congressional Sportsmen’s Caucus and has been a consistent pro-sportsman vote since he came to Washington, D.C. in 2004. "With this appointment, President-Elect Obama has made the logical choice of an Interior Secretary who understands the sportsmen’s legacy of hunting and conservation on America’s public lands," according to a statement from SCI.

“We are pleased that President-Elect Obama has resisted the pressure from anti-hunting groups to name an anti-hunting extremist to this important post,” said SCI President Merle Shepard. “Senator Salazar’s pro-hunting votes over the past four years in Washington, and his support for access to federal lands for hunting throughout his entire career in Colorado will prove to be invaluable for sportsmen and women during this Administration.”

Shepard continued, “SCI looks forward to working with Senator Salazar in the Obama Administration to make sure the hunter’s voice is heard on every issue that affects hunting, hunters or science-based wildlife management.”

On the other hand, the Tucson-based Center for Biological Diversity strongly opposes Salazar's nomination. "The Department of the Interior desperately needs a strong, forward looking, reform-minded Secretary," said Kieran Suckling, the organization's executive director. "Unfortunately, Ken Salazar is not that man."

Suckling criticized Salazar for endorsing George Bush's selection of Gale Norton as Secretary of Interior, the very woman who initiated and encouraged the scandals that have rocked the Department of Interior. "Virtually all of the misdeeds described in yesterday's Inspector General expose occurred during the tenure of the person Ken Salazar advocated for the position he is now seeking," stated Suckling.

"While Salazar has promoted some good environmental actions and fought against off-road vehicle abuse, his overall record is decidedly mixed, and is especially weak in the arenas most important to the next Secretary of the Interior: protecting scientific integrity, combating global warming, reforming energy development and protecting endangered species," according to Suckling.

The Sierra Club also lauded Vilsack's nomination. "The Sierra Club congratulates Governor Vilsack on his appointment to head the Department of Agriculture," said Carl Pope. "We look forward to working with him in this new role. With a Secretary Vilsack overseeing the National Forest System and the Conservation Reserve Program, we are optimistic that USDA can once again become a responsible steward of wilderness and vital habitat for wildlife.

"Governor Vilsack can play an important role in helping to bring about the clean energy economy in a way that benefits both farmers and rural communities and our environment. The USDA can take the lead in moving us past the corn-based ethanol of today toward the next-generation biofuels of tomorrow. These next-generation biofuels will not just provide farmers with new sources of income and help us break our dangerous dependence on oil, but they will also help President-Elect Obama achieve his ambitious plans to tackle global warming."


Sen. Salazar Accepts Nomination to Lead Interior Department
CHICAGO, IL – Today, United States Senator Ken Salazar made the following statement today after President-elect Obama formally nominated him to serve as the next Secretary of the United States Department of Interior:

“I am humbled and honored to be nominated by President-Elect Barack Obama to serve as Secretary of the Interior.

“My story in America began more than 400 years ago when my ancestors settled the city of Santa Fe, New Mexico. They named it the City of Holy Faith.

“As my family struggled for survival across twelve generations in Colorado and New Mexico, their faith that humanity could achieve the potential given to each human being by our Creator has been the bedrock that has sustained them over those many years.

“Today as I stand here, I see their faith shining brightly on Barack Obama.

“I know Barack Obama as a champion for change, and I am grateful for his confidence in me.

“I look forward to serving as a strong voice in the Administration for the West and the Nation.

“As the Nominee to be Secretary of the Interior, I will do all I can to help reduce America’s dangerous dependence on foreign oil.

“I look forward to working directly with President-Elect Obama as an integral part of his team as we take the moon shot on energy independence.

“That energy imperative will create jobs here in America, protect our national security, and confront the dangers of global warming.

“I look forward to helping build our clean energy economy, modernize our interstate electrical grid, and ensure that we are making wise use of our conventional natural resources, including coal, oil, and natural gas.

“I look forward to protecting our national parks, public lands and open spaces, and America’s farm and ranchlands.

“I look forward to restoring our Nation’s rivers and working to resolve our water supply challenges.

“I look forward to helping to address the challenges faced by our Native American communities across the Nation.

“And I look forward to investing in America’s young people by implementing President-Elect Obama’s vision for youth programs across America.

“I want to thank, first and foremost, my entire family; especially my wife, Hope, and daughters Melinda and Andrea. Without their courage and unwavering support, I would not be here today.

“I want to thank my late father, Henry, and my mother, Emma. As a soldier and a public servant in World War II, they instilled in me the values that enabled me and all of my siblings to achieve the American dream.

“I want to thank my seven brothers and sisters and all of my family because they have always inspired me to reach for the stars.

“I want to thank the five million people of the state of Colorado who gave me the privilege of serving as their chief law enforcement officer as Attorney General and as their United States Senator. I look forward to serving Colorado, the West, and the Nation, in this new capacity. I will work hard to make you proud.

“Finally, I want to thank the Members of the United States Senate for their dedication and friendship. I have been honored and blessed to serve with them, Democrats and Republicans alike.

“And to my wonderful staff in the United States Senate: thank you for your loyalty and dedication to excellence.

“I thank President-Elect Obama and I look forward to serving as a member of his team.”

###
Add Your Comments
LATEST COMMENTS ABOUT THIS ARTICLE
Listed below are the latest comments about this post.
These comments are submitted anonymously by website visitors.