by Isabelle Jenniches (ij [at] stopthespray.org)
Just a few days before the one-year anniversary of the aerial spraying for Light Brown Apple Moth (LBAM) in Santa Cruz, the California Department of Food and Agriculture (CDFA) released two studies about the pesticide applications in Monterey and Santa Cruz counties. While CDFA claims that these reports prove the safety of the eradication program, environmental groups and citizen advocates say that statement is misleading and point out fundamental shortcomings of both reports. Rather, they argue, they reveal another breach of the law by CDFA. 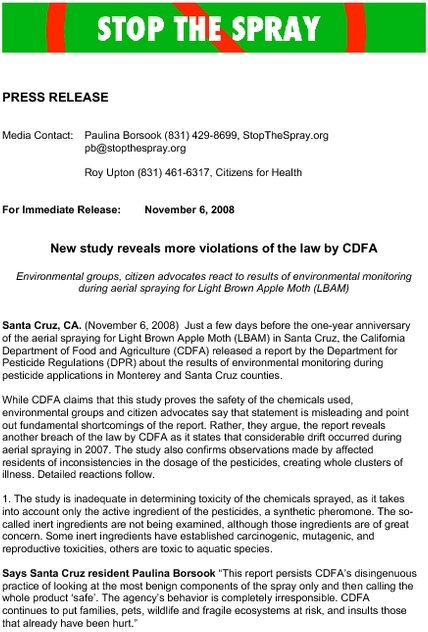 
New study reveals more violations of the law by CDFA


Santa Cruz, CA. (November 6, 2008) Just a few days before the one-year anniversary of the aerial spraying for Light Brown Apple Moth (LBAM) in Santa Cruz, the California Department of Food and Agriculture (CDFA) released a report by the Department for Pesticide Regulations (DPR) about the results of environmental monitoring during pesticide applications in Monterey and Santa Cruz counties.

While CDFA claims that this study proves the safety of the chemicals used, environmental groups and citizen advocates say that statement is misleading and point out fundamental shortcomings of the report. Rather, they argue, the report reveals another breach of the law by CDFA as it states that considerable drift occurred during aerial spraying in 2007. The study also confirms observations made by affected residents of inconsistencies in the dosage of the pesticides, creating whole clusters of illness. Detailed reactions follow.

1. The study is inadequate in determining toxicity of the chemicals sprayed, as it takes into account only the active ingredient of the pesticides, a synthetic pheromone. The so-called inert ingredients are not being examined, although those ingredients are of great concern. Some inert ingredients have established carcinogenic, mutagenic, and reproductive toxicities, others are toxic to aquatic species.

Says Santa Cruz resident Paulina Borsook “This report persists CDFA’s disingenuous practice of looking at the most benign components of the spray only and then calling the whole product ‘safe’. The agency’s behavior is completely irresponsible. CDFA continues to put families, pets, wildlife and fragile ecosystems at risk, and insults those that already have been hurt.”

Quote: “The Check Mate products also contain several inert ingredients, but these were not monitored.” (p. 2)

2. While deficient in determining toxicity of the spray, the new study conducted by DPR, reveals evidence of further abuses of the law by CDFA. The report states that pesticide drift was measured as far as 3.3 miles outside of the spray zone. This is a clear violation of section 12972 in the California Agriculture Code: “The use of any pesticide by any person shall be in such a manner as to prevent substantial drift to nontarget areas.”

Quote: “Drift of the product was detected at considerable distance from the application boundary, 3.97 ug/ft2 (1.15 percent of the target application rate) at 17,400 feet in one instance.” ( p. 12)

Says Soquel resident Isabelle Jenniches “I live outside the spray zone, but we could feel and smell the spray. My husband and I had red eyes, dry mouths, and accelerated heart rates for days. My neighbor suffered a terrible asthma attack, the first in years. It is a well-known fact that airborne pesticides can drift for miles. This dangerous practice has to stop for good!”

During aerial spray operations last year, the pilots were to leave buffer zones around waterways and along the ocean. The now confirmed pesticide drift rendered these buffer zones meaningless. Storm run-off made things worse: after the spraying a thick yellow foam was observed in the water. Surfers reported the worst red tide in 40 years, which may have been fueled by phosphates and surfactants in the spray.

Says Frank Egger, president of the North Coast River Alliance “When I saw the photographs of thick yellow foam in the ocean after spraying, I knew that our waters had been contaminated. We now have proof of this. This is an outrageous violation of both state and federal laws and further puts endangered species such as steelhead trout and Coho salmon in jeopardy.”

3. The study also finds that pesticide capsules were not evenly distributed within the carrier substance (water), leading to inconsistent deposition rates of the spray. This may explain why some entire families became very ill when neighbors across the street did not. One property received a much larger exposure to chemicals than the other.

Quote: “The tank sample results showed a large amount of variability between samples for the same treatment and even within analysis of a single sample. […]The cause of the variability could be due to several factors. It was noticed that the microcapsules tend to separate out of the mixture quickly and require constant mixing.” (pp. 9 & 10)

The deposition study by the Department of Pesticide Regulations can be found at the CDFA website http://www.cdfa.ca.gov/phpps/PDEP/lbam/pdfs/docs/deposition_study.pdf

Santa Cruz, CA (November 6, 2008) In a second study, results of the so-called six-pack tests that examined the acute toxicity of four pesticide product to eradicate the Light Brown Apple Moth were released Tuesday. The California Department of Food and Agriculture (CDFA) hailed the study as proof of the products’ safety, while health advocates identify crucial inadequacies.

No long-term toxicity testing was included in either the newly released study nor in previous studies by the Department for Pesticide Regulation (DPR) and the Office for Health Hazard Assessments (OEHHA). Acute toxicity testing does not take into account that cancer and other illnesses often take years to appear. What's more, time-release pesticides, intended to be re-applied year after year, will keep the environment permanently saturated.

According to Roy Upton, LBAM Liaison for Citizens for Health “Nothing about the safety of the many pesticides used in the LBAM eradication program has been honestly represented by the agencies. Pesticides do not belong in our children's playgrounds or our homes. This program has to stop.”

Upton is co-author of a petition to reclassify the Light Brown Apple Moth (LBAM). The petition presents commanding scientific evidence that the moth does not endanger native ecosystems or crops. This petition has been submitted to the United States Department of Food and Agriculture (USDA) by Congressman Sam Farr (D-Carmel). It is accompanied with numerous endorsements by state legislators and esteemed entomologists.

The six-pack tests also did not assess the specific pesticide delivery system
used in the Fall of 2007 in Monterey and Santa Cruz counties: tiny plastic capsules, small enough to be breathed into the deep lung where they cannot be expelled, were rained down on Monterey Bay communities. The American Lung Association defines these tiny plastic capsules as "particulate pollution" capable of causing death. Following the spraying several children suffered first-time asthma attacks, including at least two children who nearly died from respiratory failure.

Says Lynberg "State agencies have done only a cursory investigation of the many illnesses, and they've added insult to injury by not interviewing a single patient or doctor. The hundreds of illness complaints we know about are likely just the tip of the iceberg because the state did not have an adequate monitoring system in place following the crop dusting of our schools, playgrounds and homes with pesticides."

Lynberg notes that the report's conclusion on page 13 admits that state agencies ‘cannot exclude the possibility that one or more ingredients in the LBAM product could cause an allergic response in sensitive individuals.'

Also, he observes that the state's report concedes that animal studies cannot adequately predict how chemicals will affect people, in part because only a few animals are tested, for very short periods of time, while hundreds of thousands of people were aerial sprayed and exposed to chemicals in the air for days and weeks.

Two medical doctors testified during hearings in the California state assembly that people's symptoms were consistent with the known toxins in the spray. Dr. Lawrence Rose M.D. M.P.H., a recently retired senior Public Medical Officer for the California Division of Occupational Safety and Health (Cal-OSHA), wrote a paper on the health effects of the LBAM spray which came to the same conclusion.

In his paper, Dr. Rose says: “These short term complaint symptoms are consistent with known toxicology scientific information of the ingredients of Checkmate (the pesticide sprayed in 2007). These ingredients include irritants, sensitizers, nervous system disrupters, endocrine disruption, allergens, and hypersensitivity induction. Long term health effects are also of concern due to the known induced mutations and suspected cancer risks of constituent chemicals.”

The executive summary of the petition to reclassify LBAM can be found at
http://forum.stopthespray.org/download/file.php?id=651

The toxicology study is posted at
http://www.oehha.ca.gov/pesticides/pdf/LBAMConsensus110308.pdf

The Light-brown Apple Moth (LBAM) was officially discovered in California in 2007 although it may have been in the state for up to 30 years. The California Department of Agriculture (CDFA) declared an administrative emergency, established quarantine zones, and launched a multi-million dollar eradication program. Aerial pesticide sprayings in the Monterey Bay area in fall 2007 resulted in reports of environmental damage and more than 600 health complaints. The pesticide spray posed a severe respiratory hazard and contained ingredients with established carcinogenic, mutagenic, and reproductive toxicities. CDFA announced on June 19, 2008, that it would no longer aerially spray urban areas for LBAM, but the eradication program, which proposes toxic ground treatments, continues.

About Stop The Spray

Stop The Spray (http://www.stopthespray.org) is a grass-roots movement that was founded by John Russo of Carmel Valley in October of 2007 as a public response to the aerial sprayings on the Monterey Peninsula. The movement focusses both on the people’s right to information and on the people's right to choose whether or not they consent to spraying programs that directly expose their bodies to toxins. As of September 2008 a petition started by Stop The Spray has been signed by more than 31,000 people. Stop The Spray has organizations throughout the entire San Francisco and Monterey Bay areas, extending from Sonoma through Marin, San Francisco, the East Bay, and south to San Mateo county.

END_OF_DOCUMENT_TOKEN_TO_BE_REPLACED
Add Your Comments
Latest Comments
Listed below are the latest comments about this post.
These comments are submitted anonymously by website visitors.
TITLE
AUTHOR
DATE
missing parallels
poisoned throughout history
Analysis of six pack studies of LBAM-F
John Thielking
Ominious Parallels Between Nazi Poison Gas and Calif Pesticide Spraying
Zyklon B
Support Independent Media
We are 100% volunteer and depend on your participation to sustain our efforts!