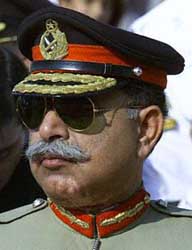 The US administration has one power that many
governments in the world may never have—the power not
to see, the envy of the worst blind person—, the way
the case of one of the chief suspects of the 911
attack was handled has revealed.

More than 3,000 people from 90 different national and
ethnic backgrounds were killed in the 911 attacks
launched by the Al Qaeda-I.S.I. on America and the
Pakistani man who did all this was on U.S. soil that
day, meeting high officials.

Analysts blame a strange cocktail of three factors
that led to a grand cover-up on the role of one of the
world's most roguish intelligence agencies, Pakistan's
Inter Services Intelligence, in the 911 terror attack
seven years ago—U.S. Vice president Dick Cheney's
support for the Pakistan army generals, huge business
interests of the military-industrial complex, and last
but not the least, the fear that Pakistan's nuclear
technology would be massively proliferated to avowed
enemies of the U.S. if Pakistani generals were made to
answer their deeds.

In stead of getting punished for its role, Pakistan
successfully secured as much as 12 billion in mostly
military aid as a U.S. "ally on the war on terror."

The money trail of the 911 leads to Rawalpindi,
headquarters of both the I.S.I. and Pakistan army, and
the city of deaths for Pakistani prime
ministers—Liaquat Ali Khan, Zulfikar Ali Bhutto and
Benazir Bhutto.

Pakistan's present army chief General Ashfaq Pervez
Kayani was less than two years ago the chief of the
despicable spy service that played a key role in
bringing down the Twin Towers, that symbolized
America's economic might, and the attack on the
Pentagon headquarters, a symbol of U.S. military
might.

The 911 terror attacks was a multi million dollar
project, incorporating the training and breeding of
sleeper cells and the main state financier was
Pakistan's I.S.I.-- chief sponsor of the Taliban.

Not many Americans know the key figure without whom
bin Laden's attack on the U.S. would never have
materialised is Lieutenant-General Mehmud Ahmed, an
army general from the most populous Punjab province,
who was chief of the I.S.I. at the time of the 911
attack. He was one of the key military leaders of the
nuclear armed Muslim nation with the world's fifth
largest army—one step ahead of the U.S--, until his
forced resignation after his role in the 911 attacks
was exposed in the media.

Cellphone intercepts are hard to disown and the
$100,000 to the lead hijacker Mohammad Atta before
the attack was sanctioned by Ahmed in his capacity as
chief of the 10,000-plus spy service.

Playing Cinderella, around 8:00 a.m., on that dark
day, Ahmed was at a breakfast meeting at the Capitol
with the chairmen of the Senate ad House Intelligence
Committees, Senator Bob Graham (D) and Representative
Porter Goss (R), a 10-year veteran of the CIA’s
clandestine operations wing.

At least one U.S. official was so incensed at Ahmed's
deception, he could not hide his anger. U.S.
Undersecretary of State Thomas Pickering bluntly told
him, “You are in bed with those who threaten us,”
according to Pakistani journalist Ahmed Rashid in his
new book “Descent into chaos: The United States and
the Failure of Nation Building in Pakistan,
Afghanistan and Central Asia.”

That money for the 911 attack was sent by I.S.I.'s
recruit Omar Sheikh, a Briton of Pakistani origin, to
lead hijacker Mohammed Atta, the FBI confirmed. Sheikh
was in active touch with Ahmed, cell phone intercepts
showed.

One of the Americans who know best about ISI's role in
the 911 attacks is John S. Pistole, deputy assistant
director of the FBI’s Counterterrorism Division.
Pistole testified to that effect before a
Congressional committee. He states the 9/11
investigation “has traced the origin of the funding of
9/11 back to financial accounts in Pakistan, where
high-ranking and well-known al-Qaeda operatives played
a major role in moving the money forward, eventually
into the hands of the hijackers located in the US.”

Even after 911, Omar Sheikh was active wth I.S.I.
operations and finally got convicted of murdering Wall
Street Journal reporter Daniel Pearl. As the FBI had
launched a massive manhunt for him, Sheikh was hiding
at the home of one of the highest law officials
Brigadier Ejaz Shah, also an ISI executive. [Just
weeks before her death, twice-premier Benazir Bhutto
the late spouse of Pakistan president Asif Ali
Zardari, had accused Shah, who was chief of the
Intelligence Bureau at the time of her slaying, of
being involved in plots to kill her. But for unknown
reasons Zardari avoided having him arrested].

It sounds strange why the U.S. never pushed for
Ahmed's arrest.

Pakistani generals, regardless of their jihadi
shenanigans, had a staunch supporter on the Capitol
Hill, U.S. Vice president Dick Cheney. "It is Cheney's
general philosophy that army generals and despots in
the Third World are the best allies of the U.S.," Mir
Hasil Bizenjo, a leader of the National Party and
close ally of former premier Nawaz Sharif, told this
correspodnent.

This policy saw the U.S lionize Musharraf and turn a
blind eye to the harm Pakistani generals had done to
the U.S. on 911.

But any theory or political philosophy in the U.S.
appears useless unless backed by powerful lobbies, in
this case the U.S. arms manufacturers and exporters.
Doing business with Pakistan, including supplying arms
to it, appeared to make better business sense to U.S.
policy makers than pushing it to the wall. Bolstered
in part by major new arms agreements with Pakistan,
the United States reclaimed its ranking as the
developing world's biggest supplier of conventional
arms in 2006, according to the Congressional Research
Service (CRS).

In other words, the U.S. leadership was balckmailed
and the I.S.I. got a second chance-- most of
Pakistan's Ahmed role was kept as classified
information and he is a respectable businessman in
Pakistan today.

Senate Foreign relations Committee chairman Joe Biden,
now the vice presidential candidate, has all along
been highly critical of the Pakistani role as he has a
clear insight on the I.S.I's pan Islamic designs.
Biden was specifically asked why the U.S. did not
arrest General Ahmed when he was in the U.S.

Biden said the reason under international praxis the
Pakistani general could not be arrested, explaining
“we did not arrest (Russian despot Nikita Khrushchev)
when he came.”


Just 19 days prior to the 911 attacks, the Asia Times
printed a news story about the visit of Ahmed and
Saudi King Abdullah, then crown prince, to Afghanistan
to convince Taliban “ruler,” or I.S.I. mole, Mullah
Omar to hand over the Saudi terrorist to the Kingdom.

One of the deep throats about the Al Qaeda-I.S.I.
links was a Canadian national named Ahmed Said Khadr,
who was killed in an army shootout two years after the
911. Khadr was involved in the bombing at the Egyptian
embassy in 1995 in Islamabad that killed 15 people.
Egyptians themselves tracked Khadr to a safe house in
Peshawar, where he was hiding and contact Ahmed, who
promises swift action. Instead, a car sent by the ISI
filled with Taliban and having diplomatic plates
arrives, grabs Khadr, and drives him to safety in
Afghanistan.


PROTEST: Join a protest in front of the Pakistan
Embassy on September 11 at 12 noon against Pakistan
army and ISI role in the attack on America. The
address of the embassy is 3517 International Ct., NW,
Washington DC 20008, near the Van Ness-UDC Metro
Station on the Red Line. You will have a chance to win
a T-shirt with the Twin Tower picture and "Pakistan
Army did it" inscribed on it.
For info contact 301-957-0008

Add Your Comments
§its big boys game
by Said Han
Wednesday Sep 10th, 2008 2:16 AM
some times things are very cmplecated for an ordenary man like my self, but no one can hide the truth, this is a big boys game and Baloch nation is a vectem of this dirty game.
some times so many Questions comes to my minde regarding Balochistan

1- why we are divided under iran and pokistan?

2-why afghanistan is not divided under them?

3-why iran or pokistan are not one country while both are islamic nation?

4- why pokistan is not a province of iran or the opisiet?

5-why GCC and other muslim nations are not parts of iran and pokistan?

7- why must Balochistan be parts of iran afghanistan and pokistan while we are totally defrrent from them?

8- why Gorgea is independent state while their populotion are only 5 millions while we are not and we are 40 million Balochs on the earth?

9- why east timor, Bahrain and many very smale islands are independent and our lands are such huge and still we are not?


why why and why somany Questions the world must answer us other wise whole world will suffer someday very soon.
Add a Comment
Support Independent Media
We are 100% volunteer and depend on your participation to sustain our efforts!