Add an Event
Newswire
Calendar
Features
Home
Donate
From the Open-Publishing Calendar
From the Open-Publishing Newswire
Indybay Feature
Publish to Newswire
Add an Event
Related Categories: Santa Cruz Indymedia | Global Justice & Anti-Capitalism | Labor & Workers
SEIU Union Office Attacked 5/23
by Wildcat Anarchists
Saturday May 24th, 2008 11:33 AM
On May 23, some anonymous actors left acid on a window of the SEIU union office on Mission St in Santa Cruz, and spraypainted the walls red and black with anarchy signs and revolutionary slogans:
"Solidarid@d Puerto Rico" SEIU is currently engaged in trying to break and control a nation-wide teachers' strike against the puppet government of Puerto Rico, a US colony. This is a perfect example of the role unions inevitably play in co-opting, selling out, and even crushing real strikes and revolutionary upsurges. For more documentation of this treachery, visit pr.indymedia.org en espanol, or simply search the internet for "puerto rico teachers."

"Support the janitors" on strike in San Jose, "not the union" that will order them back to work for a few dollars. May you never have to clean up after technocrats (the "little Eichmanns" of America) again. In this vein, we support the University of California service workers who will be striking on the 4th and 5th of June (unfortunately represented by AFSCME), and encourage them to "wildcat" strike when the two-day strike proves unsatisfactory. May you never have to clean up after and take care of drunken frat boys and sorority girls again.

"Hang the bosses by the guts of the bureaucrats!"

P.S. We forgot to add, fuck you city councilmember Tony Madrigal, and "professor of negotiaton" Bill Monning too. There's no such thing as a working class politician, and we would hate them even if there were.
§Support Janitors
by ~Bradley (bradley [at] riseup.net) Saturday May 24th, 2008 10:01 PM 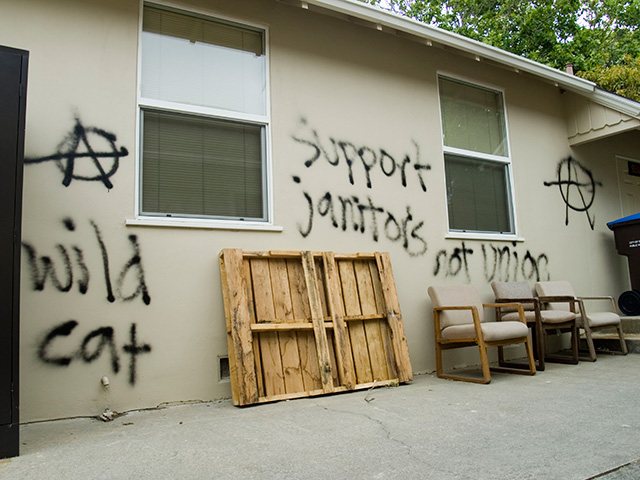 I won't comment on the action, but here are some photos of the graffiti and links so people can get a little better context

Underpaid and dissed, Puerto Rico’s teachers may walk out in defiance of anti-strike ban
http://www.uft.org/news/teacher/briefs/underpaid_and_dissed/ 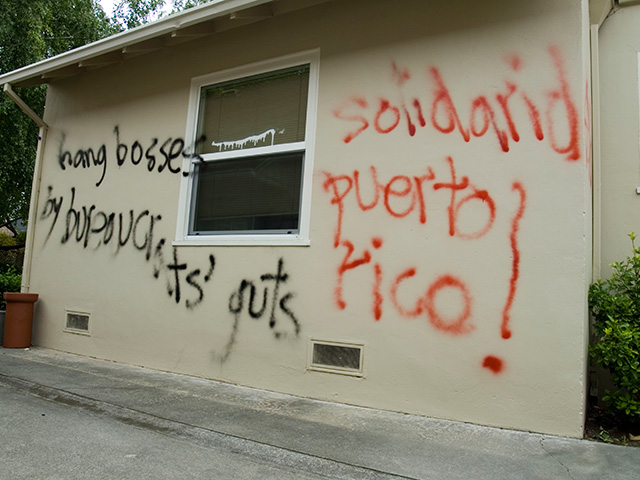 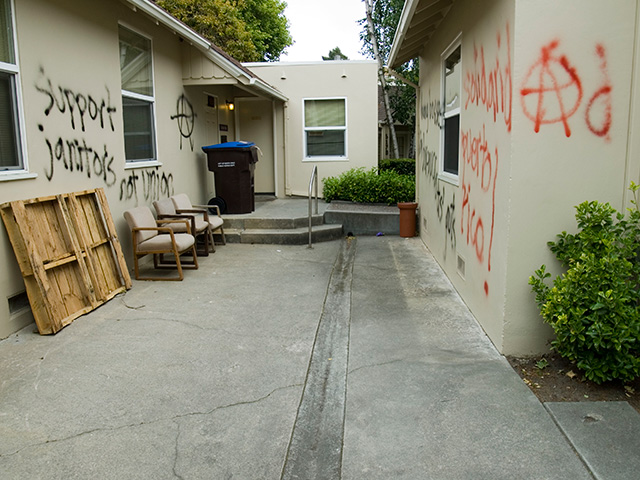 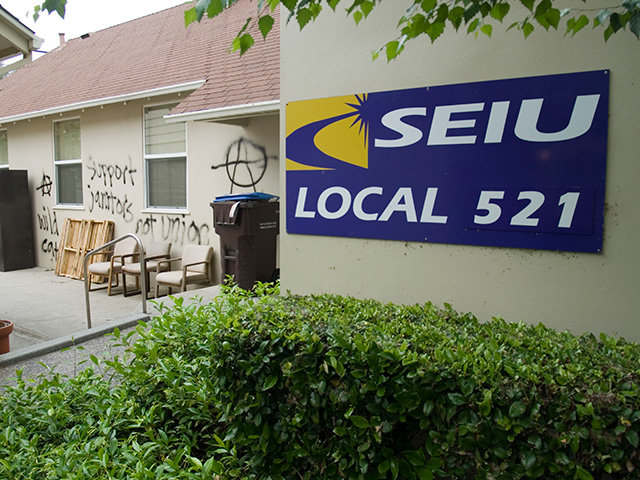 Some 250 teachers and education activists gathered in Los Angeles in April at the eighth Trinational Conference to Defend Public Education. For three days, representatives from several cities in the U.S., plus Canada, Mexico and Puerto Rico plotted a response to the creep of privatization into our schools.

In conversations, speeches and workshops, teachers detailed the many facets of what neoliberal education policies look like in different locations--for example, the gutting of the public education system in New Orleans. There were also the faces of the fightback--teachers from British Colombia, Puerto Rico and Oaxaca brought the stories of strikes that can help point the way forward for everyone.

During the conference, Gillian Russom and Sarah Knopp interviewed participants to share some of their lessons with SocialistWorker.org readers. The interviews will run in a series over the next week.

This first installment features an interview with Rafael Feliciano Hernández, president of the Teachers Federation of Puerto Rico. Teachers on the island struck earlier this year to try to win collective bargaining rights; oppose Law 45, which makes it illegal for teachers to strike; stop the transformation of Puerto Rican schools into charters; and stand up to reprisals against teachers who were organizing.

Teachers and education activists gathered at the Trinational Conference to Defend Public Education to document the different aspects of the neoliberal attack on public education and take stock of the lessons of the struggle against it. In this series of interviews, teachers from across North America and the Caribbean shared their experiences.

HOW DID you build up to the strike?

THIS WASN'T the first time on strike for the Teachers' Federation. In 1993, we had a one-day strike against charter schools. It was a big defeat that led to the demoralization of militants. The corruption and anti-democratic practices inside the union became extreme.

But between 2003 and 2008, we have radically transformed a union that had been a conservative force in the Puerto Rican labor movement. The student rebellion contributed to the teacher rebellion. The students put up a banner, and their resistance was transmitted to the level of the teachers.

In 2004, we disaffiliated from the American Federation of Teachers because their colonial relationship to us was impeding the development of our struggle.

From that point on, we had many short strikes around specific demands to improve education. They were all illegal. We had delegates' meetings of hundreds of teachers. The existence of political groups in the teachers' union facilitated the process. We had open debate in which everyone could expound their point of view, and this neutralized the agents of the state within the union.

We set the date of the strike for February 21. It was seen as a scandal that the teachers were talking about this. There were 1,300 representatives at our delegates' assembly meeting, and we voted to strike by 1,200 to 15.

Some 20,000 teachers supported the strike; 8,000 of them were on the picket line. During the strike, thousands of publications were produced, which created a great level of discussion. It was led from the bottom up. Leadership from the top kills the capacity to struggle.

HOW DID teachers feel about the illegality of the strike?

IT IS important to say that the immense majority of teachers had never before participated in strikes or work stoppages. They had to overcome fears, threats and pressure that management and its allies used to paralyze the strikers. This occurred in the context of the repressive Law 45, which prohibits strikes and criminalizes all actions that imply the interruption of labor in public agencies.

What else to read

Many of the issues discussed at the Trinational Conference and in these interviews are taken up in a paper written by Steve Miller and Jack Gerson, "The Corporate Surge Against Public Schools."

For a more general look at the imposition of neoliberal economic policies, read Naomi Klein's most recent book The Shock Doctrine: The Rise of Disaster Capitalism.

Jonathan Kozol has written numerous books exposing unequal conditions in U.S. schools, including Savage Inequalities: Children in America's Schools and The Shame of the Nation: The Restoration of Apartheid Schooling in America.

Kozol's interview in the International Socialist Review, "Change can't come without protest," takes up the issues in his books, plus the question of education activism.

The state made it a conflict between the FMPR and the state. All the media were against us. They were joined by both the AFL-CIO and Change to Win, which didn't have links with the communities or specific struggles.

The SEIU intervened with the Association of Teachers. Dennis Rivera and Roberto Pagán, among others, pressured the governor not to enter into agreements with the FMPR. This paralyzed the possibility of negotiation at the height of the struggle.

We didn't win our central demand, which was a collective bargaining agreement. We did win a raise, and the promise of a future raise, as well as an agreement that there will be no charter schools in Puerto Rico.

We also developed a new layer of leaders and militants: 8,000 teachers who no longer just talk about struggle because they've done it. They speak from a class perspective. It's not just a matter of dollars and cents. The strike process is an emancipatory and decolonizing experience. We gained a lot: the union and the country are not the same.

Would we have been able to do all this without the political groups within the union, which made the connections with what's happening in the world, with the war, with the gap between rich and poor? I think no. The workers would have been too constricted by the bosses' vision of the world.

DO YOU think the strike was a victory?

When we ended the strike, I was so happy, because there were no repression and reprisals. People were ecstatic. Other people asked me, 'Why are you so happy? We didn't win collective bargaining.'

A broad coalition of activists will gather Wednesday, May 28 in New York City to express support for Puerto Rico’s embattled teachers and schoolchildren, to protest the decision of SEIU’s leadership to launch an attack on the existing teachers union and to exhort SEIU to cease this activity.

SEIU--facing a well-publicized internal battle--begins its Convention in Puerto Rico next week in the shadow of its attempt to take over the Island’s 42,000-member teachers’ union. SEIU’s “raid” comes on the heels of sustained efforts by the Puerto Rico Teachers Union (FMPR)—united with parents and students--to fight against:

the negative effects of “No Child Left Behind”

abysmal salaries—monthly average of $1600 with living costs higher than those in the US.

After nearly three years of working without a contract, the teachers unanimously voted to strike in a mass union meeting of over 7,000 members in November 2007. While negotiations continued, sources report that SEIU leader Dennis Rivera was meeting with Puerto Rico Governor Anibal Acevedo Vila.

According to the New York Daily News, the Governor told Rivera that the teachers’ union is “yours to take.” Previously El Diaro-La Prensa reported that Rivera had discussed the teachers union with Acevedo in addition to possible SEIU monetary support for the Governor, who has recently been indicted on corruption charges.

The Puerto Rican government declared the teachers’ strike illegal, based on the vote alone—the actual strike was not called until late February 2008--and moved to decertify FMPR. Almost simultaneously, SEIU announced that the Island’s union of school principals and supervisors was affiliating with SEIU—and would attempt to take over the teachers’ union.

In the aftermath of the 10 day strike that paralyzed the nation’s public schools with unprecedented support and participation from teachers, students and parents, FMPR continues its work as the representative of the Island’s teachers, negotiating with the government over school conditions while fighting for recognition as the bargaining unit.

The Delegate Assembly of New York City’s United Federation of Teachers (UFT) declared solidarity with the Puerto Rico teachers and voted unanimously to “support the Puerto Rican teachers in their struggle to be treated with dignity.” CUNY’s Professional Staff Congress (PSC) resolved to “participate in strike support efforts and solidarity with the striking teachers of the FMPR.” The struggle was discussed at NYC’s Central Labor Council, and the California Federation of Teachers, having sent funds already to support FMPR, plans to urge the AFT to do so as well.

SEIU leadership is in the midst of a tremendous internal struggle with sectors within the union advocating for greater member democracy. As these members engage President Andy Stern and other leaders inside the Convention Hall—ironically to be held in Puerto Rico--FMPR teachers will surely protest what they view as SEIU’s sabotage of the struggle for quality education on their island nation. SEIU leaders’ apparent collusion with the government/employer of teachers in Puerto Rico echoes similar accusations of what critics characterize as a recent trend toward “sweetheart deals” with employers in the private sector on the mainland.

Here in NY, 1199/SEIU, one of the international’s locals with an exemplary reputation as a progressive union, recently launched a series of attempted raids against the New York State Nurses Association (NYSNA), which represents Registered Nurses. These raids occur as NYSNA’s nurses battle hardened employers who are attempting to diminish nurses’ power as they advocate for quality care for their patients, further escalating the inter-union wars on the mainland.

Rather than destabilizing already difficult situations faced by unions--particularly in a nation such as Puerto RIco that has its own particularities--SEIU’s leaders need to focus on their members as they grapple with the difficult questions that face trade unionists today.
http://www.anarchistblackcat.org/viewtopic...
Add Your Comments
LATEST COMMENTS ABOUT THIS ARTICLE
Listed below are the latest comments about this post.
These comments are submitted anonymously by website visitors.