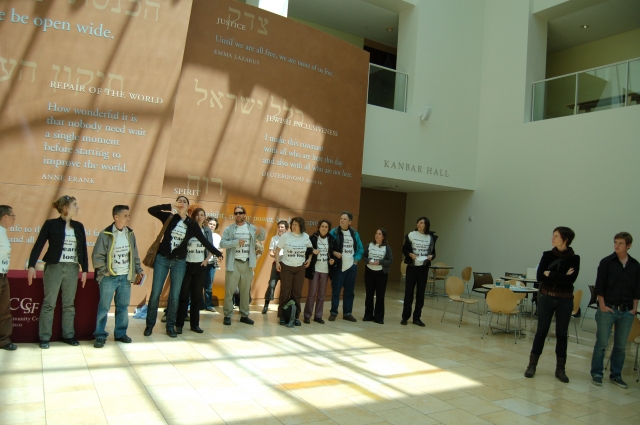 original image (3008x2000)
San Francisco—In response to Israel's 60th anniversary celebrations,
20 Jewish activists were arrested, demonstrating Jewish opposition to
Israel's 60-year-old policy of dispossession, and highlighting the
often-silenced struggle of Palestinian refugees. For over two hours,
20 Jewish activists disrupted San Francisco's anniversary event,
bunkering against the main atrium of the Jewish Community Center
(JCC). In conjunction, over fifty Jewish and Palestinian supporters
held a rally outside the center to call attention to ongoing Israeli
policy of apartheid against the Palestinian population. With banners
reading, "Jews in Solidarity with 60+ years of Palestinian
Resistance," activists declared anniversary, "No Time to Celebrate."

"The dire humanitarian crisis in Gaza is a brutal example of Israel's
long history of ethnic cleansing and collective punishment against
Palestinians," Sara Kershnar, anti-Zionist Jewish activist arrested.
"We are here today to condemn the JCRC's celebration of this history
along with unconditional economic and political support for Israeli
policy."

The action in San Francisco, organized by the local International
Jewish Solidarity Network, is part of "No Time to Celebrate," a
national Jewish campaign opposing Israel's 60th Anniversary
celebrations, while simultaneously amplifying the American Jewish
community's critique of Israeli policy. The Israeli Consulate and the
Jewish Community and Relations Council (JCRC), who have attempted to
silence any and all criticism of Israeli policy, a were the sponsors
of this event.

"As Jews of conscience, acting in solidarity with 60-plus years of
Palestinian resistance, we're here today to promote an "Independence"
that does not depend on an ethnically or religiously exclusive state
or on the displacement of indigenous people," said Eric Romann, IJSN
organizer. "We want is joint liberation, not isolation."

Throughout the month of May, Jewish organizations in cities across the
U.S. and Canada are sponsoring celebrations of "Israeli Independence
Day." Simultaneously, Palestinians around the world are mourning 60
years since the Nakba—Arabic for the "catastrophe"—of 1948, when
Zionist militias destroyed and depopulated over 400 Palestinian
villages and caused over than 725,000 Palestinians to become refugees
in order to create the Israeli state*.

Today, there are over 4.5 million registered Palestinian refugees, and
more than one million not registered, scattered throughout the
world**. These Palestinian refugees are still awaiting the
implementation of international law allowing the Right to Return to
their homeland. The majority of Palestinians living in the Gaza Strip,
descendents of those refugees who fled their homes and villages in
1948, are subject to Israel's crushing blockade and are undergoing
intolerable living conditions. Israel's policies of preferential laws
and treatment for Israeli-Jews—not Palestinian Israelis—within
Israel-proper, and military impunity for Palestinians in the Occupied
Territories are reflective of a long history of horrific
discrimination. 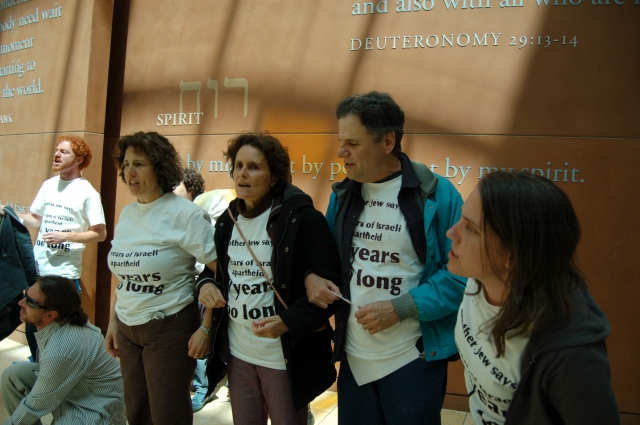 original image (3008x2000)
The activists presented the JCRC with a statement, with the following demands:


To stop the targeting of non-Jewish organizations, particularly of organizations serving communities of color in the San Francisco Bay Area and beyond, that criticize Israel and/or express solidarity with Palestine
To stop claiming that anti-Zionism and criticism of Israel are anti-Semitic
To acknowledge that they do not speak for the full organized Jewish community—that Jewish voices that criticize Israel and Zionism are legitimate voices of dissent within Jewish communities
To criticize Israeli Deputy Defense Minister, Matan Vilnai threat of a "shoah" against the people of Gaza and demand a public apology for the exploitation of the Nazi genocide against the Jewish people for the continued ethnic cleansing of Palestinians.
§
by M. Thursday May 8th, 2008 8:14 PM 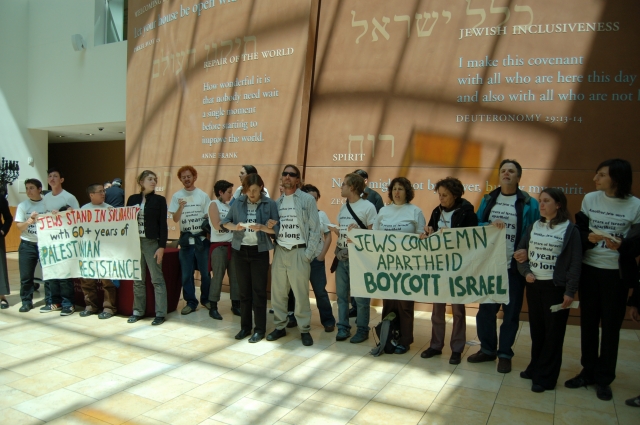 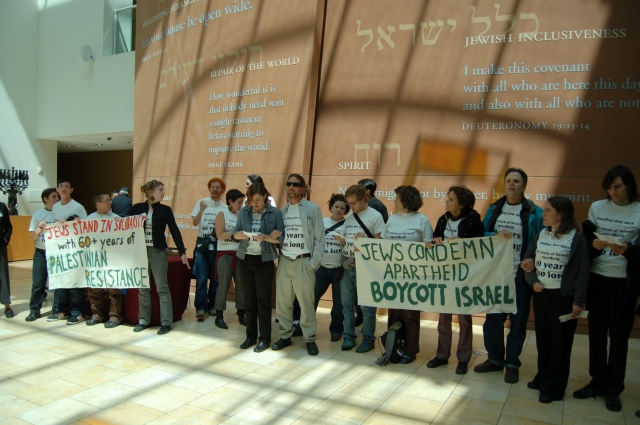 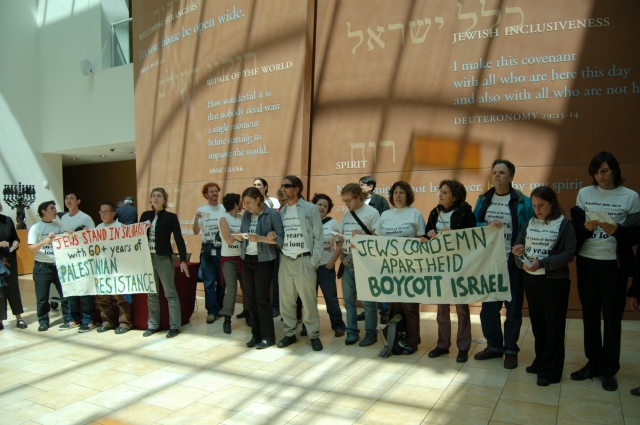 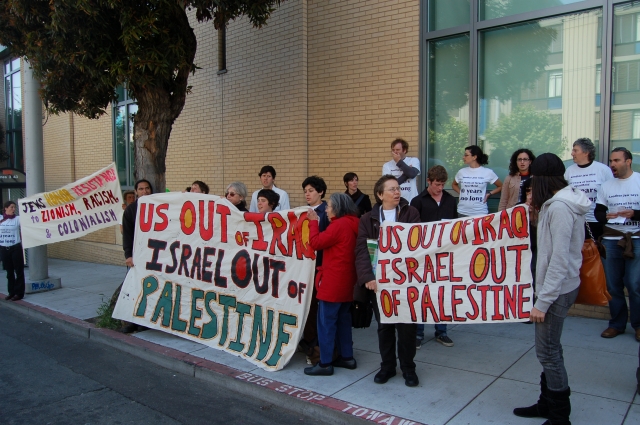 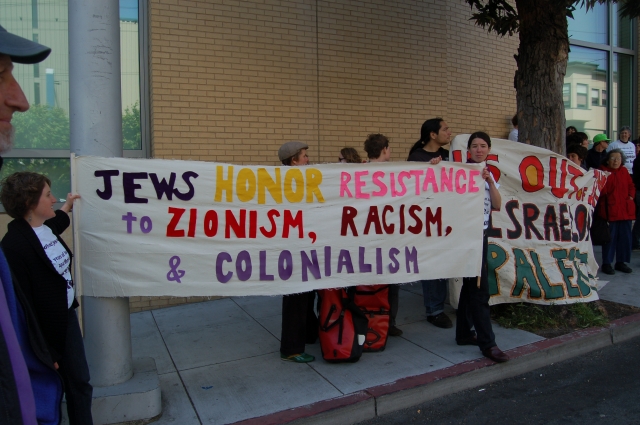 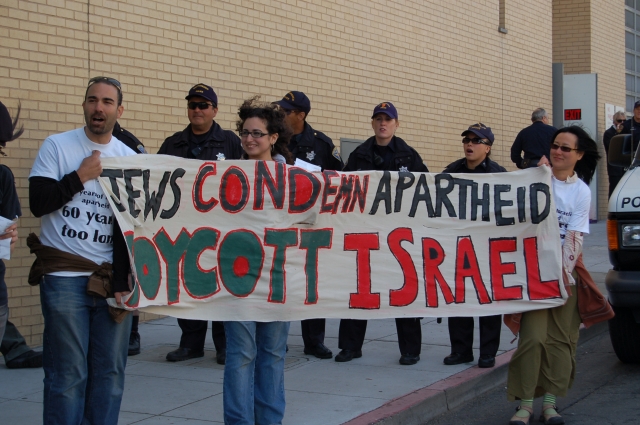 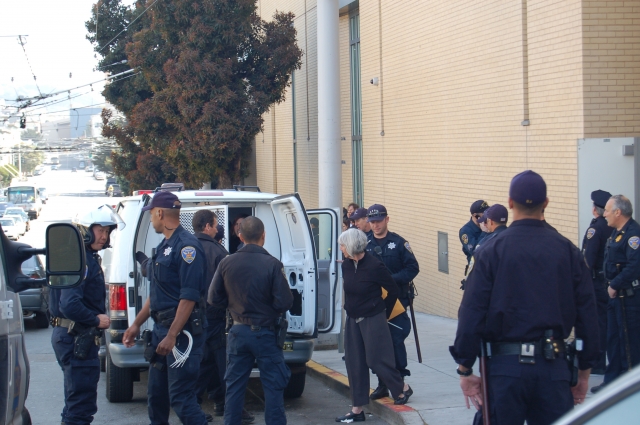 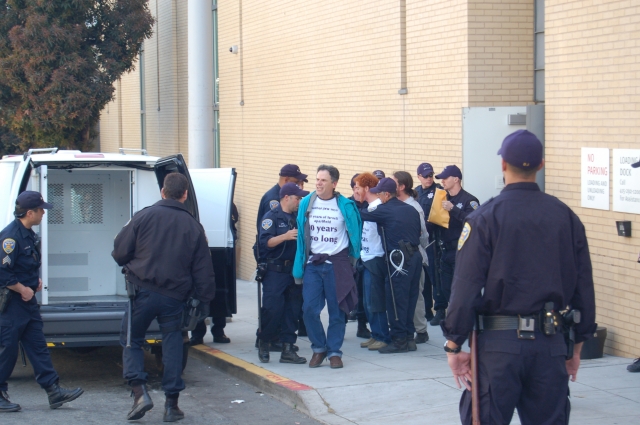 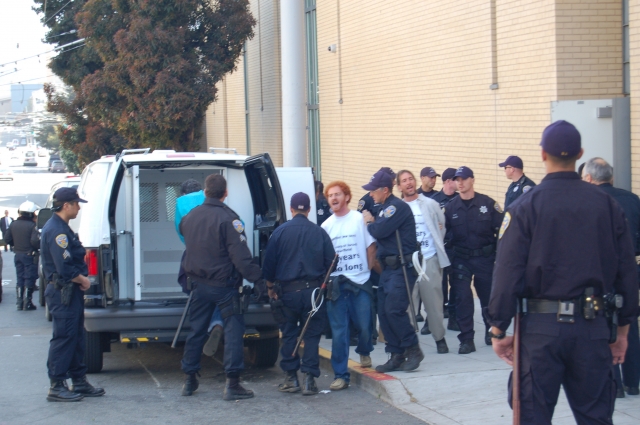 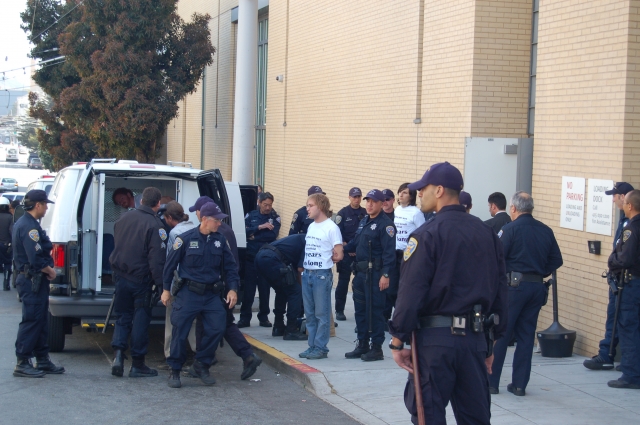