Add an Event
Newswire
Calendar
Features
Home
Donate
From the Open-Publishing Calendar
From the Open-Publishing Newswire
Indybay Feature
Publish to Newswire
Add an Event
Related Categories: U.S. | Police State & Prisons | Racial Justice
Photos of April 19 Mumia Demo in Philadelphia
by Hans Bennett
Tuesday Apr 22nd, 2008 5:51 PM
This is a photo-essay from the April 19 demonstration in Philadelphia, supporting death-row journalist Mumia Abu-Jamal, whom many consider to be a political prisoner. The demonstration of over 1,000 people was a response to the recent Third Circuit Court ruling denying a new guilt-phase trial. 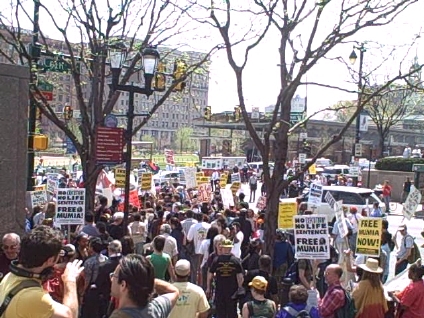 The demonstration started at the Federal Courthouse, which is just across the street from the Liberty Bell, in downtown Philadelphia.

After gathering at the courthouse for several hours, protesters marched around the Liberty Bell, where they ran into an anti-Mumia counter demonstration displaying signs with such assertions as "Fry Mumia and His Supporters."

As detailed in a flyer released before the April 19 Mumia demonstration in Philadelphia, and an article at the anti-racist One People's Project website, there was a counter-protest across the street from the Liberty Bell during the April 19 Mumia demonstration, that was organized by the racist “Keystone State Skinheads” group (KSS) and other fascists.

The KSS are staunch advocates of Mumia's execution. Photos on the KSS website feature KSS member Keith Carney at the Maureen Faulkner book signing last December at Geno’s Steaks, an establishment now famous for their “This is America, Speak English” sign on the front window. Carney was recently released from prison after his conviction for assaulting a black man. He now attempts to present a public image that is less overtly racist by replacing racial slurs with phrases like “welfare mom” and “drug-dealer,” as illustrated by the shirt he is wearing in the photo at Geno’s, which reads “Kill Your Local Drug Dealer.”

After confronting the racist counter-protest, the march then proceeded to Philadelphia City Hall. After circling City Hall several times and occupying the street in front of the building at 15th and Market, protesters gathered at City Hall's Northwest corner and heard many speakers including Cynthia McKinney, Julia Wright, Herman Ferguson, Harold Wilson, and Mumia's daughter, Goldi.

In all, this major event lasted from 10am to 3:30pm and drew well over one thousand protesters, according to the Philadelphia Metro Newspaper. The event marked the release of the new Journalists for Mumia newspaper, at which over 2,000 copies were given out to protesters and other interested pedestrians throughout the day.

Please stay tuned for my new video documenting the day. Along with footage of the many speakers, the video will feature exclusive interviews that I got with Veronica Jones, Goldi (Mumia's daughter), and exonerated former death-row prisoner Shujaa Graham. 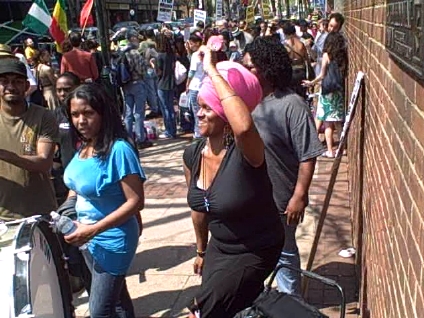 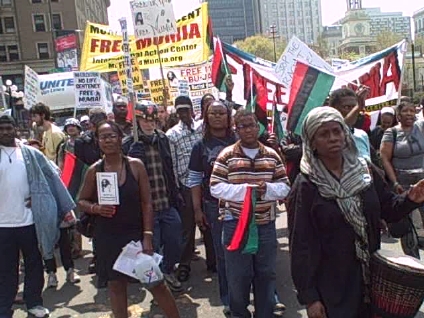 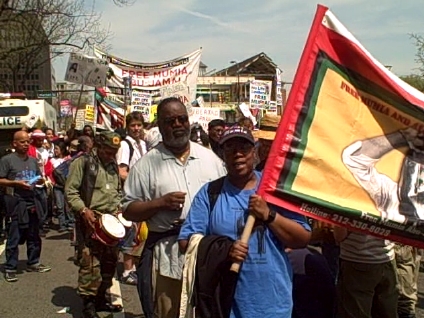 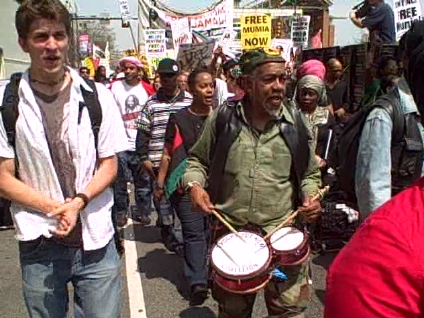 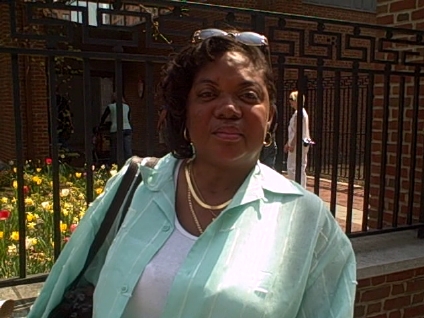 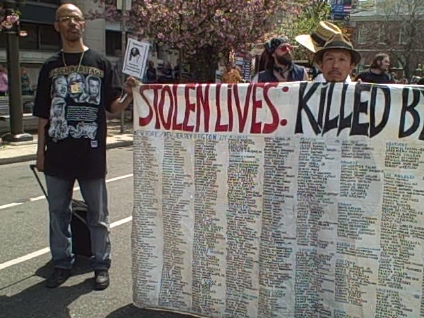 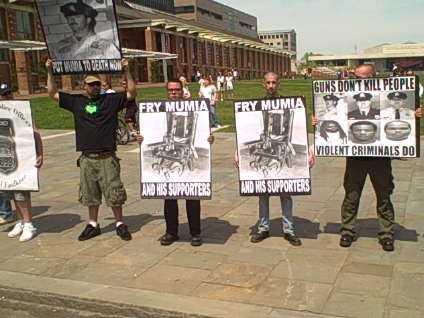 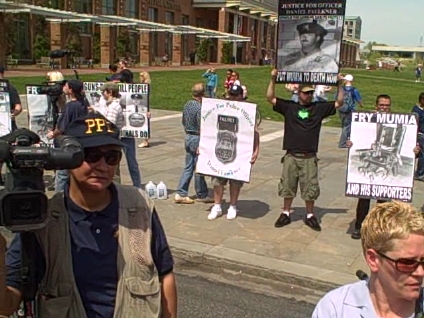 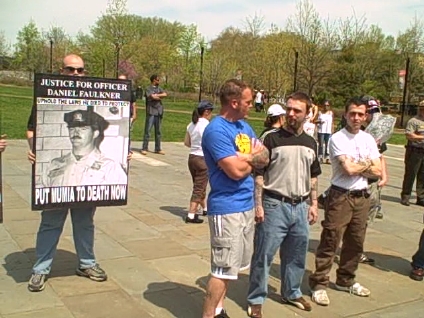 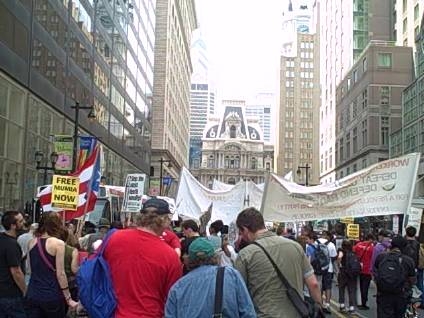 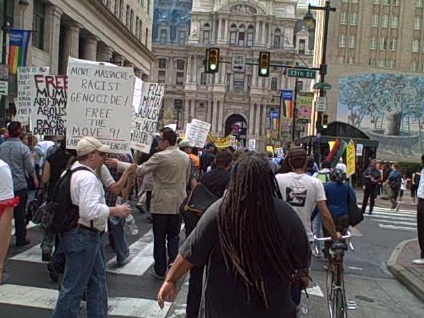 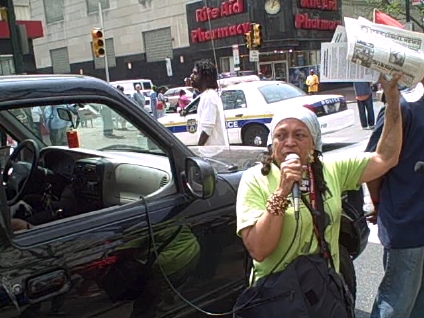 Africa holds Journalists for Mumia newspaper during a stop along the way to City Hall. Market Street onlookers were very interested in the event, and accepted many newspapers
http://Abu-Jamal-News.com
§City Hall
by Hans Bennett Tuesday Apr 22nd, 2008 5:51 PM 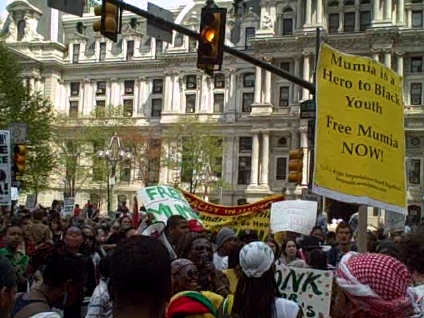 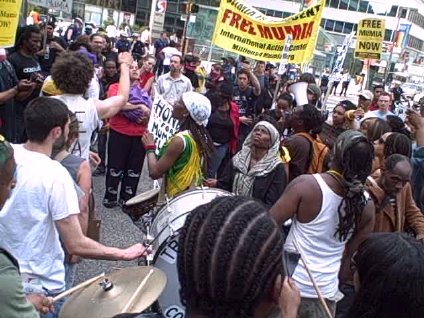 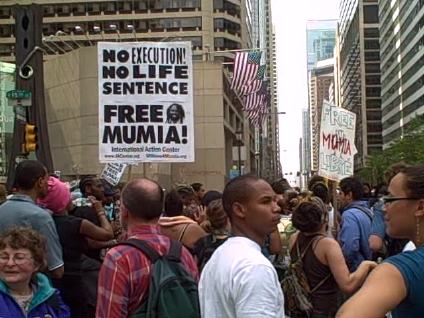 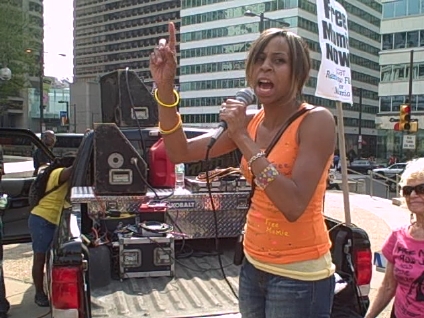 Towards the end of rally, many spoke on the loudspeaker.
http://Abu-Jamal-News.com
§Harold Wilson speaks
by Hans Bennett Tuesday Apr 22nd, 2008 5:51 PM 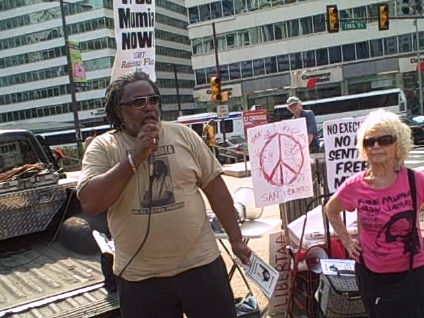 Exonerated, former death-row prisoner Harold Wilson was at the same prison as Mumia and is his friend. Wilson was granted a new trial because of the Batson issue of racist jury selection in Phila, and was released at the new trial based on DNA evidence.
http://Abu-Jamal-News.com
§Julia Wright
by Hans Bennett Tuesday Apr 22nd, 2008 5:51 PM 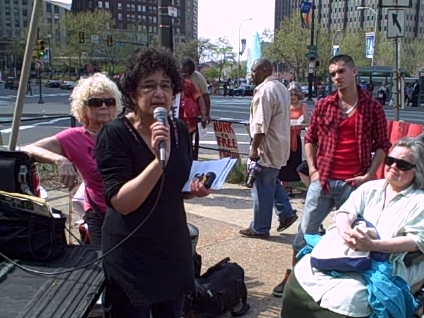 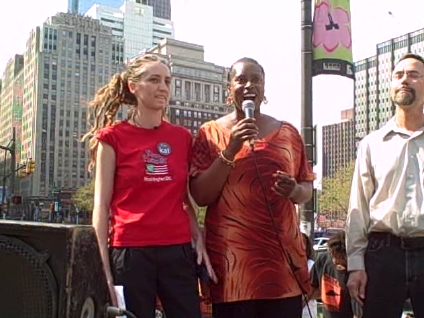