Add an Event
Newswire
Calendar
Features
Home
Donate
From the Open-Publishing Calendar
From the Open-Publishing Newswire
Indybay Feature
Publish to Newswire
Add an Event
Related Categories: Santa Cruz Indymedia | Anti-War | Education & Student Activism
Week Against War at UCSC March 10th - 14th
by Students Against War
Sunday Mar 9th, 2008 4:42 PM
March 19th 2008 marks the 5 year anniversary of the war in Iraq, a day that also means finals for students. But we will not let the war be forgotten! So on Friday, March 14th, gather in the baytree plaza to SPEAK OUT AGAINST THE U.S. OCCUPATION IN IRAQ from 3-5 PM. 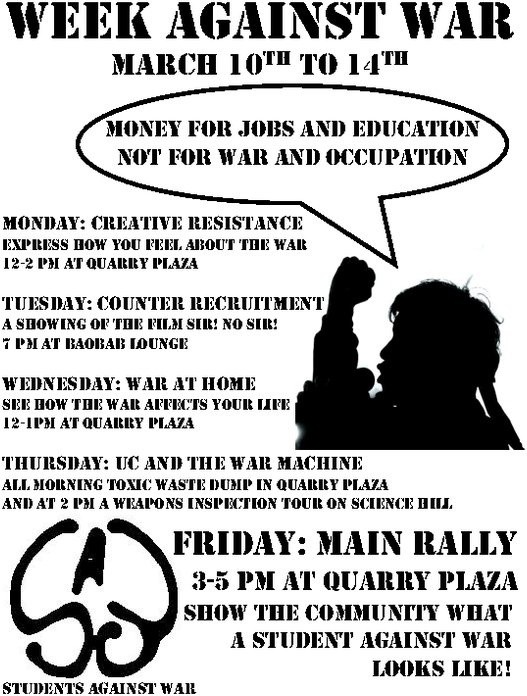 Download PDF (81.7KB)
Monday - CREATIVE RESISTANCE - in the baytree plaza, use art, poetry, and music to resist the war. 12-2PM

Thursday - YOU, THE UC AND THE WAR - featuring a toxic waste site in the quad and a UC weapons inspection tour at 2 PM on Science Hill!

And finally, after the rally on Friday, head up to the conference rooms above the Bay Tree Bookstore to attend a Students Against War meeting, where we can all talk about next steps in resisting the war and war everywhere.

See you there!
Add Your Comments
Support Independent Media
We are 100% volunteer and depend on your participation to sustain our efforts!