Add an Event
Newswire
Calendar
Features
Home
Donate
From the Open-Publishing Calendar
From the Open-Publishing Newswire
Indybay Feature
Publish to Newswire
Add an Event
Related Categories: Central Valley | Environment & Forest Defense
Unprecedented Collapse of Central Valley Salmon Is No Surprise
by Dan Bacher
Tuesday Feb 19th, 2008 3:52 PM
State, federal and tribal biologists are meeting this week to collate coastwide salmon stock abundance forecasts. Preliminary data from the Pacific Fishery Management Council, a quasi-governmental body, points to an "unprecedented collapse" in Central Valley chinook salmon stocks. The stocks have declined from a record abundance of 804,401 fish in 2002 to only 90,414 salmon in 2007. While the state and federal governments are blaming "ocean conditions" for this ecological catastrophe, fishermen and environmentalists believe that massive increases in water exports from the California Delta in recent years have played a major role in the chinook's precipitous decline. 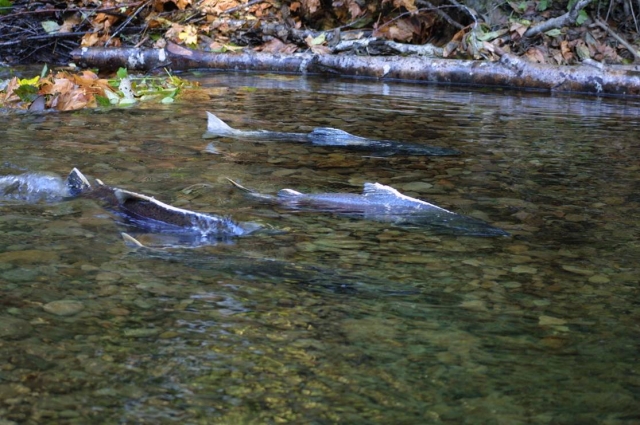 The latest federal government data on 2007’s chinook salmon run on the Sacramento River points to an “unprecedented collapse” in the fishery considered for years to be one of the most healthy on the West Coast.

To anglers and environmentalists working to restore California fisheries, the collapse is no surprise, since it parallels the dramatic decline of delta smelt, longfin smelt, juvenile striped bass, threadfin shad and other species on the Sacramento-San Joaquin River Delta. Both the salmon collapse and the precipitous decline of California Delta pelagic (open water) fish species are believed to be largely the result of massive increases in state water exports since 2001.

If the data is verified in upcoming meetings of the Pacific Fishery Management Council (PFMC), commercial and recreational salmon fishing in California and Oregon ocean waters and recreational salmon fishing in Central Valley rivers could be closed or severely restricted in 2008. This alarming news couldn’t come at a worse time, since recreational and commercial fishermen are already reeling from draconian restrictions on rockfish, lingcod and other groundfish in California.

“The magnitude of the low abundance, should it be confirmed in verification efforts now underway, is such that the opening of all marine and freshwater fisheries impacting this important salmon stock will be questioned in the upcoming Council process to set 2008 ocean salmon seasons,” according to an internal memo of the Pacific Fishery Management Council (PFMC) by Donald O. McIsaac, Ph. D, Executive Director. “This is particularly disconcerting in that this stock has consistently been the healthy ‘work horse’ target stock for salmon fisheries off California and most of Oregon.”

• The adult spawning escapement for the Central Valley stock in 2007 failed to meet the goal for the first time in 15 years and only the second time in 35 years. “This unexpected result indicates the carry-over of older fish in the ocean that might contribute to 2008 abundance will probably also be weak,” said McIssac.

McIssac said there “were informed discussions” about whether a reasonable forecast of abundance in 2008 could rise to the point of achieving the spawning escapement goal in the absence of any commercial or recreational salmon fishing anywhere on the West Coast that Central Valley fall Chinook are typically found in significant abundance.

“It is important to note that the current information needs to be verified and validated, and that it is three or four weeks before the documents are finalized that the Council will use in its deliberations,” explained McIssac. “However, it is typical that the estimates at this stage do not vary much from the finalized values.”

“What is not clear at this time is the reason for the apparent collapse, although it is notable that both hatchery and naturally produced fish have been negatively affected,” he concluded.

In an official press release issued after the internal memo was disclosed, the PFMC reiterated that the reason for the decline was “ unclear,” mentioning “ocean conditions” as a probable cause.

“Both hatchery and naturally produced fish have been negatively affected, and returns of coastal stocks in Oregon, in the Columbia River, and in British Columbia were all low in 2007,” the PFMC said. “The decline seems to be a coastwide phenomenon, probably related to ocean conditions.”

Sacramento River chinook salmon have a greater range than Klamath River stocks and are caught in California, Oregon, Washington, and even British Columbia. They are considered the “driver,” the “work horse” of commercial fisheries in Oregon and California.

Other potential causes of the salmon decline include decreases in krill and forage fish populations off the coast, the increase of sea lion and harbor seal populations, the invasion of northern and Central California waters by the highly predatory Humboldt squid, water pollution, climate change and other factors.

Although ocean conditions and other factors are all important to consider, anglers and environmentalists believe that unprecedented water exports out of the California Delta to subsidized agribusiness and southern California in recent years have probably played a major role in the collapse of Sacramento and San Joaquin chinook populations. Although the numbers of salmon returning to spawn in other rivers along the West Coast were down last year, none approached the fishery catastrophe encountered on the Sacramento River.

The salmon are apparently the victims of the Delta food chain crash that has resulted in record low numbers of delta smelt, longfin smelt, juvenile striped bass and threadfin shad in the California Delta since 2005. During 2005, an unprecedented 6.4 million-acre feet of water was exported out of the Delta by the state and federal governments.

The salmon that returned in 2007 as “jacks and jills” – two year old fish - would have migrated downriver in 2005 at the same time that record water exports were taking place. Those smolts may have starved from lack of food as they migrated through the Delta, never making it to the ocean. Or they may have ended up stranded in South Delta sloughs and channels, sucked in by powerful reverse flows caused by export pumping, if not destroyed in the pumps themselves.

Another key factor in the decline was the fact that the pen release program of the Fishery Foundation of California was not in place in 2004 and 2005. Through this program, the salmon smolts are released into brackish water after being acclimated for 1 to 2 hours. This program cuts down greatly on smolt mortality.

The absence of the pens apparently contributed to increased salmon mortality when the DFG released them into San Pablo Bay those years. Fortunately, the program will be in place this year when the salmon are released into the bay.

Recreational anglers are alarmed about the crash in the salmon numbers and are urging the Bush and Schwarzenegger administrations to take immediate action to restore the once abundant fish populations.

“This news about the salmon population collapse is not surprising considering the decline of the California Delta food chain caused by increased export pumping by the state and federal governments,” said Dick Pool, owner of Pro Troll products and coordinator of Water4Fish.org. “We need the state and federal governments to solve this problem by reducing water exports and taking other measures to restore Central Valley salmon."

John Beuttler, conservation director of the California Sportfishing Protection Alliance, agreed. “I’m betting on the fall run salmon being victims of impacts associated with the ever increasing export of water that deprives the Bay-Delta ecosystem of roughly half of the fresh water that used to flow through the system naturally," said Beuttler.

After receiving word of the low abundance of Central Valley salmon forecasted in 2008, Jim Martin, West Coast Regional Director of the Recreational Fishing Alliance, said he hoped that the PFMC was able to keep a recreational chinook season open because of the minimal impact of recreational anglers on the overall salmon population. “If the Council closes salmon fishing completely, it will put more pressure on the rockfish population,” said Martin.

Meanwhile, the situation in the Delta isn’t getting any better. The state and federal governments exported 7,000,000 acre feet of water out of the Sacramento-San Joaquin River Delta in 2007, a new record year for water exports.

"The Department of Water Resources and Bureau of Reclamation cannibalized the storage in our northern California reservoirs to provide the largest amount of water exported from the Delta in California history last year," noted Bill Jennings, chairman of the California Sportfishing Protection Alliance.

• Hearings on salmon season options will be convened March 31 in Westport, Washington and Coos Bay, Oregon, and April 1 in Eureka, California. The PFMC meets in Seattle, WA April 6-12, 2008 to reach a final decision on 2008 salmon seasons.

• Federal and State government authorities formally establish marine and freshwater salmon seasons subsequent to final Council action.
Add Your Comments
LATEST COMMENTS ABOUT THIS ARTICLE
Listed below are the latest comments about this post.
These comments are submitted anonymously by website visitors.