Cimperman Campaign Against Kucinich is Based on Lies

by DofLiberty
This talk of Kucinich neglecting Cleveland is based on outright lies, circulated by ignorant people that are too lazy and unpatriotic to bother checking his official record to see that his defense of his constituents has also been his defense of the rest of this country. 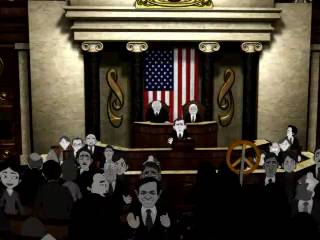 This talk of Kucinich neglecting Cleveland is based on outright lies, circulated by ignorant people that are too lazy and unpatriotic to bother checking his official record to see that his defense of his constituents has also been his defense of the rest of this country.

Dennis Kucinich is one person. He's had very little support in his defense of American workers whose jobs continue to be outsources and small business owners and self-employed Americans that just can't compete with those big corporate gluttons that buy up suppliers, merge with, acquire, or crush their small competitors to gain full-blown monopolies. That he can't get the support from all those corporate shills in the Democratic Party is not his fault. It's the fault of those traitors that control the Democratic and Republican party. It's also the fault of ignorant voters that don't bother to get their facts straight before they start blaming the wrong people for all the bad news.

The corporate-friendly politicos that serve their Big Business and Big Industry backers in Washington set the stage for predatory lenders to help crash the housing market at a time when jobs are being outsourced. Corporate-loyal politicians have done a lot of things to prevent people from having the means to support their local economy. So, if Cleveland is running out of money, you'd better take a broader, deeper look at all the things that contributed to the lack of monetary circulation. If you have half a brain, you might discover that Dennis Kucinich has been fighting great odds against the forces responsible for those things. This means, you need to stop relying on ad rags passed off as newspapers and on the entertainment industry and General "War Contractor - Manufacturer" Electric for your information. Check his congressional record. Check the congressional record of all those other politicians in Congress. If you can't figure out the obvious, then maybe you're blinded by bias.

I noticed some lies coming from the Cimperman campaign, too. Once again, anybody that actually paid attention will know that Dennis Kucinich never neglected District 10 for his presidential bid. He spent more time in Washington D.C. than most other candidates. He rushed back to D.C. to be involved in vital voting activities, which meant less time for him to dedicate to his presidential campaign. Any really informed person on Dennis Kucinich's congressional activities knows this. Obviously, his critics here don't. They'd rather believe the lies being told to smear Kucinich. Hardly patriotic and not very smart.
Add Your Comments
Latest Comments
Listed below are the latest comments about this post.
These comments are submitted anonymously by website visitors.
TITLE
AUTHOR
DATE
Don't Preach to the Choir, Counter Them
Treva
ciperman
lara
Kucinich for Congress
InsuranceTeaseDOTcom
Such a shock...
Janna
Support Independent Media
We are 100% volunteer and depend on your participation to sustain our efforts!