Add an Event
Newswire
Calendar
Features
Home
Donate
From the Open-Publishing Calendar
From the Open-Publishing Newswire
Indybay Feature
Publish to Newswire
Add an Event
Related Categories: Palestine
Hamas condemns the “Historic Oppression” on the 60th Anniversary of UN Resolution 181
by al-masakin
Thursday Nov 29th, 2007 1:18 PM
Hamas: Palestine could not be partitioned by resolutions or agreements

GAZA, Nov. 29 (PIC)—The Hamas Movement on Thursday held the UN fully responsible for the tragedies that befell the Palestinian people as a result of the “oppressive” resolution 181 that sanctioned the partitioning of Palestine and allowed the creation of the Hebrew state. 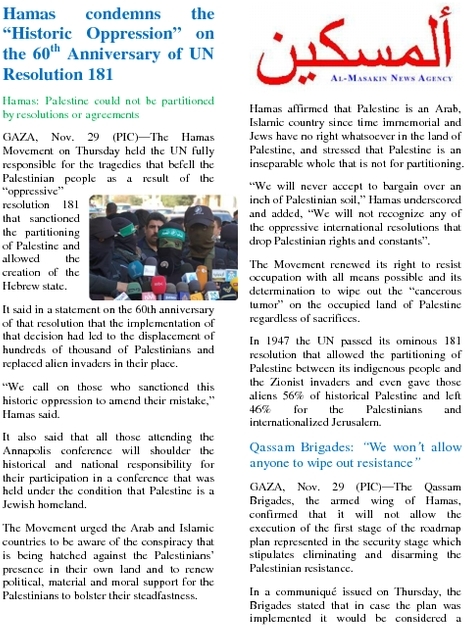 Download PDF (109.3KB)
It said in a statement on the 60th anniversary of that resolution that the implementation of that decision had led to the displacement of hundreds of thousand of Palestinians and replaced alien invaders in their place.
“We call on those who sanctioned this historic oppression to amend their mistake,” Hamas said.

It also said that all those attending the Annapolis conference will shoulder the historical and national responsibility for their participation in a conference that was held under the condition that Palestine is a Jewish homeland.
The Movement urged the Arab and Islamic countries to be aware of the conspiracy that is being hatched against the Palestinians’ presence in their own land and to renew political, material and moral support for the Palestinians to bolster their steadfastness.

“We will never accept to bargain over an inch of Palestinian soil,” Hamas underscored and added, “We will not recognize any of the oppressive international resolutions that drop Palestinian rights and constants”.

The Movement renewed its right to resist occupation with all means possible and its determination to wipe out the “cancerous tumor” on the occupied land of Palestine regardless of sacrifices.

In 1947 the UN passed its ominous 181 resolution that allowed the partitioning of Palestine between its indigenous people and the Zionist invaders and even gave those aliens 56% of historical Palestine and left 46% for the Palestinians and internationalized Jerusalem.

Qassam Brigades: “We won’t allow anyone to wipe out resistance”

GAZA, Nov. 29 (PIC)—The Qassam Brigades, the armed wing of Hamas, confirmed that it will not allow the execution of the first stage of the roadmap plan represented in the security stage which stipulates eliminating and disarming the Palestinian resistance.

In a communiqué issued on Thursday, the Brigades stated that in case the plan was implemented it would be considered a declaration of confrontations with the plan executers, adding that it would not be bound by any resolutions taken in the Annapolis conference or what will be followed.

Meanwhile, Israeli Ha’aretz newspaper quoted sources in the Israeli delegation to the Annapolis conference as saying that the American secretary of state Condoleezza Rice had forced PA chief Mahmoud Abbas half an hour before his speech to reach a common formula with Israel.

The newspaper reported that Rice “ordered” Abbas to come out of the trilateral meeting with US president George Bush and Israeli premier Ehud Olmert and then yelled at him asking him to stop his “games” and approve the joint declaration.

GAZA, Nov. 29 (Ma’an)—The military wing of the Popular Resistance Committees, the An-Nasser Salah Addin Brigades claimed responsibility on Thursday for launching homemade projectiles at the Israeli settlements of Kfar Azza and Karmia in the north of Gaza Strip. They said in a statement that the shelling was filmed and that it came in response to the Israeli aggression against the Gaza Strip and that the shelling was part of the campaign “autumn storms” in response to the Annapolis conference.

The Islamic Jihad’s military wing, the Al-Quds Brigades claimed responsibility on Thursday for launching a rocket propelled grenade at an Israeli watch tower, east of Khaza’a city in the southern Gaza Strip, before clashing with Israeli soldiers in the area. They said in a statement that the operation was in response for the ongoing Israeli atrocities against the Palestinian people in the West Bank and Gaza Strip.

A joint armed group of Fatah’s Al-Aqsa Brigades, Islamic Jihad’s Al-Quds Brigades and the military wing of the Popular Front for the Liberation of Palestine (PFLP) claimed responsibility on Wednesday evening for shooting and injuring an Israeli soldier near the Erez crossing. They also said they clashed with Israeli soldiers manning the crossing and released a statement affirming that Israeli criminal acts will not go unpunished.