Add an Event
Newswire
Calendar
Features
Home
Donate
From the Open-Publishing Calendar
From the Open-Publishing Newswire
Indybay Feature
Publish to Newswire
Add an Event
Related Categories: International | Environment & Forest Defense
Scientists say Ocean Acidity Increasing at Faster Rate
by Takver - Sydney Indymedia
Wednesday Oct 17th, 2007 7:44 PM
Ocean acidity is increasing at a much faster pace according to marine scientists meeting in Australia's capital, Canberra, at the Coral Reef Futures 07 Forum, October 18-19, 2007. "It appears this acidification is now taking place over decades, rather than centuries as originally predicted. It is happening even faster in the cooler waters of the Southern Ocean than in the tropics. It is starting to look like a very serious issue." said Professor Malcolm McCulloch of the Centre of Excellence for Coral Reef Studies (CoECRS) and the Australian National University. 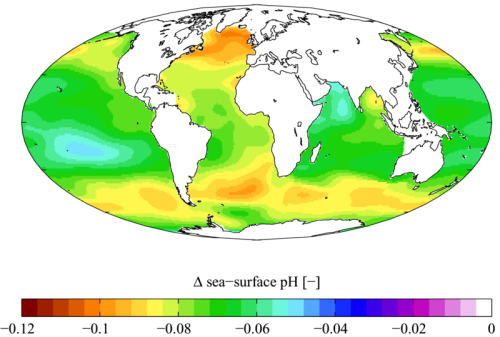 "It isn’t just the coral reefs which are affected – a large part of the plankton in the Southern Ocean, the coccolithophorids, are also affected. These drive ocean productivity and are the base of the food web which supports krill, whales, tuna and our fisheries. They also play a vital role in removing carbon dioxide from the atmosphere, which could break down." said Professor Ove Hoegh-Guldberg of CoECRS and the University of Queensland.

Ocean acidification is caused by the oceans dissolving excess carbon dioxide from the atmosphere. The levels of carbon dioxide in the atmosphere are still increasing due to human activity such as the burning of fossil fuels in particular over the last 100 years. Atmospheric CO2 levels are presently 385 ppm, up from 305 in 1960. The dissolved carbon dioxide forms carbonic acid which eats away the chalky skeletons of corals and other marine organisms at the base of the marine food web, which make up more than a third of the planet’s marine life. Corals and marine organisms provide much of the Earth’s breathable oxygen.

"Recent research into corals using boron isotopes indicates the ocean has become about one third of a pH unit more acid over the past fifty years. This is still early days for the research, and the trend is not uniform, but it certainly looks as if marine acidity is building up," says Professor Malcolm McCulloch.

"Analysis of coral cores shows a steady drop in calcification over the last 20 years," says Professor Hoegh-Guldberg. "There’s not much debate about how it happens: put more CO2 into the air above and it dissolves into the oceans. When CO2 levels in the atmosphere reach about 500 parts per million, you put calcification out of business in the oceans."

An experiment at Heron Island on the Great Barrier Reef, in which CO2 levels were increased in the air of tanks containing corals, had showed it caused some corals to cease forming skeletons. More alarmingly, red calcareous algae – the ‘glue’ that holds the edges of coral reefs together in turbulent water – actually began to dissolve, according to Professor Hoegh-Guldberg. "The risk is that this may begin to erode the Barrier of the Great Barrier Reef at a grand scale," he said.

"As an issue it’s a bit of a sleeper. Global warming is incredibly serious, but ocean acidification could be even more so." concluded Professor Hoegh-Guldberg.

According to the media release Australia’s coral reefs contributes substantially to the economy of Australia. Tourism on the Great Barrier Reef alone contributes approximately $5 billion annually, with income from recreational and commercial fishing on Australia’s tropical reefs contributing a further $400 million annually. Globally, the welfare of 500 million people is closely linked to the goods and services provided by coral reef biodiversity.

A report in 2005 by the Royal Society (UK), 'Ocean acidification due to increasing atmospheric carbon dioxide', recommended that action needed to be taken immediately to reduce global emissions of CO2 from human activities to the atmosphere to avoid the risk of irreversible damage from ocean acidification, and that a major international research effort be launched into this relatively new area of research.

With coral bleaching and ocean acidification world marine biodiversity is being placed in jeopardy. While this threatens to cost billions of dollars in economic activity, no one has placed a cost on the huge damage to the environmental processes in the carbon cycle and loss of oxygen productive capacity.