Add an Event
Newswire
Calendar
Features
Home
Donate
From the Open-Publishing Calendar
From the Open-Publishing Newswire
Indybay Feature
Publish to Newswire
Add an Event
Related Categories: International | Environment & Forest Defense
Climate Change: Arctic Sea Ice Heading for Rapid Disintegration
by Takver - Sydney Indymedia
Thursday Oct 11th, 2007 8:29 AM
Arctic summer sea ice is headed towards rapid disintegration as early as 2013, a century ahead of the International Panel on Climate Change (IPCC) projections, according to 'the Big Melt' (PDF), a new review of recent scientific literature on climate change produced by www.carbonequity.info. We have gone past the tipping point for Arctic sea ice and now we watch the disintegration of the Greenland and the West Antarctic ice sheets which will result in catastrophic changes in sea level of 5 metres or more in the next 100 years. 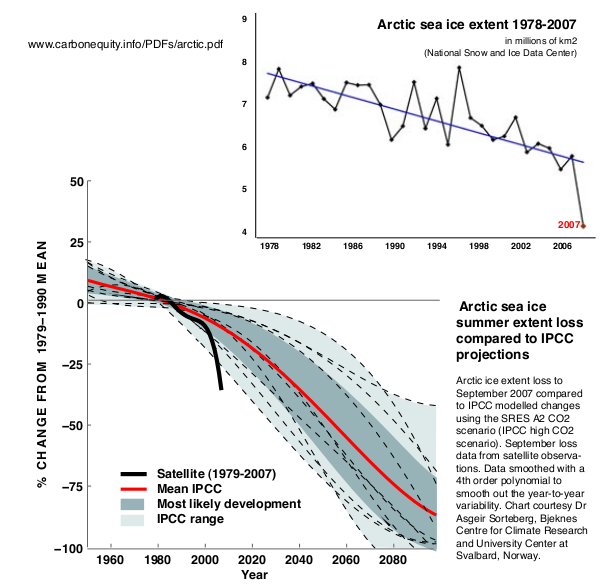 These changes are happening at much lower average temperature rises than predicted. The rapid loss of Arctic sea ice will speed up the disintegration of the Greenland ice sheet. Scientists are still arguing over the impact on the thermo-haline circulation or the Great Ocean Conveyor belt that transports heat in the oceans around the world from the Pacific to the North Atlantic and back. This great current has already slowed by a third by some measurements. The release of vast amounts of fresh water from the Greenland Ice cap may cause the current to stop for a period or produce another climate tipping point that will heavily impact the climate of east coast North America and Northern Europe.

"Every now and then enough fresh water goes into the North Atlantic that it actually stops its circulation," Dr Timothy Burrows said "And when that happens Europe cools dramatically," he said. Dr Burrows, a paleoclimatologist at the Australian National University, made these remarks in an article just published in Science journal detailing that Australia may not be affected as much as northern hemisphere countries if and when the next Ice Age hits. "The way our world works, we actually transport heat from the southern hemisphere into the north, because of this ocean conveyer belt," he said. "And when you stop that, the heat doesn't have anywhere to go and it accumulates in the southern hemisphere." he was reported the Sydney Morning Herald.

The disintegration of the Arctic Sea Ice will also curtail polar bear populations, presently numbering about 22,000. Polar bears rely on sea ice to live and hunt for their prey. Reports prepared for the US Geological Survey and released in September 2007 say that two-thirds the world's polar bears could be threatened with extinction by 2050. If Summer sea ice vanishes on a quicker timetable, so will the polar bear, the largest of the carnivorous mammals.

With the reduction in the sea ice extent, there is increasing activity to explore and later exploit the oil and mineral resources under the arctic sea. One study has estimated that a quarter of the world’s oil and gas reserves might be found in the region, as well as significant deposits of other mineral riches. So the rush is on for claims by the five countries with territory inside the Arctic Circle – Russia, the US, Norway, Denmark and Canada. Use of the Northwest passage for a short route for shipping from the Atlantic to Asia is also in dispute with Canada asserting it has a right to control, regulate and tax shipping. America and the European Union say the passage is an international strait and that all foreign ships have the right of "transit passage." But it will probably be sometime before commercial shipping lines judge the cost benefit is greater than the increased risk.

Carbon dioxide emissions are now growing more rapidly than "business as usual", and at a much greater rate than the more pessimistic forecasts in IPCC scenarios. The US and Australia are still refraining from signing the Kyoto protocol and setting minimal progressive targets for greenhouse gas reduction. At the recent APEC meeting in Sydney a Climate Declaration was signed which only had non-binding aspirational targets.

Sea level rise already affects people such as the Carteret Islanders forced to evacuate their homes. (Listen to them on this video by Pip Starr). On the impact of sea level rise the report states that

"one-quarter of Bangladesh’s population (~35 million people) lives within the coastal floodplain. Many of the world’s major cities (22 of the top 50) are at risk of flooding from coastal surges, including Tokyo, Shanghai, Hong Kong, Mumbai, Calcutta, Karachi, Buenos Aires, St Petersburg, New York, Miami and London. In almost every case, the city relies on costly flood defences for protection. Even if protected, these cities would lie below sea level with a residual risk of flooding like New Orleans today. The homes of tens of millions more people are likely to be affected by flooding from coastal storm surges with rising sea levels. People in South and East Asia will be most vulnerable, along with those living on the coast of Africa and on small islands" (Stern, 2006b). A rise of 5 metres would affect 669 million people and 2 million square kilometres of land of land would be lost (Kahn, 2007)."

Rising sea levels will also impact underground freshwater acquirfers which more than 2 billion people depend on. These acquifers will become contaminated by the salt water producing a crisis in drinking water in cities such as Shanghai, Manila, Jakarta, Bangkok, Kolkata, Mumbai, Karachi, Lagos, Buenos Aires and Lima. "The water supplies of dozens of major cities around the world are at risk from a previously ignored aspect of global warming. Within the next few decades rising sea levels will pollute underground water reserves with salt... Long before the rising tides flood coastal cities, salt water will invade the porous rocks that hold fresh water... The problem will be compounded by sinking water tables due to low rainfall, also caused by climate change, and rising water usage by the world's growing and increasingly urbanised population" (Pearce, 2006a).

If you want to see the impact of sea level rise on coastal geography visit http://flood.firetree.net/ for a Google earth mashup showing what a 1m to 14 m rise in sea level might do.

The IPCC reports, have suffered from a scientific and diplomatic reticence and conservatism which has under-estimated the extent, impact and speed of climate change. The report quotes Barry Pittock, an Australian CSIRO scientist on the limitations of the IPCC process:

"Vested interests harboured by countries heavily reliant on fossil fuels for industry and development, or for export, lead to pressure to remove worst case estimates; scientists... tend to focus on “best estimates”, which they consider most likely, rather than worst cases that may be serious but which have only a small probability of occurrence; many scientists prefer to focus on numerical results from models, and are uncomfortable with estimates based on known but presently unquantified mechanisms; and due to the long (four-year) process of several rounds of drafting and peer and government review, an early cut-off date is set for cited publications" (often a year before the reports appear)."

The report heavily criticise the IPCC process saying "The data surveyed suggests strongly that in many key areas the IPCC process has been so deficient as to be an unreliable and indeed a misleading basis for policy-making." and that "The primary assumptions on which climate policy is based need to be re-interrogated."

"Take just one example: the most fundamental and widely supported tenet — that 2°C represents a reasonable maximum target if we are to avoid dangerous climate change — can no longer be defended. Today at less than a 1°C rise the Arctic sea ice is headed for very rapid disintegration, in all likelihood triggering the irreversible loss of the Greenland ice sheet and catastrophic sea level increases. Many species are on the precipice, climate-change-induced drought or changing monsoon patterns are sweeping every continent, the carbon sinks are losing capacity and the seas are acidifying."

The report urges in the conclusion that "The simple imperative is for us to very rapidly decarbonise the world economy and to put in place the means to draw down the existing excess CO2 levels. We must choose targets and take actions that can actually solve the problem in a timely way. It is too late not to be honest with ourselves and our fellow citizens."

This report does not propose solutions, although elsewhere on carbonequity.info you can find discussion and proposals for carbon rationing, carbon taxes, and links to articles on increasing energy efficiency and renewable energy. What it does advocate is that political leaders need to make the hard decisions now to set binding targets on climate emissions and set in place the essential regulatory framework and infrastructure for a carbon neutral society, and establish a system where atmospheric carbon is reduced to stand a reasonable chance of limiting impacts on society.

If you don't believe we are facing a climate disaster, then read the report, and its extensive scientific references. 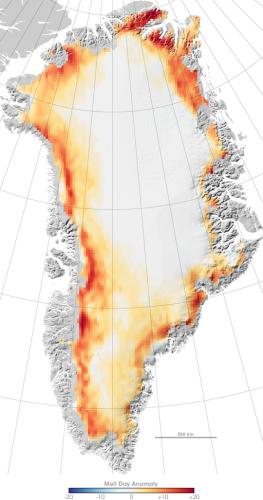 "Dangling below the Arctic Circle, the ice sheet on Greenland is a
vestige of the last ice age. Other ice sheets at its latitude have long
since dwindled away, but the Greenland Ice Sheet persists, preserved
largely because of its own tremendous size. But change is creeping over
the ice sheet: glaciers on its edges are sliding into the Atlantic at an accelerating rate and pools of water
puddle on the surface of the ice as the summer melt lengthens. Piece by
piece, evidence has accumulated to show that the ice sheet is shrinking." 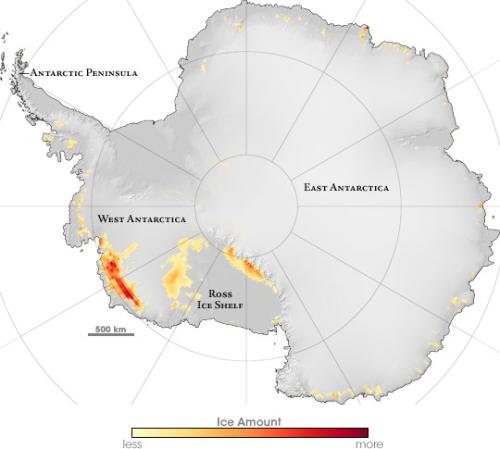 In contrast to the Antarctic Peninsula, where evidence of climate warming has been evident in rising temperatures, retreating glaciers, and collapsing ice shelves, the interior of Antarctica has generally appeared to be staying well below freezing. In May 2007, however, a team of researches from NASA and the University of Colorado found evidence of warming and melting as much as 900 kilometers (500 miles) inland. Just 500 kilometers (310 miles) from the South Pole, and more than 2,000 meters (6,600 feet) above sea level, portions of Antarctica’s interior experienced temperatures above freezing for about a week in January 2005." 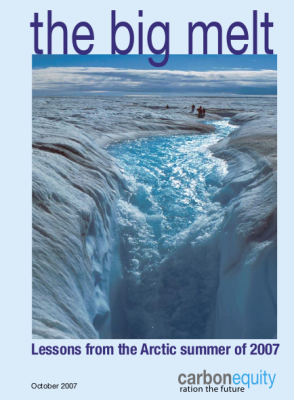 'The Big Melt: Lessons from the Arctic summer of 2007' (PDF), a new review of recent scientific literature on climate change. Published 6 October 2007 by CarbonEquity http://www.carbonequity.info
Add Your Comments
LATEST COMMENTS ABOUT THIS ARTICLE
Listed below are the latest comments about this post.
These comments are submitted anonymously by website visitors.