The official title of the speech is: 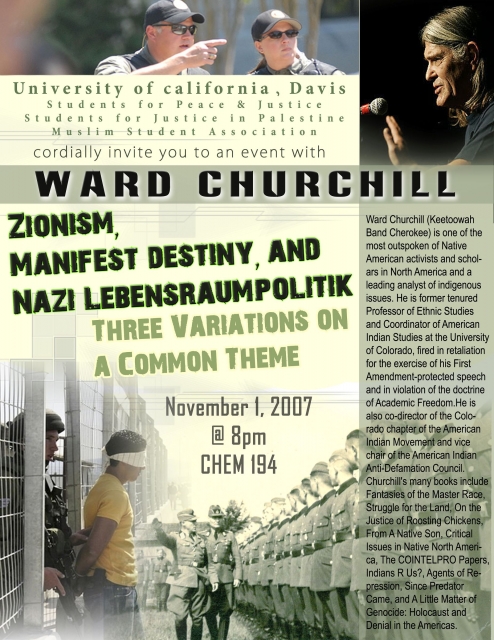 original image (1855x2400)
Ward Churchill (Keetoowah Band Cherokee) is one of the most outspoken of Native American activists and scholars in North America and a leading analyst of indigenous issues. He is former tenured Professor of Ethnic Studies and Coordinator of American Indian Studies at the University of Colorado, fired in retaliation for the exercise of his First Amendment-protected speech and in violation of the doctrine of Academic Freedom.He is also co-director of the Colorado chapter of the American Indian Movement and vice chair of the American Indian Anti-Defamation Council.

Churchill's many books include Fantasies of the Master Race, Struggle for the Land, On the Justice of Roosting Chickens, From A Native Son, Critical Issues in Native North America, The COINTELPRO Papers, Indians R Us?, Agents of Repression, Since Predator Came, and A Little Matter of Genocide: Holocaust and Denial in the Americas.

In his lectures and numerous published works, Churchill explores the themes of genocide in the Americas, racism, historical and legal (re)interpretation of conquest and colonization, environmental destruction of Indian lands, government repression of political movements, literary and cinematic criticism, and indigenist alternatives to the status quo.

Churchill is also a past national spokesperson for the Leonard Peltier Defense Committee, has served as a delegate to the United Nations Working Group on Indigenous Populations (as a Justice/Rapporteur for the for the 1993 International People's Tribunal on the Rights of Indigenous Hawaiians), and as an advocate/prosecutor of the First Nations International Tribunal for the Chiefs of Ontario.


"I have found [Churchill's writings on native American history] to be assiduously researched, making important contributions to a much-neglected part of this nation's history."
— Howard Zinn, author of A People's History of the United States


"Ward Churchill...defends the rights of oppressed people, and exposes the dark side of past and current history…These are achievements of inestimable value."
— Noam Chomsky, author and activist

"Without reservations, I support Churchill’s right to free speech and academic freedom, and regard the attack on him as scurrilous - and by now craven cowardice as well, as the state authorities and other critics pretend that the issue is (suddenly) his academic credentials and ethnic origins. That’s a real disgrace." - Noam Chomsky
Add Your Comments
LATEST COMMENTS ABOUT THIS ARTICLE
Listed below are the latest comments about this post.
These comments are submitted anonymously by website visitors.