Add an Event
Newswire
Calendar
Features
Home
Donate
From the Open-Publishing Calendar
From the Open-Publishing Newswire
Indybay Feature
Publish to Newswire
Add an Event
Related Categories: U.S. | Anti-War
9/11 Truth Protesters Disrupt Fox News Programing
by redpill8
Sunday Sep 9th, 2007 10:46 AM
Media activist and 9/11 truther Alex Jones was arrested after he and and a large group of citizens showed up on Fox News' doorstep and disrupted Geraldo Rivera and his "cookie cooking" news analysis with signs and chants that "9/11 was an inside job!" 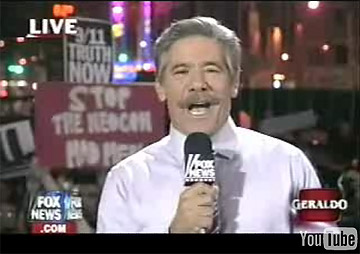 Presstitute Geraldo Rivera, ruffled and indignant, went into macho mode with "I wish I could..." shaking his fist in the air, implying that he would love to just whack one of the protesters. He also starts calling them everything under the book from "anarchists," "misfits," "nutjobs," "rabble," and the "least attractive group of demonstrators I have ever seen." Ouch! Now that really hurts! (I guess we can't compete with Kyla and the Fox News staff with their little white mini skirts and hooter tops).

Here Geraldo calls the demonstrators everything except what they really are -- citizens who want to get their censored message out.

He even says in one clip that the demonstrators are a "activist radical communist group. I don't know who they are." Geraldo, if you are a real journalist wouldn't it be incumbent for you to bring the microphone out in the crowd and ask them who they are?

Later, after the police come to arrest Alex, Geraldo ask Hooters' waitress Kyla Ebbert (who was escorted off of a Southwest plane for her "provocative" outfit) how she likes New York.

Kyla, "I think I will come back when things calm down in in a few years."

Geraldo "I am not sure of that."

That's right Geraldo, that is the one thing you got right that night. We won't be calm or quiet.

http://redpill8.blogspot.com
Add Your Comments
LATEST COMMENTS ABOUT THIS ARTICLE
Listed below are the latest comments about this post.
These comments are submitted anonymously by website visitors.