Add an Event
Newswire
Calendar
Features
Home
Donate
From the Open-Publishing Calendar
From the Open-Publishing Newswire
Indybay Feature
Publish to Newswire
Add an Event
Related Categories: California | Police State & Prisons
Unethical charity: California Organization of Police and Sheriffs (COPS)
by cp
Thursday Jul 12th, 2007 11:48 AM
After months of getting calls from the California Organization of Police and Sheriffs (COPS) insisting that I need to send them money for a pledge I never made, I finally looked up information about the group at the charities database run by the California state Attorney General's office. Commercial charities have recently been required by law to file general accounting documentation, stating their total revenue and the fraction that goes towards the charitable purpose. 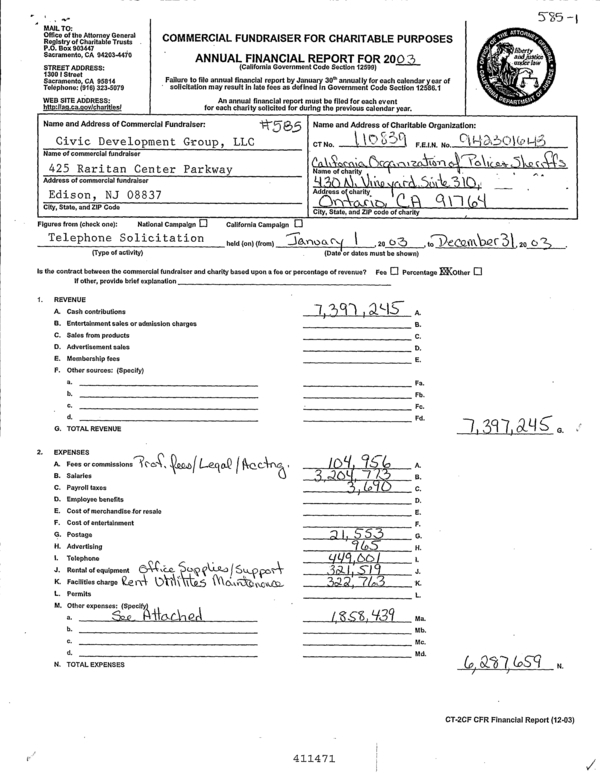 Download PDF (158.0KB)
COPS does fairly poorly, seeming to keep about 85% of revenue for salaries and overhead of their organization, making them essentially a marketing group soliciting donations for themselves.
Last fall someone from this organization called asking for money. I didn't want to make a donation, but instead I politely tried to evade by saying it would be okay to send out a pamphlet, given that they already knew my home address. Instead, the telemarketer wrote down that I had made a pledge, and also kept pressing for a credit card number over the phone.
Many people I've spoken to have also received calls from this organization, and a common perception is that police or firefighters themselves are sitting in the local station making these calls for money. The marketing dialogue and tone of voice is designed to make it sound like these are actual police. An elderly relative of mine who grew up in germany during the nazi era is particularly threatened by these calls, because she can't get around the feeling that local authorities are developing a list of those who don't donate. A quick online search reveals that the organization is targeting latino last-name households and making insidious false threats that their phone line could be cut off: http://sfgate.com/cgi-bin/article.cgi?f=/c/a/2002/10/09/BA142545.DTL

Here are several fundraising summaries from the past several years showing a very small amount actually given to the stated charity. It is recommended that you hang up on this group calling from New Jersey as soon as they start to deliver their pitch