“Before I left for Iraq I searched deep within me, I concluded that if I go over there I can’t take a life. I ultimately say I’ll go, but I’m definitely a conscientious objector. I’m not willing to cross that line, no matter what I can’t take a life.” Two years later, after his application for discharge was a conscientious objector was denied by the Pentagon, Army Spc. Agustin Aguayo went AWOL in order to resist redeploying to Iraq. 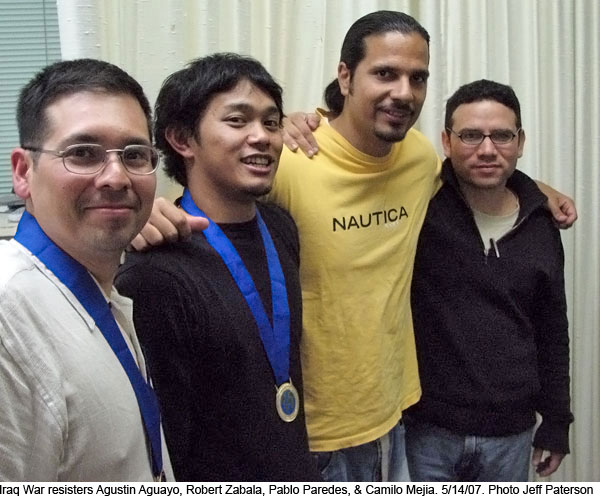 Last Thursday, Courage to Resist supporters joined his wife Helga at the Sacramento airport to welcome Agustin home from a U.S. military prison in Germany where he was held for eight months as a prison of conscience for his unjust conviction for desertion.

Since then, Agustin has shared his story of resistance at community gatherings in Sacramento, Carmel, and San Francisco. Highlights of Agustin’s first week as an anti-war activist also included presentations to day labors, farm workers, and their families in Stockton, and high school and college students in Watsonville.

At the Mexican Community Center in Stockton, Agustin joined community members in brainstorming about ways to counter the influence of military recruiters among immigrant communities in California’s Central Valley.

In Carmel, Agustin was joined by fellow Iraq War resisters Camilo Mejia and Pablo Paredes at the local Unitarian Church. Students from nearby Hartnell Community College raised hundreds of dollars for these resisters with a bake sale for peace.

In San Francisco, with the help of Veterans for Peace and Codepink, a hundred supporters packed a large meeting room in the Veterans War Memorial Building to hear these courageous resisters.

Earlier in the day, these war resisters were joined by Iraq veteran Sean O’Neill at a large Mother’s Day ceremony and press conference to declare the San Francisco Unitarian Church a peace church. Agustin was joined by California State Assemblyman Mark Leno in urging the congregation to support war resisters.

The resisters also introduced screenings of the documentary film “The Short Life of José Antonio Gutiérrez” at a theater in the heart of San Francisco’s Mission District. Marine Lance Cpl. Gutiérrez was a Guatemalan immigrant, a “Green Card” soldier, and was the first US casualty of the Iraq War.

In Watsonville, recently discharged Marine conscientious objector Robert Zabala joined Camilo, Pablo, and Agustin in speaking to over a 130 people at the United Presbyterian Church. With half of the audience being students, there was no shortage of questions about the realities of military life and the Iraq occupation. Robert made national news last month when a federal judge ordered his release from the Marines as a conscientious objector, despite the military denial of his claims. Courage to Resist organizer and 1991 Gulf War military resister Jeff Paterson presented Robert and Agustin with gold-plated “Courage to Resist” medals for bravery in the name of peace.

For International Conscientious Objector Day on Tuesday, May 15, Agustin joined Berkeley city council member Kriss Worthington in hoisting a peace flag in front of the Berkeley City Hall by proclamation of the city council and mayor.

“My time in prison was a time of deep reflection. I felt completely free there, as free as I had not been in so long. I was able to share my experience with others, and that brought me a sense of joy. It was also painful, since I was separated from my wife, but this was something I was willing to pay or something I was willing to do in order for me to save my sanity and not go against my conscience.”

Now at home, Agustin is preparing for the birthday of his twin 11-year-old daughters tomorrow. A welcome home celebration is being organized for June 1 in Los Angeles. Stay in touch for details coming soon.
http://www.couragetoresist.org
§Support the troops who refuse to fight!
by Jeff Paterson, Courage to Resist Friday May 18th, 2007 6:21 PM 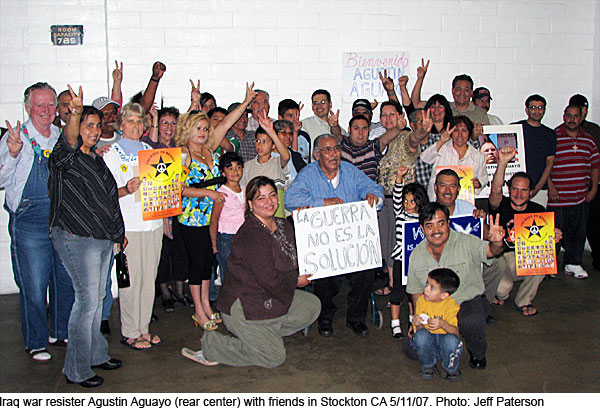 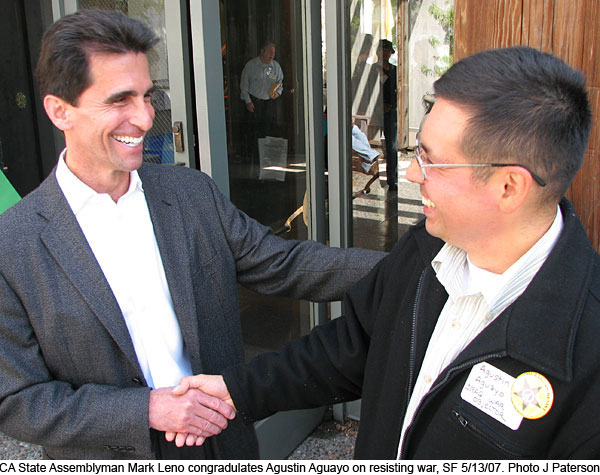 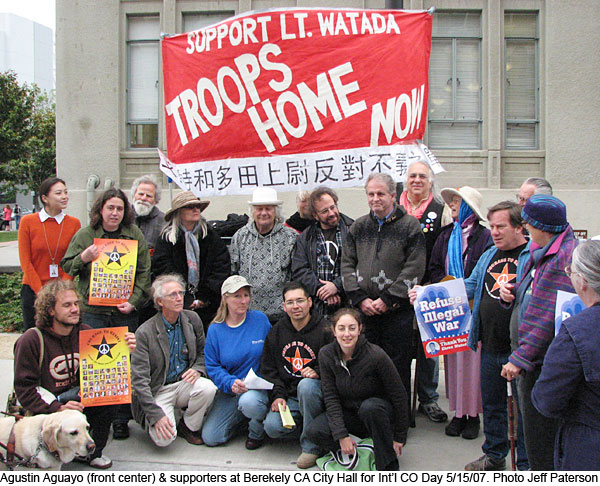 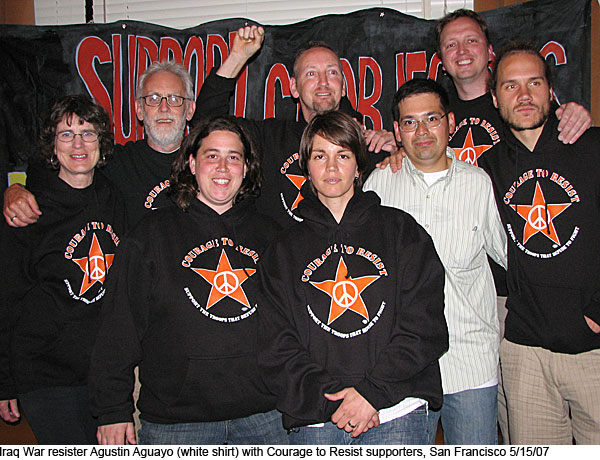 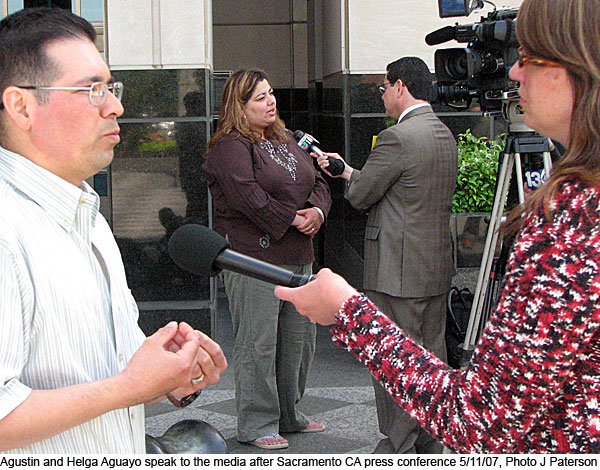 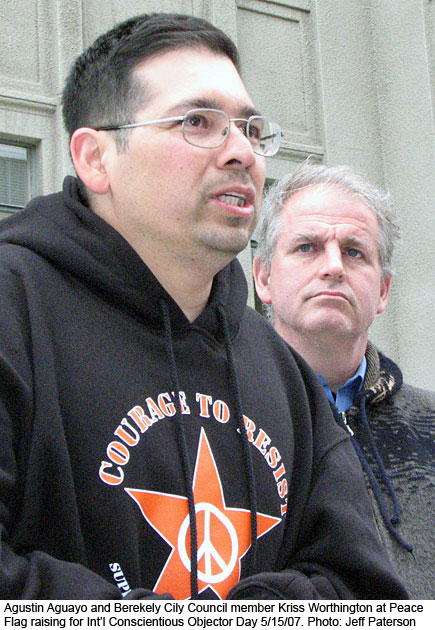 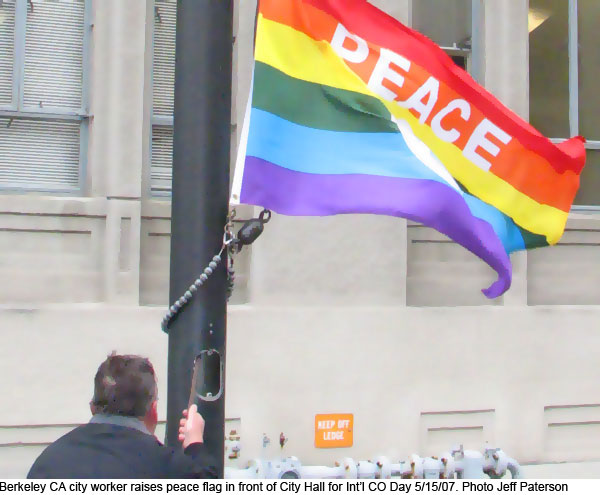 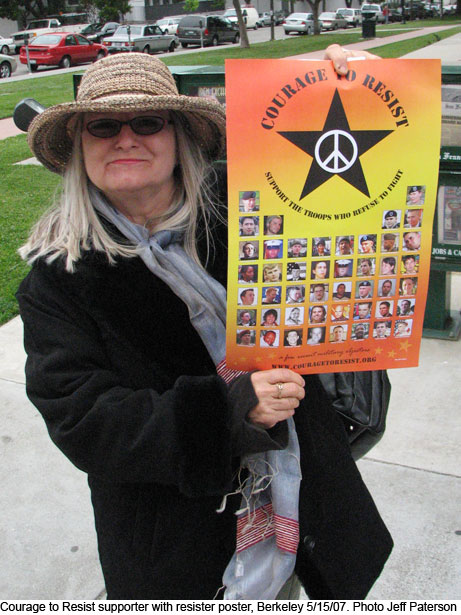 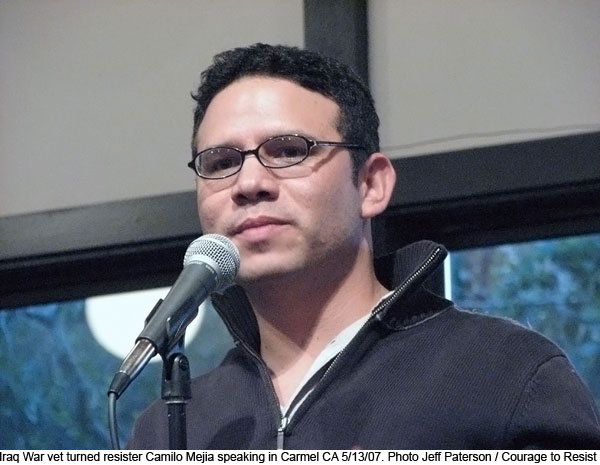 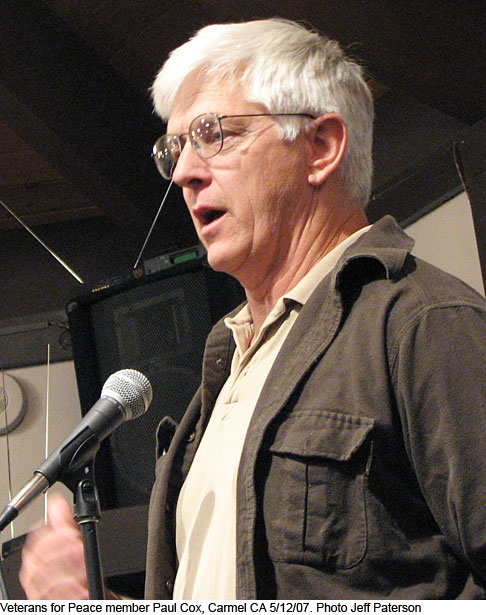 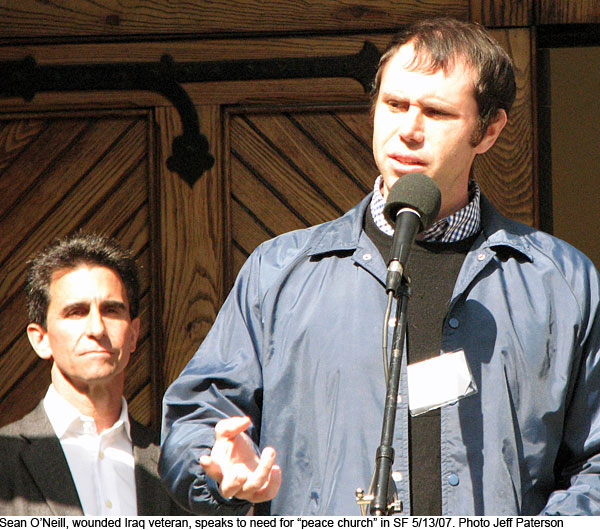 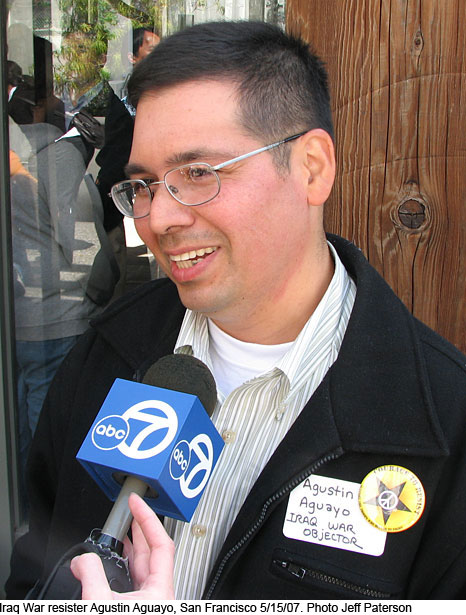 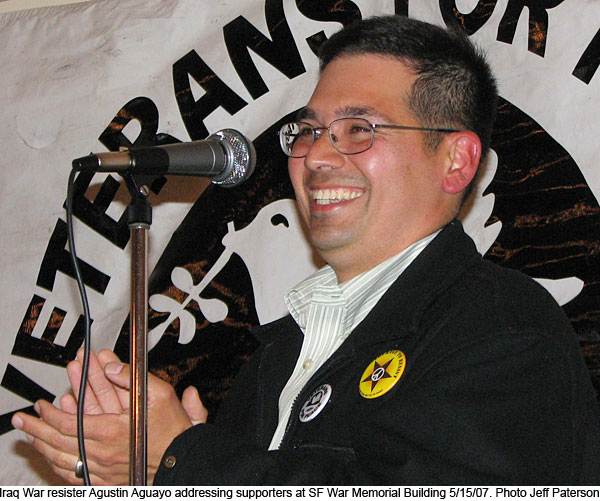 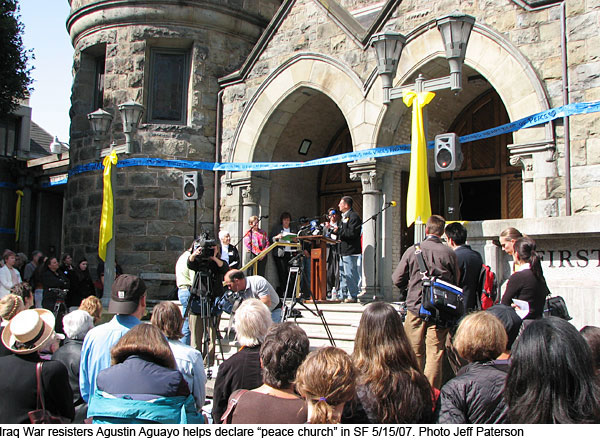 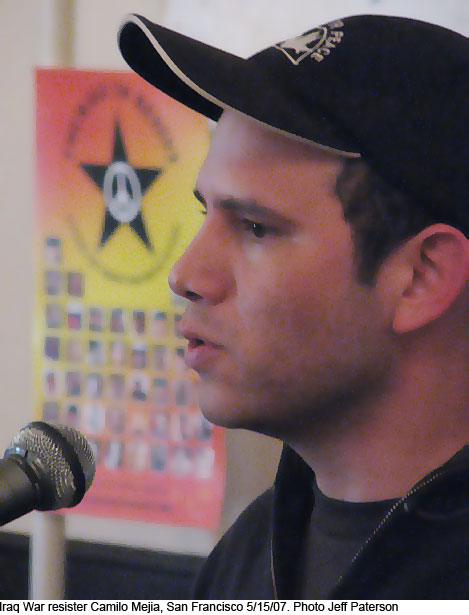 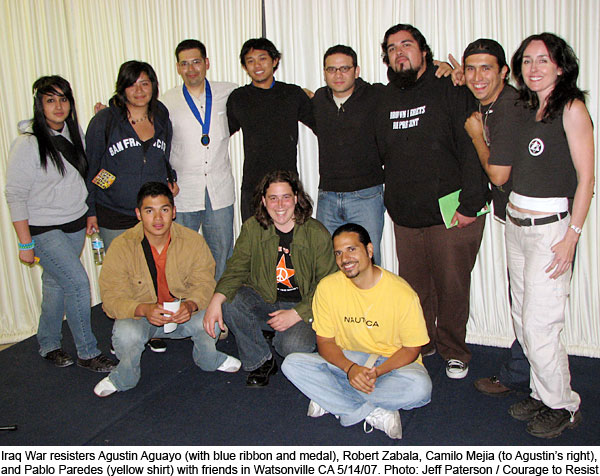