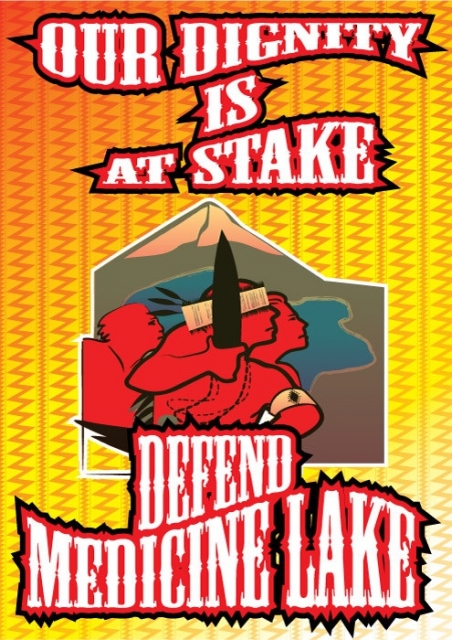 Indigenous peoples everywhere are on the front lines --where most of the worlds last remaining resources are. It is more critical than ever to bring environmental justice by protecting sacred sites, defending human rights and indigenous culture by showing support and standing with First Nations peoples who are exercising their inherent rights to protect their sacred homelands like Medicine Lake from multi-national energy corporations wreaking havoc on the earth and placing profits before people, such as Calpine Energy Corporation is doing.


Advocates for the Protection of Sacred Sites

S.F., CA–On 2/21/07 the US Department of Justice (DOJ), acting on behalf of the Bureau of Land Management (BLM) and the Forest Service (FS), requested that the 9th Circuit Court review the issues involving the proposed plans to build geothermal power plants in the Medicine Lake Highlands, a mountainous region held sacred to many Native Nations. In November 2006, a panel of the 9th Circuit unanimously ruled that the agencies not only violated the cultural rights of the Pit River Nation but also failed to uphold provisions of the National Environmental Protection and National Historic Preservation Acts. In their ruling the Court of Appeals found that the above Federal Agencies had never adequately considered whether the Highlands should be developed for energy at all. As a result, the Court rejected the leases that would have allowed Calpine Energy Company to build geothermal plants.

With DOJ's recent request to the 9th Circuit Court, the department may try to claim that the issue brought by the tribal government and supported by a panel of the 9 th Circuit is irrelevant. They may argue that the Native peoples who traditionally use the Highlands did not protest a new 40-year lease agreement that superseded the previous lease agreement.

In the 1980s, BLM decided to lease the Highlands for geothermal development, but did not go through the required tribal government consultation process mandated by U.S. law. Pit River, Modoc, Wintu and other Native peoples have been opposing these plans ever since they learned that their holy place would be violated. From a Native rights perspective, Medicine Lake Highlands is essential to the free exercise of Tribal religious beliefs and the encroachment of the proposed electrical power generating plant, represents a gross infringement of their constitutional and civil liberties. Native Peoples have never endorsed energy development in this pristine and sacred region nor will they ever. In fact, as far back as June 5, 1970, the late Mickey Gemmill, a distinguished cultural leader of the Pit River Nation issued a "Proclamation: To the President of the United States and the American People" that stated "We are the rightful and legal owner of the land. No amount of money can buy the Mother Earth; therefore, the California Indian Land Claims Commission has no meaning. The Earth is our Mother and we cannot sell her." From this statement it is clear that the Native peoples that hold the Highlands sacrosanct would never support the pollution and money generating plans of the federal government and energy companies that would cause irreversible damage to the sacred and natural Medicine Lake region.

"Clearly, DOJ, BLM, FS, and Calpine energy company are grasping at straws with their latest legal argument to try to open up the Highlands for energy development," said Radley Davis, Co-Chair of the Advocates for the Protection of Sacred Sites.

James Hayward Sr., Co-Chair of the Advocates for the Protection of Sacred Sites, said "If the Creator wanted such development in that area there would not be large amounts of dangerous arsenic and mercury in the ground to contend with. A panel of the 9 th Circuit and a lower court have already spent a great deal of time and other resources reviewing the case and it is time for developers to leave the Highlands alone. "

Mark LeBeau, Co-Chair of the Advocates for the Protection of Sacred Sites, said "The federal government must cease and desist from supporting the building of power plants in the Highlands, stop playing politics and wasting tax payer dollars supporting an energy company bent on desecrating and negatively altering the Highlands. The government must ban such development out of respect for American Indian religious and traditional use rights and to fulfill its fiduciary responsibility to the tribal governments of the area and act in their best interests. In September 2004 President George Bush issued an executive memorandum requiring all federal agencies to respect Native sovereignty, self-determination and the government-to-government relationship as they make decisions; it is time for DOJ, BLM, and FS to abide by the president's order as it relates to Native protection and preservation of the Medicine Lake area."

Over 200 Native peoples, environmental justice allies, and other concerned citizens rallied in front of Calpine Energy Company's Headquarters on 1/29/07 in San Jose. Native nation representatives handed Calpine a Notice of Eviction from the Highlands. On 2/20/07 Natives, environmentalists, and other concerned citizens rallied outside the Alturas BLM and FS Field Office to demand the agencies not seek another review of the case involving Medicine Lake by the 9 th Circuit. The agencies have moved forward and therefore so have we: please join us in protesting DOJ at 450 Golden Gate Avenue, San Francisco, CA on April 6, 2007 from high noon to 2:00 p.m.

http://sacredsite.blogspot.com/
Add Your Comments
Support Independent Media
We are 100% volunteer and depend on your participation to sustain our efforts!