Add an Event
Newswire
Calendar
Features
Home
Donate
From the Open-Publishing Calendar
From the Open-Publishing Newswire
Indybay Feature
Publish to Newswire
Add an Event
Related Categories: Santa Cruz Indymedia | Anti-War
Democrats Including Sam Farr Vote To Fund The War, Response by Howard Zinn
by Posted by Steven Argue
Tuesday Mar 27th, 2007 9:19 AM
"Ironically, and shockingly, the same bill appropriates $124 billion in
more funds to carry the war. It's as if, before the Civil War,
abolitionists agreed to postpone the emancipation of the slaves for a year, or two years, or five years, and coupled this with an appropriation of funds to enforce the Fugitive Slave Act." Howard Zinn 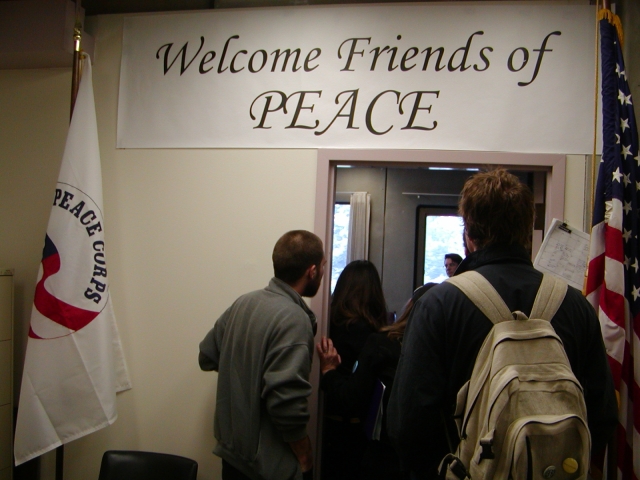 original image (1600x1200)
(Picture banner put up by Sam Farr's office in response to protest against his voting for military funding for the war.)

Sam Farr who has been the target of protest in the Santa Cruz area for
his support for general war funding also voted for funding the war this
time.

While Liberation News does not support any Democrats or Republicans on the principle that they are both capitalist and imperialist parties,
including the few Democrats that are mentioned that voted against funding the war, I thought that the following article was a good one in
explaining that voting for the latest Iraq bill was a vote for war.


Published on Saturday, March 24, 2007
by The Progressive

Are We Politicians or Citizens?

As I write this, Congress is debating timetables for withdrawal from
Iraq. In response to the Bush Administration's "surge" of troops, and the Republicans' refusal to limit our occupation, the Democrats are
behaving with their customary timidity, proposing withdrawal, but only after a year, or eighteen months. And it seems they expect the anti-war movement to support them.

That was suggested in a recent message from MoveOn, which polled its
members on the Democrat proposal, saying that progressives in Congress, "like many of us, don't think the bill goes far enough, but see it as the first concrete step to ending the war."

Ironically, and shockingly, the same bill appropriates $124 billion in
more funds to carry the war. It's as if, before the Civil War,
abolitionists agreed to postpone the emancipation of the slaves for a year, or two years, or five years, and coupled this with an appropriation of funds to enforce the Fugitive Slave Act.

When a social movement adopts the compromises of legislators, it has
forgotten its role, which is to push and challenge the politicians, not
to fall in meekly behind them.

We who protest the war are not politicians. We are citizens. Whatever
politicians may do, let them first feel the full force of citizens who
speak for what is right, not for what is winnable, in a shamefully
timorous Congress.

Timetables for withdrawal are not only morally reprehensible in the
case of a brutal occupation (would you give a thug who invaded your house,
smashed everything in sight, and terrorized your children a timetable
for withdrawal?) but logically nonsensical. If our troops are preventing
civil war, helping people, controlling violence, then why withdraw at
all? If they are in fact doing the opposite -- provoking civil war,
hurting people, perpetuating violence -- they should withdraw as quickly as
ships and planes can carry them home.

It is four years since the United States invaded Iraq with a ferocious
bombardment, with "shock and awe." That is enough time to decide if the
presence of our troops is making the lives of the Iraqis better or
worse. The evidence is overwhelming. Since the invasion, hundreds of
thousands of Iraqis have died, and, according to the UN High Commissioner for
Refugees, about two million Iraqis have left the country, and an almost
equal number are internal
refugees, forced out of their homes, seeking shelter elsewhere in the
country.

Yes, Saddam Hussein was a brutal tyrant. But his capture and death have
not made the lives of Iraqis better, as the U.S. occupation has created
chaos: no clean water, rising rates of hunger, 50 percent unemployment,
shortages of food, electricity, and fuel, a rise in child malnutrition
and infant deaths. Has the U.S. presence diminished violence? On the
contrary, by January 2007 the number of insurgent attacks has increased
dramatically to 180 a day.

The response of the Bush Administration to four years of failure is to
send more troops. To add more troops matches the definition of
fanaticism: If you find you're going in the wrong direction, redouble your
speed. It reminds me of the physician in Europe in the early nineteenth
century who decided that bloodletting would cure pneumonia. When that
didn't work, he concluded that not enough blood had been let.

The Congressional Democrats' proposal is to give more funds to the war,
and to set a timetable that will let the bloodletting go on for another
year or more. It is necessary, they say, to compromise, and some
anti-war people have been willing to go along. However, it is one thing to
compromise when you are immediately given part of what you are demanding,
if that can then be a springboard for getting more in the future. That
is the situation described in the recent movie The Wind That Shakes The
Barley, in which the Irish rebels against British rule are given a
compromise solution -- to have part of Ireland free, as the Irish Free
State. In the movie, Irish brother fights against brother over whether to
accept this compromise. But at least the acceptance of that compromise,
however short of justice, created the Irish Free State. The withdrawal
timetable proposed by the Democrats gets nothing tangible, only a
promise, and leaves the fulfilment of that promise in the hands of the Bush
Administration.

There have been similar dilemmas for the labor movement. Indeed, it is
a common occurrence that unions, fighting for a new contract, must
decide if they will accept an offer that gives them only part of what they
have demanded. It's always a difficult decision, but in almost all
cases, whether the compromise can be considered a victory or a defeat, the
workers have been given some thing palpable, improving their condition
to some degree. If they were offered only a promise of something in the
future, while continuing an unbearable situation
in the present, it would not be considered a compromise, but a sellout.
A union leader who said, "Take this, it's the best we can get' (which
is what the MoveOn people are saying about the Democrats' resolution)
would be hooted off the platform.

I am reminded of the situation at the 1964 Democratic National
Convention in Atlantic City, when the black delegation from Mississippi asked
to be seated, to represent the 40 percent black population of that
state. They were offered a "compromise" -- two nonvoting seats. "This is
tthe best we can get," some black leaders said. The Mississippians, led by
Fannie Lou Hamer and Bob Moses,
turned it down, and thus held on to their fighting spirit, which later
brought them what they had asked for. That mantra -- "the best we can
get" -- is a recipe for corruption.

It is not easy, in the corrupting atmosphere of Washington, D.C., to
hold on firmly to the truth, to resist the temptation of capitulation
that presents itself as compromise. A few manage to do so. I think of
Barbara Lee, the one person in the House of Representatives who, in the
hysterical atmosphere of the days following 9/11, voted against the
resolution authorizing Bush to invade Afghanistan. Today, she is one of the
few who refuse to fund the Iraq War, insist on a prompt end to the war,
reject the dishonesty of a false compromise.

Except for the rare few, like Barbara Lee, Maxine Waters, Lynn Woolsey,
and John Lewis, our representatives are politicians, and will surrender
their integrity, claiming to be "realistic."

We are not politicians, but citizens. We have no office to hold on to,
only our consciences, which insist on telling the truth. That, history
suggests, is the most realistic thing a citizen can do.

Howard Zinn is the author, most recently, of "Power Governments
Cannot Suppress."