Add an Event
Newswire
Calendar
Features
Home
Donate
From the Open-Publishing Calendar
From the Open-Publishing Newswire
Indybay Feature
Publish to Newswire
Add an Event
Related Categories: U.S. | Anti-War
Mistrial for war resister Ehren Watada
by Ryan
Wednesday Feb 7th, 2007 11:56 PM
As the fifth helicopter in less than three weeks was shot down in Iraq, killing all seven passengers, a U.S. military officer who refused to deploy to Iraq's court martial ended in a mistrial today. Lt. Ehren Watada will come before a judge again on March 19th. 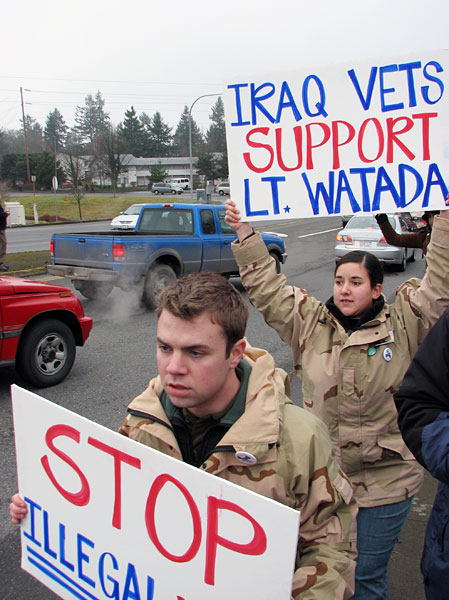 The mistrial was declared by Lt. Col. John Head, the military judge presiding over the case, after a Statement of Intent written by the prosecution and signed by Lt. Watada was disputed. According to Watada's defense, the statement admits that Watada did purposely refuse to board his bus and plane to return to Iraq, but does not say that there was criminal intent and thus does not imply guilt in the charge of missing a movement. The judge argued that the statement was an admission of guilt in general and stated Watada had criminal intent. Both the defense and prosecution disputed the implications of the statement of intent, believing Watada had the right to testify and did not admit guilt. After several long recesses for both sides, the mistrial was declared.

According to Watada's lawyer the statement says what Watada did, not what his intent was. He is not denying his actions but is arguing his right to refuse illegal orders as an officer of the U.S. Military. Watada was to take the stand today to testify and argue his case but he never did. The jury was only brought in to the courtroom to be dismissed.

"The judge was obviously biased and trying to push the government's case" says Kelly Dougherty, an Iraq combat veteran and the national director of Iraq Veterans Against the War. "he didn't want Watada to testify because he doesn't want to put the war on trial". According to Kelly, the judge wanted to hear certain answers and declared a mistrial after he didn't get them. She echoed one of Watada's attorney's that this was "another example of the government trying to prosecute someone for political statements but not allowing them to talk about the statements or why they were made."

The prosecution also called three witnesses yesterday to testify that Watada was guilty of "making statements unbecoming of an officer." In a surprise turn-around, all three witnesses --two Lt. Colonels and a retired military officer and West Point professor-- testified that if an officer is given an illegal order, or an order the officer believes to be illegal, they have the right and duty to refuse it. The witnesses also agreed that an officer has the right to refuse orders that they find morally or ethically wrong. The two Lt. Colonels also testified that Watada's public statements did not negatively effect his unit, the Officer Corps or the U.S. Military.

Watada stated in a January 2006 letter to his battalion commander that we would not be deploying to an illegal war in Iraq and his subsequent appeal was denied. Though it was suggested, Watada was never ordered to keep his case private and went through all the suggested channels before going public through the public affairs office at Ft. Lewis.

Lt. Watada's civilian lawyer Eric Seitz said, 'The mistrial is very likely to have the consequence of ending this case because double jeopardy may prevent the government from proceeding with a retrial.' If the Army proceeds with another trial, Seitz said he would seek dismissal of the charges.

In another turn of events on Tuesday, an anti-war soldier stationed at Ft. Lewis was punished for attending the Court Martial. Suzanne Swift was stripped of her privilege to wear civilian clothes and was ordered to turn all of them in. She is now only to wear her uniform or face further punishment. In uniform, Suzanne is not allowed to attend demonstrations or make public statements that might question the war or the president.

Last year, Suzanne made it public that her commanding officers and raped and sexually assaulted her during her tour of duty in Iraq. She went AWOL after her case was denied and she received redeployment orders. She but was arrested and forced back into the military, where she is still stationed at Ft. Lewis. Suzanne was not legally allowed to perform an interview.

Ehren Watada is not alone. There are several other cases pending against anti-war AWOL soldiers.

Mark Wilkerson is an IVAW member and an army specialist. He faces a court martial on February 22nd at Ft. Hood, TX. Mark enlisted as a military police officer and did a one-year tour of Iraq. After returning home he filed for CO status but was denied. When his unit redeployed he went AWOL, living for a year and a half before turning himself in. Charged with desertion and missing a movement, he entered a plea bargain and plead guilty to reduce his possible sentence to 10 months.

Agustín Aguayo, an IVAW member, husband and father of twin 10-year old daughters, is facing 7 years at a court martial on March 6th in Germany. Agustín served as a medic in Iraq for one year but refused to load his weapon. He filed for CO status while in Iraq but it was denied. After his unit was scheduled to be redeployed, Agustín made it known that he would not return and turned himself in to be court martialed. A day before his unit's re-deployment, two MPs came to his home and told him he would be re-joining the unit whether he liked it or not, and were prepared to handcuff him and take him away if needed. As the MPs waited, Agustín apprently escaped out of a window and made it off the base, eventually making it back to the United States where he later turned himself in to be court martialed and was sent back to Germany to a military prison.

Up to fifteen members of Iraq Veterans Against the War were able to attend the Ft. Lewis demonstrations and surrounding events. Members of IVAW Deployed, a small group within the IVAW, set up a protest camp on January 4th during the pre-trial hearing against Lt. Watada. Police made them take their camp down on January 10th after the owner of the land, a gas station, asked them to.

While camped out, IVAW Deployed members took a rough poll of the soldiers passing by them on their way in and out of base. "We counted raised fists, peace signs or honks" says Damon Murphy, a Navy veteran who joined up right after 9/11, "I'd say about 70 percent were with us".

Damon spent most of this week shuttling protesters between the entrance of Ft. Lewis and a nearby Park and Ride in IVAW Deployed's school bus. The bus was purchased by veterans and will be used to do tours as well as provide services, like shuttling protesters, at different events. Damon explained to his passengers that the bus would soon run off of veggie/biodisel fuel and would have solar panels to power the electronics inside, not to mention a recording studio setup, DJ tables, computers and a PA system for outdoor speaking events or performances, and that donations would be appreciated. He said he was very satisfied with the money raised and was glad that there was a mutual need met.

Several members of IVAW Deployed are musicians and performed multiple times during the week's rallies and events.

Though the government still has the ability to push the case forward, some groups, such as Courage To Resist, a support group for war resisters and AWOL soldiers, says there is a good chance it could be thrown out altogether and called it a "very likely" an outright victory.

Kelly Dougherty described Wednesday as "a short-term victory with the potential of becoming a broader victory" and added that "we still have to be very careful and not take it as too much of a victory at this time".

Many believe that if Watada is allowed to testify and present his case, it may be very likely that a military court would find the war in Iraq illegal according to international and domestic law. "They want to try him to set an example, the government does not want the war to go on trial. They know if they were allowed to talk about the illegality of the war then Watada would have a good chance of being found not guilty".

http://www.thankyoult.org
Add Your Comments
LATEST COMMENTS ABOUT THIS ARTICLE
Listed below are the latest comments about this post.
These comments are submitted anonymously by website visitors.