Wide-ranging discussion among progressives and Greens in the Mission spurs ideas and cements bonds.
Panelists concur: Put pressure on Pelosi. Impeach Bush or get him to resign. Get the U.S. out of Iraq. Put people before corporations. More: 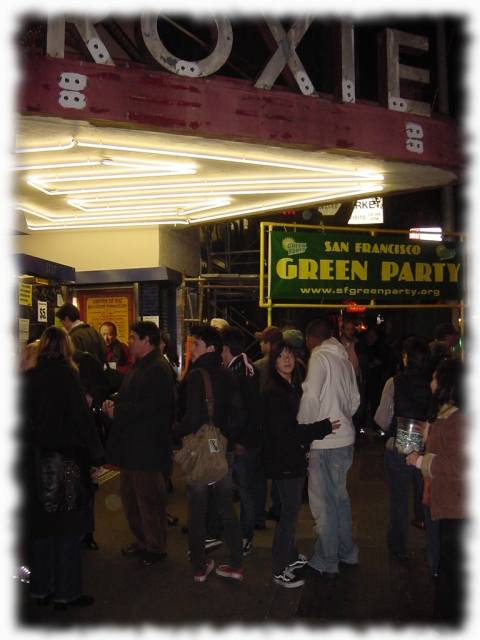 Ralph Nader joined Bay Area Green Party leaders Gayle McLaughlin, Ross Mirkarimi, and Matt Gonzalez this evening in a public forum hosted by the New College of California at the Roxie Cinema in the Mission District of San Francisco. Peter Camejo had been expected to appear, but did not because he was ill. (Other notable Green Party leaders, Todd Chretien, Laura Wells, Forrest Hill and Krissy Keefer, if present, did not participate in the panel discussion).

With a new Democratic Party majority in Washington in mind, past New College President Peter Gabel told the standing-room only audience that the main topic of the discussion would be about how to answer the question "what do Greens have to offer at the present hopeful moment?"

Ralph Nader, aloof from inner Green party politics since 2004, but still identified clearly as the epitome of Green leadership in the eyes of many in the audience, spoke first. His opening words were about how "persistence has become a rare commodity" today and how grateful he is that there are still people who refuse to become demoralized.

Of course, it is Nader himself who has never become demoralized or given up. Looking less haggard and a bit more relaxed than he did in '04 when he had kept a grueling campaign schedule, he lectured the audience this evening on familiar themes: American poverty, war and the Pentagon budget, problems with the media, crises of democracy, and corporate corruption.

If Nader's prime intent this evening was to help "grow the Green Party"-- he wasn't explicit. However, he offered much in the way of practical advice for anyone interested in effecting positive change in the world at this time. "Change doesn't occur unless activity crosses into the political arena," he said, intimating that such activity requires civic motivation and a thick skin. He described how Congress lives "in a bubble," but may yet heed the demands of the grass roots if it puts pressure on it. San Franciscans especially have a good opportunity to pressure their congresswoman, Nancy Pelosi, who is the Speaker of the House of Representatives. "It's not like the Speaker is from Birmingham, Alabama," Nader chided. "She represents San Francisco, the most antiwar city in the nation."

Attorney and popular former San Francisco City Supervisor Matt Gonzalez followed Ralph Nader in addressing the audience. He described how he initially shared the optimism of many who were elated when Democrats seized Congress and the Senate in the November elections. However, he said, the more he got to thinking about it, he came to believe that such aspirations for change where mostly "phony" and "misplaced." He said that too often too many people's opinions drift along with the latest polls. He described the challenge of reinvigorating the Green Party: In 2000 people were excited by it, but by 2004 many people's minds were closed to it. "We need to get people hungry for ideas," he said. He challenged Democrats to stand up for election reform, and asked that they defend third parties that are unfairly discriminated against by election laws.

Ross Mirkarimi, District 5 Supervisor in San Francisco, followed. He expressed his pleasure for being invited, and extolled Green Party victories in the Bay area: in particular, Jane Kim's School Board victory in San Francisco and Gayle McLaughlin's mayoral win in Richmond, California.

He described how being a member of the San Francisco Board of Supervisors is a job he "absolutely" loves, but how being also a member of the Green Party brings with it unique challenges. He confessed that he asks himself, "What is the longevity of the Green Party in a country inhospitable to third parties?" He then described the vagaries of Green Party popularity over the years, which will end, he thinks, if Green Party politicians can point to practical accomplishments-- a branding of sorts that builds confidence from citizens that Greens are to be trusted to respond to their needs constructively. Bringing up an idea that Matt Gonzalez concurred with later, Mirkarimi declared that far many politicians are adept at diffusing conflict by being good listeners and holding lofty meetings-- but fail to actually get anything done for their constituents.

Mirkarimi concluded by saying that he held greater faith in ideas of populism than in progressivism, with the word "progressive" itself becoming a weary label.

Gayle McLaughlin followed, and clearly identified herself as a populist interested in bridging interests through collective action and affirmation of universal identities. She described how meeting Ralph Nader for the first time by sharing the podium with him this evening made this a very "big day" for her. She briefly described how her motive for running for mayor in Richmond, California was not to simply win an election. She said she wanted to do something to empower people around her and actually improve the quality of life in her city. Her goal as mayor, she said, is to bring dis-empowered people in her city together to gain control over their own lives. She described how Chevron (with plants in Richmond) bankrolled her opponents and did everything it could to defeat her. She said she reacted by reaching out to citizens and telling them that "Corporations can't run Richmond. People can run Richmond."

McLaughlin said for the Green Party to become successful, it is not enough that the party's membership grow in numbers-- but that its members grow in the strength of their commitment and solidarity with each other.

Following the panel members' individual addresses, Peter Gabel facilitated persons who wished to ask questions from the audience. Many interesting topics were brought up, and the panel was thoughtful in their attentiveness and generous in with their answers and patience-- rather delightful when in too many public meetings someone runs around with a stopwatch, and those with eccentric specialties get short shrift.

Responses from some of the more notable exchanges between the panelists and the audience:

Ralph Nader described how civic leaders usually start with nothing but a passion to make a difference in their communities. He described a conversation with the Yale University Chaplain and activist, Williams Sloane Coffin shortly before he passed away. He asked Coffin for advice about invigorating the Peace Movement against the War in Iraq. Coffin told him that it should occupy congressional offices and implement nonviolent civil disobedience. "Nonviolent civil disobedience is uncomfortable," Nader told the audience, "it un-locks whatever is inside."

Ross Mirkirimi described how Public Power is a key issue for San Francisco which repercusses with global energy issues and war in the Middle East.

Matt Gonzalez and Gayle McLaughlin expounded upon Mirkirimi's earlier comments. About the need for Greens to succeed locally, Gayle Mclaughlin commented (paraphrasing), "People often just need to be heard. They don't need a dog and pony show. We need to actually listen. We are social creatures. We need to honor the dialog we bring to one another."

One person in the audience took issue with Ralph Nader's criticism of corporations. She asked, "Do you mean that corporations are essentially evil?"

Nader replied, "If they are not subordinated to human beings they become criminal."

Nader and others expressed a need to start a local "watchdog" group to keep track of Congresswoman Nancy Pelosi to hold her to account for her policies. One person in the audience asked, "Why concentrate on Pelosi?"
Nader answered, "Because Nancy has the power."

One person described their frustration trying to raise money from Greens. Nader laughed: "It's like getting water out of stone. I have had to go to extremes of exhibitionism." He described how Cliff Thornton had told him that his self-run gubernatorial campaign in Connecticut was a success because it raised $25,000. Nader exclaimed, "$25,000! In one of the richest states in the union?"

Other panelists concurred with the need to fund campaigns better. One idea put forward was to open a Green Party office in California with "a full-time office and a full-time staff." Gayle McLaughlin stated that Greens need to keep "pushing for public financing."

Please direct corrections or other observations about this story to the comments section below. 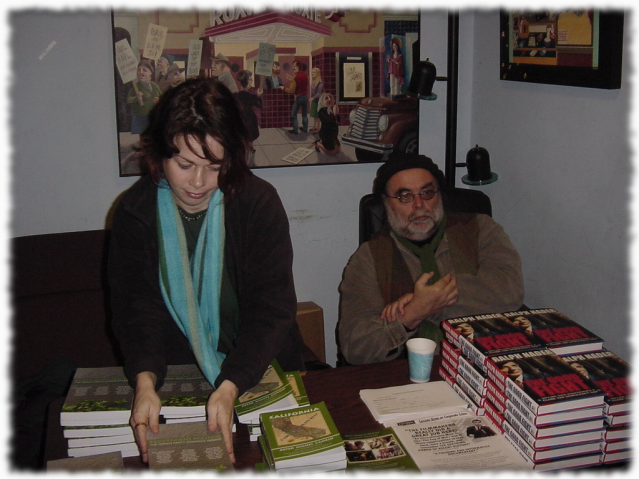 Some books were on sale, including:
Ralph Nader's The Good Fight
and
Peter Camejo's California Under Corporate Rule
§Ross Mirkarimi and Matt Gonzalez
by Robert B. Livingston Friday Dec 29th, 2006 7:49 AM 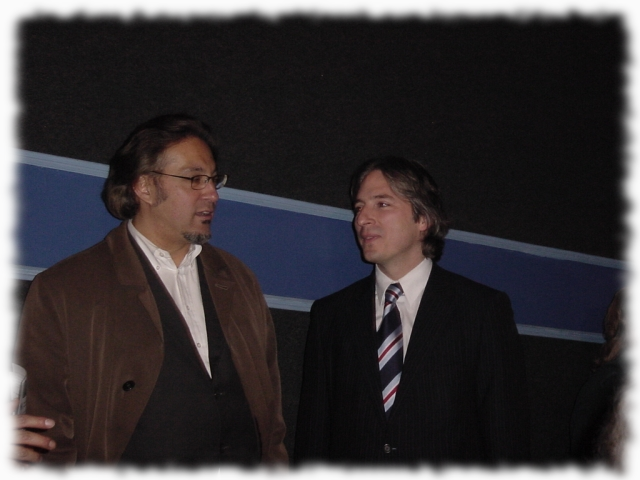 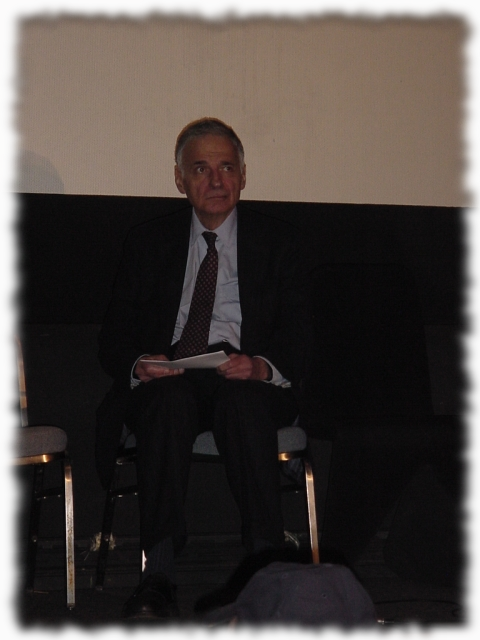 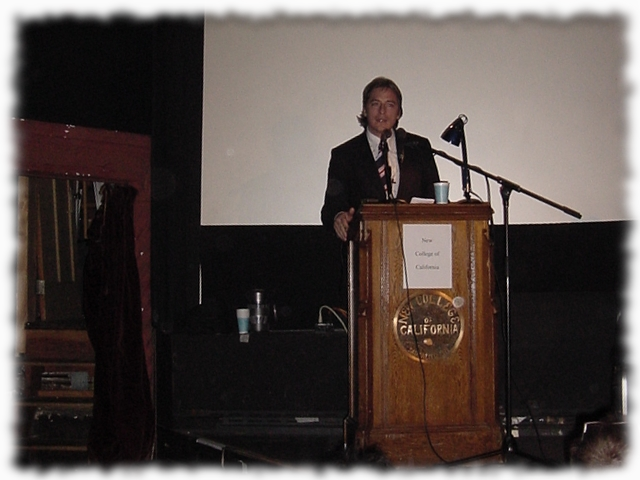 §Rosalynn smiles joyfully after getting her book autographed
by Robert B. Livingston Friday Dec 29th, 2006 7:49 AM 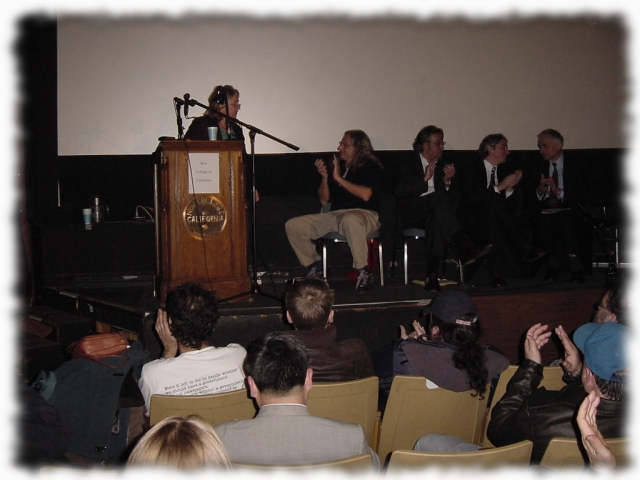 Here is a picture of the participants.

Left to right: Gayle McLaughlin, Peter Gabel, Ross Mirkarimi, Matt Gonzalez, and Ralph Nader.
Add Your Comments
LATEST COMMENTS ABOUT THIS ARTICLE
Listed below are the latest comments about this post.
These comments are submitted anonymously by website visitors.