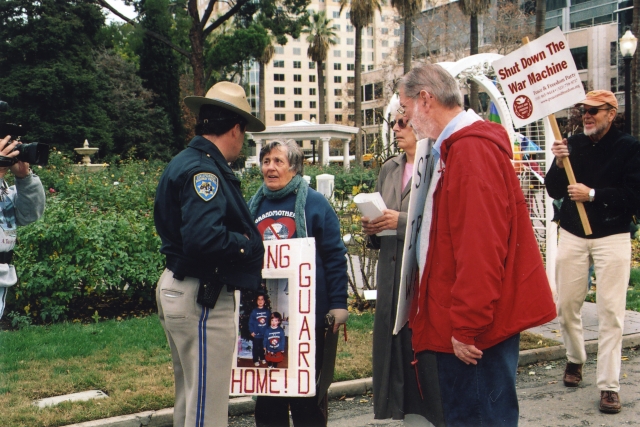 original image (3534x2362)
The Sacramento Catholic Worker House, Grandmothers for Peace and other local peace activists held a rally and march in Sacramento on Friday, December 15 demanding that the California National Guard be withdrawn from Iraq immediately.

After rallying briefly at the Peace Garden at the State Capitol, 10 anti-war activists then marched to the Governor's Office to request a meeting with Arnold Schwarzenegger. Before going through security, California Highway Patrol Officers forced the activists to leave their signs behind, since under the current rules, no signs are allowed in the State Capitol.

The organizers presented a letter to the Governor's staff, signed by the protesters and other supporters, demanding that he ask Bush to bring the troops home from Iraq. However, the staff directed the activists to present the petition to the mailroom - and they refused to comment on the letter or the issue.

“We came here today because we believe that the American public needs to speak out and demand that the U.S. Government bring the troops home,” stated Dan Delaney. “Most of us are senior citizens who are gravely concerned about where our country is going. Our government is wasting our tax dollars on killing Iraqis when 46 million working people in this country go without health care.”

Delaney, a U.S Army Veteran that served two years after the end of the Korean War, emphasized, “Vietnam proved that wars don't work anymore. You can conquer a country, but you can't run it. At the end of World War II, the Germans and Japanese laid down their arms and they did as they were told by U.S. authorities, but nobody has done that ever since.”

Loretta Schmitz of Grandmothers for Peace said the Guard should be at home in California, not in Iraq killing people. “The Guard's mission is to protect us here at home from fires, floods, earthquakes and other disasters. They're supposed to be here - not in Iraq - and that's what people in the Guard signed up for.”

“We are demanding that Governor Schwarzenegger take a public position that now is the time to bring the California National Guard home,” added Dan Delaney. “We want the troops to be withdrawn starting now. Enough is enough. The U.S already has enough blood on its hands.”

Despite the tremendous toll that the war has taken on the California National Guard and the people of Iraq, Governor Schwarzenegger has stood steadfastly behind the Bush regime. The Governor has previously stated that the war in Iraq is “the right thing to do.”

Cindy Sheehan of Gold Star Mothers for Peace, Medea Benjamin of Code
Pink, Gubernational Candidate Phil Angelides, Assemblywoman Loni Hancock and many other political leaders have called for the withdrawal of the California Guard from Iraq.

Unfortunately, AJR36, Hancock's resolution calling upon the Governor to take immediate steps to withdraw California National Guard Troops from Iraq now, failed to pass through the Legislature in 2006.

Some may argue that only the President, not the Governor, has the power to remove State Guard soldiers from a foreign country, but this is simply not true. When the governor of Minnesota refused to allow National Guard members to be sent to Central America for a training mission in 1990, a Supreme Court decision set a precedent recognizing the authority of each Governor over the use of the National Guard for their state.
“In its ruling, the Supreme Court affirmed the right of the federal government to call up National Guard troops - but it also said that governors could refuse a federal request if a deployment would impair its ability to serve or train for emergencies at home,” according to Code Pink.

At least twelve different states have initiatives in progress to petition their Governor to bring home the Guard.

For more information about future actions, call Dan Delaney of the Sacramento Catholic Worker House at 916-447-3785.
Add Your Comments
LATEST COMMENTS ABOUT THIS ARTICLE
Listed below are the latest comments about this post.
These comments are submitted anonymously by website visitors.