Add an Event
Newswire
Calendar
Features
Home
Donate
From the Open-Publishing Calendar
From the Open-Publishing Newswire
Indybay Feature
Publish to Newswire
Add an Event
Related Categories: U.S. | Anti-War
Ray McGovern Warns San Franciscans that U.S. War Against Iran Is Imminent
by Robert B. Livingston (gruaudemais [at] yahoo.com)
Sunday Sep 24th, 2006 9:52 PM
For Ray McGovern, famous for confronting Donald Rumsfeld about the truth, this is not the time to be complacent or neutral. The Bush Regime is evil and deserves our anger and opposition. 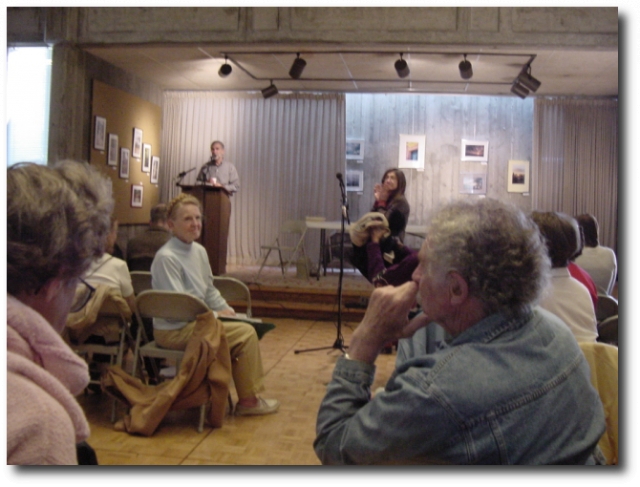 original image (670x510)
Now Is the Time to Be Angry: Ray McGovern Warns San Franciscans that U.S. Aggression Against Iran Is Imminent


Speaking at the First Unitarian Universalist Society of San Francisco this afternoon, political activist and former CIA intelligence analyst Ray McGovern warned his audience that he believes that the Bush administration is eager to bomb Iran before the November election.

Why bomb Iran when most experts, including Director of National Intelligence John Negroponte, say that it may be years before Iran could be capable of making nuclear weapons? McGovern described an administration desperate to protect itself from justice. If Democrats win a majority in Congress impeachment proceedings against the president, for example, could actually proceed (irrespective of Rep. Nancy Pelosi's vow that impeachment is "off the table"). McGovern cited Bush's low popularity poll ratings as a major concern to those advising Bush, and alluded to how the administration hasn't hesitated to use other crises as a convenient way to capitalize on American's propensity to stand behind their government.

McGovern described his background: growing up in the Bronx, a career in the U.S. Army, and then in the CIA-- where he advised presidents on intelligence matters, including George H.W.Bush. He described how neocons like Richard Perle and Paul Wolfowitz were tolerated and humored for years because they cemented loyalty to the Republican Party from extremists and religious zealots (but were universally thought of by serious and patriotic careerists as "the crazies"). He described his growing impatience and anger when they gained real power in the current Bush administration. Citing Gen. Colin Powell's and Condoleeza Rice's own words in February and July of 2001 that Sadaam Hussein was not a threat to the United States, McGovern described how the supreme international crime was committed when the U.S. initiated aggression against Iraq-- on the pretext that the 9/11/01 terror incidents were related, and that Hussein possessed weapons of mass destruction. All lies. McGovern described the accumulated evils that have taken place under this administration's watch: Torture. Kidnapping. Violating the U.S. Constitution. Illegal eavesdropping, spying, on Americans.


Very few Americans (less than 1%, he said) are directly affected by war-- in other words most are apathetic and ill-informed. He blamed the media for this, saying that Americans are not getting real news, accept possibly on the internet. He said Americans need to get angry because, quoting Martin Luther King, Jr. "there is such a thing as too late." McGovern described how when he famously confronted Defense Secretary Donald Rumsfeld about his lies his main inspiration came from recalling the courage of women like Cindy Sheehan, and Medea Benjamin and the ladies of Code Pink. "Women in this country have all the guts," he said. "We don't need good girls like Nancy Pelosi," he said later. "We need strong women like Cindy Sheehan." McGovern noted, bitterly, that today, the last Sunday in September was ordained as Gold Star Mother's Day by Bill Clinton in 1994.

Several times in his address today Mr. McGovern asked searching questions about the individual's responsibility in troubled times. He said that everyone should get involved right away and do whatever they can, harangue one's government representatives that torture, worse, government sanctioned torture is intolerable. He challenged many in the audience several times to camp out at Nancy Pelosi's office in San Francisco to insist that any compromise on this issue is inconceivable: that the United States must abide in spirit and in law with the Geneva Convention against torture.

"These seven weeks before the election are critical," he said several times in his rich sonorous voice which could not belie his concern that his very own survival might be at stake. By translating a forced "confession" written by Albert Haushofer, a tenured geologist at the University of Berlin who belatedly spoke out against the monsters that came to power in Nazi Germany (after quoting it in impeccable German), Mr. McGovern gave a glimpse of what drives him to see the Bush administration fail in its remorseless quest to exalt itself at the expense of America and the world. (This is not complete.)

Here I am guilty. But it is not what you are thinking. I should have recognized my duty. I should have more sharply named evil, "Evil." ...Today I recognize what I am guilty of.
http://www.youtube.com/watch?v=v1FTmuhynaw
Add Your Comments
LATEST COMMENTS ABOUT THIS ARTICLE
Listed below are the latest comments about this post.
These comments are submitted anonymously by website visitors.