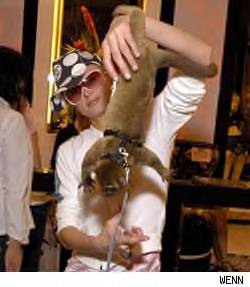 Alleged singer and celebutante Paris Hilton, desperate for attention – any attention – has recently inflicted her lifestyle on a succession of exotic pets as a publicity ploy. The latest victim of her affections is a captive “pet” kinkajou cloyingly named “Baby Luv,” which has appeared in public draped across Paris as if it were the latest fashion trend.

A kinka-what? The kinkajou (Potos flavus), also know as the “Honey Bear,” is a nocturnal tree-climbing mammal related to the raccoon that lives in the rainforests of Central and South America. Although kinkajous may appear cute and cuddly, they are wild animals that belong in the rainforest eating tropical fruit, not ducking from flashbulbs on fashion runways or sipping lattes in the cafes and trendy clubs of Los Angeles.

Innocent kinkajous such as the prisoner “Baby Luv” are often stolen from their natural habitat and sold abroad through the international wildlife trade. But hey, what does the biological diversity of the rainforest or the welfare of Baby Luv matter compared to Paris looking cool and hip?

Kinkajous are rare and threatened enough in Honduras that the country forbids exporting them without a permit, an effort to prevent the species from being needlessly exploited to satisfy the pet industry or the egos of so-called celebrities. Kinkajous in Honduras are supposed to be protected by the Convention on International Trade in Endangered Species.

The international wildlife trade is a violent and exploitive $6 billion annual industry that threatens wild animals in almost every country of the world. In 2002, more than 38,000 mammals, 365,000 birds, 2 million reptiles, 49 million amphibians and 216 million fish were imported into the United States alone. Cruel practices are often used to obtain and transport these wild animals, and many species are closer to extinction due to the high demand for their fur and body parts or use as “pets.” Since 1996, more than 2,000 species have been classified as threatened by the World Conservation Union, partly due to the negative impacts from the international wildlife trade.

Baby Luv has apparently gained favor over Paris’s pet ferret (which is also illegal to own in California). How many more biting incidents before the self-centered celebrity abandons or discards the kinkajou to keep up with the latest animal trend?

Baby Luv exacted a measure of revenge for the affront of having to put up with Paris’s antics and shrieks, biting her skinny, tormenting arm last month and sending Paris to the hospital. However, Paris’s punishment does not quite match her crime.

In California it is illegal to import or possess kinkajous, ferrets or other wild animals without a valid permit. Fortunately, the state recognizes the serious threats that the international wildlife trade poses, both to wild animals from other countries and to U.S. species when these animals are imported and then abandoned or released.

But apparently Paris does not understand or share these concerns, and she continues to flaunt her violations of several of California’s wildlife protections laws (see Fish and Game Code Sections 2118 and 2185, 2189 and 2190). In a just world, Paris Hilton would be pursued, captured, displayed and prosecuted for criminal violation of these wildlife protection laws, facing civil penalties of up to $10,000 and imprisonment in the county jail for up to six months.

Wild animals belong in their natural habitats, and species like the kinkajou should not suffer needlessly from the horrors of the international wildlife trade. Since her mom or publicist apparently won’t do it, we’re hoping you will TELL PARIS: NO ILLEGAL TRADE IN WILDLIFE.

Send a message to Paris Hilton reminding her that kinkajous belong in the rainforest, not in Los Angeles as a celebrity prop. Demand that Paris stop supporting the illegal international wildlife trade and abide by state laws that ensure protection and treatment of wildlife.

Ask Paris to do the right thing. Insist that Paris turn over “Baby Luv” and any other illegal wildlife she possesses to an appropriate wildlife rescue organization, and urge her to speak out publicly to promote the conservation of wild animals and keeping wild animals in the habitats where they belong.
http://TellParisNo.com
Add Your Comments
LATEST COMMENTS ABOUT THIS ARTICLE
Listed below are the latest comments about this post.
These comments are submitted anonymously by website visitors.