PROTEST AND SPEAKOUT in front of the FEMA Bay Area offices. Indict the Bush Regime for Criminal Negligence and Ethnic Cleansing of the Black and Poor people of New Orleans! Is the Bush Regime guilty of mass murder and ethnic cleansing in New Orleans and the Gulf Coast. We think so. Click on the link below, read about it and join us at FEMA to say BRING THIS TO A HALT! DRIVE OUT THE BUSH REGIME!

OCTOBER 5: There is a way! There is a day!
Think of all the people who are deeply distressed over the direction in which the Bush regime is dragging the country - and the world... Imagine if - out of this huge reservoir of people, a great wave were unleashed, moving together on the same occasion - in our numbers making a statement that cannot be ignored, letting it be known that we are determined to bring this whole disastrous course to a halt by driving out the Bush Regime through the mobilization of massive political opposition. Politics and protest as usual cannot meet the enormity of the challenge - but there is a way. 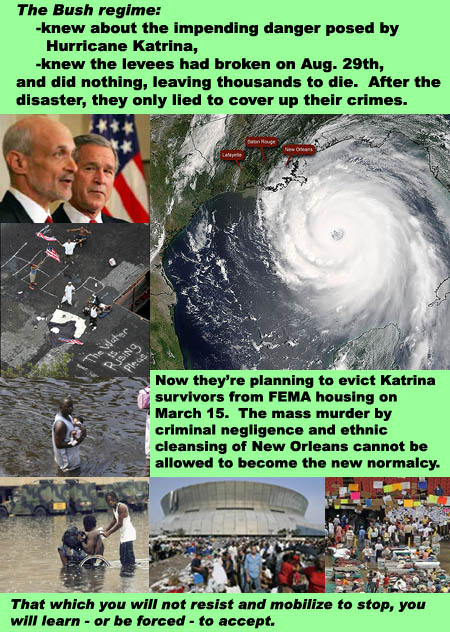 §Can you say piggyback?
by just plain rude
Tuesday Aug 29th, 2006 12:30 AM
The Katrina survivors and local folks who organize with them held a press conference at FEMA HQ on Monday. World Can't Wait's announcement pays doesn't mention the fact that other people are also doing work on this issue.

And just what does the RCP propose to do if the Bush regime is driven out (which it knows it can't do, btw)? Install Bob Avakian as president?
Add a Comment
Support Independent Media