Sgt. Clousing, AWOL for a Year to Turn Himself in Today

by DonM
Sgt. Ricky Clousing, AWOL for a year will turn himself in at Fort Lewis, WA today, Friday, August 11, 2006. 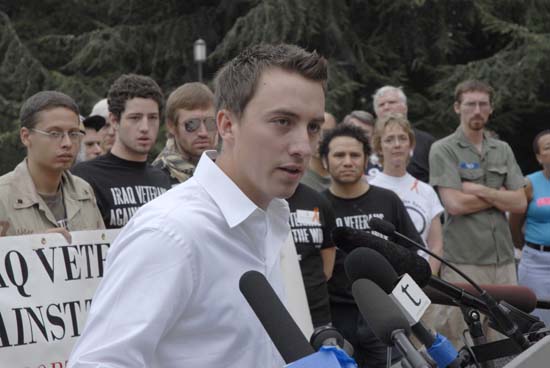 Sergeant Ricky Clousing gave a press conference at the national Veterans for Peace convention held this year in Seattle, Washington and announced he will turn himself in today at Fort Lewis, WA. He served in Iraq as a US Army Interrogator. He has been absent from his unit for over a year. Accompanied by his mother and father and with members of Iraq Veterans Against the War in the background, he spoke of the circumstances that led to his decision to leave his unit upon completion of his tour in Iraq. He talked about what he calls “the abuse of power which goes without accountability”. Sgt. Clousing, a 24 year old Washington native will join ranks with a number of veterans who have decided that they can no longer remain silent about the abuses they witnessed in Iraq. Statements of support were given by Iraq Veterans Against the War, Military Families Speak Out and Veterans for Peace. His mother read a statement in support of her son. A written statement from Sgt. Ricky Clousing follows:

“First to my Family, Friends, Brothers and Sisters of the Religious Community, Members of the Press, and fellow citizens of this nation we are grateful to call home – thank you for your support here today before I turn myself over to military custody.

My name is Ricky Clousing. I am a Sergeant in the United States Army and I have served for three years and have been absent from my unit since June 2005. Like many in uniform today, I enlisted after the events of September 11th wanting to defend the freedoms and privileges we enjoy here. After 18 months of instruction I completed my necessary training as an interrogator and was assigned to the 82nd Airborne Division.

As the invasion of Iraq unfolded I felt confused about the premise behind such an attack. But in November 2004 I deployed to Iraq in support of the first stage of elections to be held.

In Iraq I operated as an interrogator and was attached to tactical infantry units during daily patrol operations. As an interrogator I spoke to Iraqis each day. This gave me an idea of what local civilians thought of coalition forces. Throughout my training very appropriate guidelines for the treatment of prisoners were set. However, I witnessed our baseless incarceration of civilians. I saw civilians physically harassed. I saw an innocent Iraqi killed before me by US troops. I saw the abuse of power that goes without accountability.

Being attached to a tactical infantry unit and being exposed to the brutalities of war, I began to doubt and reconsider my beliefs. I thought about these experiences and what they meant each day I was deployed and until I was back in garrison at Fort Bragg in April of 2005.

Upon my return to the United States I started to ask my unit the same questions I had been asking myself. Wearing the uniform demands subordination to your superiors and the orders passed down. But what if orders given violate morality, ethics and even legality?

If those orders come unquestioned down my Chain of Command, does this exempt me from reevaluating them? My convictions, spiritually and politically, began to make me call into question my ability to perform day to day functions as a soldier. I finally concluded after much consideration that I could not train or be trained under a false pretense of fighting for freedom.

At the recommendation of my unit, I sought counsel from military chaplains and counselors, and as my feelings crystallized, I realized that I could not fulfill the duties expected of me. After months of questioning, I began considering the possibility of leaving. Each day I felt haunted by my conscience which told me that my association in uniform at this time was wrong, and my involvement directly or indirectly in this organization at this time was a contradiction to my personal, moral and spiritual beliefs.

I stand here before you today about to surrender myself, which was always my intention. I do not know what to expect, or the course of my future. We Americans have found ourselves in a pivotal era where we have traded humanity for patriotism. Where we have traded our civil liberties for a sense of security. I stand here before you sharing the same idea as Henry David Thoreau: as a Soldier, as an American, and as a Human Being, we mustn’t lend ourselves to that same evil which we condemn. Thank you.“

END_OF_DOCUMENT_TOKEN_TO_BE_REPLACED
Add Your Comments
Support Independent Media
We are 100% volunteer and depend on your participation to sustain our efforts!