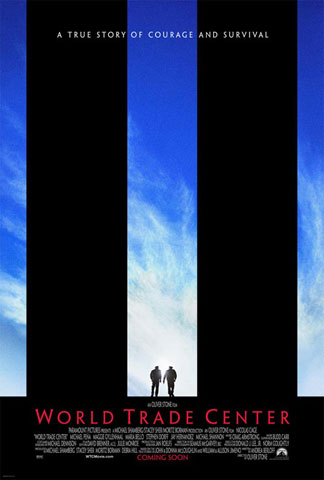 Having gotten an invitation to an advance screening of Oliver Stone’s latest film ‘World Trade Center’ in San Francisco last week, I gladly took up the offer to see this much-anticipated film.

As a 9/11 Truth activist and I was going to take a decidedly different approach in reviewing the film than other sources. Instead of analyzing the acting, the plot or by speculating on how well it would do at the box office, I instead was going to look at the film for clues that Oliver Stone was aware of problems with the official story and, hopefully, enlighten the viewing audience in his cinematic narrative. Was the Oliver Stone that politically transformed a generation by exposing us to an alternative understanding of the way the world works, like he did in ‘JFK’, still out there? Would he mention Building 7, the explosions heard by rescue personnel going off within the building and other strange anomalies? This is what I had my eyes and ears out for.

The film is based on a true story of two Port Authority policemen, Police Chief John McCloughlin (played by Nicholas Cage), and Rookie William Jimeno (played by Michael Pena) and depicts their harrowing story on 9/11. After a brief introduction to their families, we soon follows the two officers through their routine morning foot patrol, and just a short while later, into to an earth shattering chaos that happens when the planes hit the towers.

After calls for the evacuation of the towers, Port Authority Chief McCloughlin rushes to organize a team of officers to assist people who are trying to get out of the building. As the team of volunteers moves through Tower 2, one can hear the very audible sound of explosives going off all around them. The rookie Jimeno comments on these sounds only to be told by McCloughlin, “Don’t Think, Just Move.” Sound familiar?

Soon, the explosions get more powerful and with a terrible roar Tower 1 comes crashing down leaving the two men buried in the concourse elevator shaft, along with their dead, or soon to be dead, colleagues.

(I would like to stop here in the narrative and give Stone credit for emphasizing the explosions. They were very noticeable and corroborate eyewitness testimony by emergency personnel. 1 point for Stone.)

The drama continues to unfold with interspersed sounds of explosions and another harrowing escape from death as Tower 2 falls down with a crashing roar around the pinned men. After both towers fall, there is an inexplicable scene of more explosions, coupled with hissing sounds and then a scene from Dante’s Hell — flaming boulders fall and molten steel pours on the men to their astonished horror. Once again, the rookie screams in puzzlement and frustration as to what could cause such a thing to happen.

(Here I believe that Stone trying to convey a termite reaction on steel. Another point if he was. (See Stephen E. Jones paper on Thermite and the World Trade Center buildings at http://www.scholarsfor911truth.org/

Unfortunately, the officers do not get a reprieve from the horror as many hours later they are rocked once again as Building 7 comes crashing down near them. Here Stone shows a TV news clip, you know that frontal shot of the building that looks like an unmistakable demolition. The puzzled faces on the port Authority officers at headquarters as they view this scene on the television conveys just how incredulous the thought this event was.

But, having acknowledged that there were attempts of daring on Stone’s part with this film, I am also aware that some of these clues might be too subtle for those who bought hook, line and sinker the official story. The critical details of the explosions and the melting steel (something a regular carbon-based fire cannot do) and Building 7’s collapse tends to get lost by the intense human drama and dialogue unfolding on the screen.

To sum it up, Stone not only did a good job in relating the story of these men and for conveying the emotional and psychological trauma that occurred to them and their families, but for also conveying the message that there are problems with the official story. By emphasizing the explosions, showing the collapse of Building 7 and implying Thermite usage, I believe that he was trying to wake people up to these important issues.

My friend, however, felt that Stone did not go far enough in exposing the evidence and was generally disappointed with the film.

But, in all probability, Stone’s hands were tied as he is basically talking about an event were the perpetrations are still in charge and a studio (Paramount) who did not want to be too adventurous. There was probably only so far he could go.

I know I am being presumptuous by assuming Stone is a disbeliever of the official story of 9/11, but I believe he has giving us enough cinematic clues to conclude that is the case. Will the audience notice is the question.

The movie ends with Dave Karnes (Michael Shannon), a retired Marine who helped rescue the officers saying, “This must be avenged… if only we are brave enough to do so.”

That is a good question. Are we brave enough?

http://www.911truth.org
Add Your Comments
LATEST COMMENTS ABOUT THIS ARTICLE
Listed below are the latest comments about this post.
These comments are submitted anonymously by website visitors.