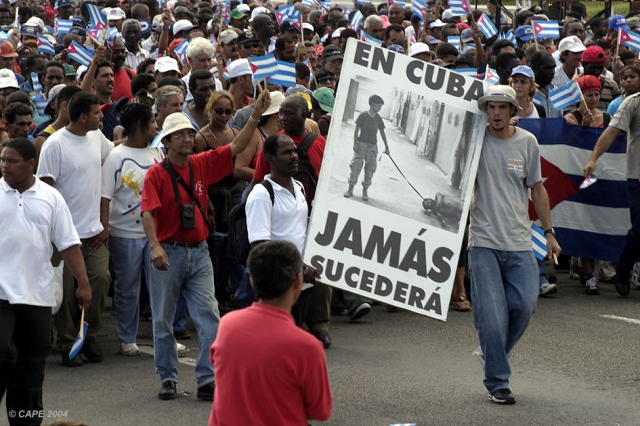 CARACAS.—Ricardo Alarcón, president of the Cuban Parliament, assured the multinational TELESUR network that the new measures announced by Washington – which he described as genocidal – seek to extend the blockade of Cuba to other countries.
"For the first time, the U.S. government is trying to extend the blockade of Cuba to other countries and… to prevent the export of medical equipment… for large-scale aid programs for foreigners or institutions," Alarcón confirmed, according to PL.
Announced by Washington on July 10, the new actions against Cuba include more funds worth $80 million in 2007 and 2008 to prepare for a supposed political "transition," and to intensify the economic and commercial blockade of the island.
In the TV channel interview, the parliamentary president affirmed that with that policy, the United States is seeking to cause suffering and harm to both Cuban and foreign human beings, who would be sanctioned for using medical equipment or for benefiting from the social programs like Operation Miracle, aimed at solving visual disorders.
"It would seem that if a blind person recovers his/her sight, or a paraplegic starts to walk, for Bush these are threats that have to be stopped," commented Alarcón, who announced an informative crusade to "reveal the truth" concerning U.S. intentions.
The threat equally extends to the program for training Latin American doctors underway on the island for a number of years.
Alarcón noted that the measures contemplate restrictions on the Cuban Council of Churches and affect the humanitarian income of the island’s religious communities.
He likewise explained that there are "very aggressive" references to Venezuela, a nation presented as a destabilizing factor and a threat to U.S. interests in the hemisphere.

The current White House tenant, George W. Bush —recurrent invoker of God in his public speeches— has once again sinned, as has his advisors who make up a special commission to strangle the Cuban people.
The rich and poor of the world have witnessed with surprise the US president’s fundamentalist “Christian” welcome for the proposals presented by the group headed by Secretary of State Condoleezza Rice.
On Wednesday morning, July 6, the devout Christian boasted of a new initiative against the Cuban people.
The new program is added to the one that has been effect since May 2004, when in a religious furry, the tenant of the Oval Office decided to replace God and redefine the concept of the family among the Cuban people.
For him, cousins, aunts, uncles and nephews are not family members of Cuban-American residents in the US. His empire prohibited Cuban-Americans from traveling to Cuba to visit such relatives and limited the remittances that could be sent to those family members on the island.
Nor can Cuban-Americans go to the island to honor their parents, sons or sisters and brothers who have passed away.
Among the new measures against Cuba now blessed by Bush, two of them stand out for their anti-Christian characters.
One of them expressively prohibits selling medical equipment to Cuba which can be used to treat foreigners or be used in humanitarian international missions.
A second measure establishes that no US church of any denomination can send any type of aid to Christians on the island.
Like a vulgar Roman emperor, guided by his religious advisors, George W. Bush turns his thumb down and tries to condemn to total darkness hundreds of thousands of Latin American people who are waiting to recover their vision through the Operation Milagro program. This is an effort promoted by Cuba and Venezuela through which tens of thousands of low-income people have received free eye treatment.
Could it be that the US President has not heard of Operation Milagro, because the mass media in his country has erected a total wall of silence around such realities?
Someone should help W. and inform him that Hondurans, Guatemalans, Bolivians, Venezuelans, Nicaraguans, Ecuadorians and many other low-income people from other parts of Latin America and the Caribbean arrive in Havana every day looking for what they consider a true miracle: free eye surgery and the recovery of their eye sight.
Maybe, the US President’s advisors have not told him that the equipment denied to Cuba has been used by the island’s Henry Reeve International Medical Brigade, made up of specialists in disaster situations who have offered vital medical assistance in Guatemala, Pakistan and Indonesia.
Sure, Christian W. Bush does not have information on this contingent which was created on September 19, 2005 with the intention of aiding the victims of Hurricane Katrina in the Gulf coast of the US – people who continue to suffer from illnesses and injustice and who are still waiting for a response from Washington on Cuba’s offer.
Bush’s advisors should not forget to tell him that Cuba has offered free medical assistance to over 150 countries despite Washington’s more than 45-year economic blockade against the island.
Armies of doctors leaving Cuba perform thousands of treatments daily on other human beings in compliance with Christian doctrine.
“Do well and don’t look at who,” and “Love others as thyself”, says the Bible.
These phrases are knows well by the US church; in the same land in which the current Republican government prohibits sending its Cuban counterparts humanitarian aid which has been offered with the purest sentiments of solidarity.
To act against one’s neighbor, to kill, assassinate, invade, deny a piece of bread to the hungry, or to prevent assistance to a handicapped person, prevent aiding the sick or giving water to the thirsty and much more are implicit in Washington’s Plan against the Cuban family, which is an antithesis of Christianity. Yes….someone should tell the White House’s tenant.

"Nothing will stop our solidarity," said Pastor's for Peace leader Lucius Walker in Pinar del Rio.

While the Bush administration continues to harden its policy towards Cuba, hoping to destroy the Revolution, the Pastors for Peace Friendshipment Caravan has once again successfully defied the nearly half-century US blockade.

Members of the latest caravan were in Pinar del Rio on Monday after having arrived in Cuba via Mexico over the weekend. On route to the island, they visited 127 U.S. and Canadian cities and communities collecting humanitarian aid for Cuba.

Referring to the latest Bush administration sanctions against Cuba, Reverend Lucius Walker, executive director of the Interreligious Foundation for Community Organization/ Pastors for Peace said, "No measure is going to stop our work."

"The Bush administration is growingly inhumane. They have run out of practical measures and the report approved by the Commission for Assistance to a Free Cuba is mainly propaganda to misinform the US people," said Walker.

"Just imagine, they talk about giving scholarships to young Cubans, something they don't even do in the United States itself. There are more afro-Americans studying medicine in Cuba than in the universities of our country," he noted.

The religious leader added, "we are going to denounce the lies in that report," and said that despite the pressure from his government, Pastors for Peace is not going to give up or stop showing its solidarity with the Cuban people.

The 17th Friendshipment Caravan arrived to Cuba on Saturday. Its 99 members, from the United States, Canada, Mexico, Denmark, Sweden, the UK and Germany, were divided into three groups to visit an equal number of Cuban provinces.

In Pinar del Rio, the program included visits to the fishing community of Puerto Esperanza and the picturesque rural community of Vinales.

Rev. Raul Suarez of the Martin Luther King Jr. Memorial Center in Havana accompanied the group, which also met with local authorities and inquired about the Cuban electoral system and the way the province copes with natural disasters. In recent years, Pinar del Rio has been hit by several powerful hurricanes.

On Wednesday, the caravan members have scheduled a visit to the Latin American School of Medical Sciences in Havana. [taken from Granma newspaper]

US anti-Cuba Report is a Pack of Lies, says US Reverend Lucius Walker

Havana, July 6 (ACN) The new report of the Bush administration's Commission for a Transition to A Free Cuba is "a pack of lies" said the Reverend Lucius Walker, executive director of the US Interreligiuos Foundation for Community Organization (IFCO) and founder of the Pastors for Peace Group.

Reverend Walker made his statements as the 17th Pastors for Peace Friendshipment Caravana to Cuba was about to attempt the crossing of the US-Mexico border earlier on Thursday in open challenge to the over-45-year US economic, financial and commercial blockade of Cuba and which caravan members consider brutal, immoral, and illegal, said a news releases by the organization http://www.pastorsforpeace.org

"The report completely misrepresents the reality of Cuba. Cuba in fact has surpassed almost every other nation in the world in the provision of health care, education, andsocial services. This has been documented by UNICEF, the World Health Organization, and countless other international organizations", said
the Reverend and added that the Bush administration twists that reality, and uses Cuba's economic hardships and shortages - which in fact are due to the US blockade - as a pretext to intervene in Cuba, set up a puppet government, and dismantle Cuba's extraordinary accomplishments. We are compelled to speak out against such an immoral intervention."

Reverend Thomas Smith, president of IFCO's board of directors said that "the restrictions on travel to Cuba exist so that the people of the US won't have a chance to find out that our government is lying to us about Cuba. As people of faith and conscience, we feel compelled to visit our neighbors and expose our government's lies."

Pastors for Peace caravanistas have been hard at work over the last few days preparing for their challenge and their journey. They have been organizing 100+ tons of aid for the Cuban people, which they collected in 127 cities around the US; taking care of vehicle maintenance on five schoolbuses, two box trucks, ambulance and vans (all of them brightly painted) which make up the caravan; and participating in
training and orientation.

Since 1992, IFCO/Pastors for Peace has delivered more than 2800 tons of humanitarian aid to Cuba - mostly medical and educational aid - without asking the US government's permission. "We don't want to be complicit in any way with a brutal policy which uses food and medicine as weapons against our neighbors. Cuba is not an enemy, and Cuba is not a threat. We won't stop protesting the blockade until it is ended, said the news release"

The anti-Cuba report, which was posted on the Webpage of the US Department of State some weeks ago and later withdrawn reaffirms the 2004 US anti-Cuba plan aiming at annexing the island, and keeps some recommendations in secret.

Some of the measures include the creation of a 80-million-dollar fund to support the so-called opposition in Cuba and to further strengthen the US economic blockade of the island. Additionally, the US House of Representatives approved a 36,100 million-dollar budget to keep financing the so-called and ineffective radio and TV Marti.

The document also recommends the "vigorous" enforcement of title 4 of the US Helms Burton Law, which allows US officials to deny entry visas to foreign entrepreneurs who have invested in Cuba.

US surveillance on companies that do business with Cuba is also reinforced, according to the latest anti-Cuba report, as well as the setting up of a special multi-agency team to reinforce the travel ban for those who want to visit Cuba, including any action to get to the island through third countries.

The anti-Cuba US commission's proposal is to be approved by the US President who, in 2004 gave the green light to a report that increased travel restrictions on Cuban Americans to visit their relatives on the island. 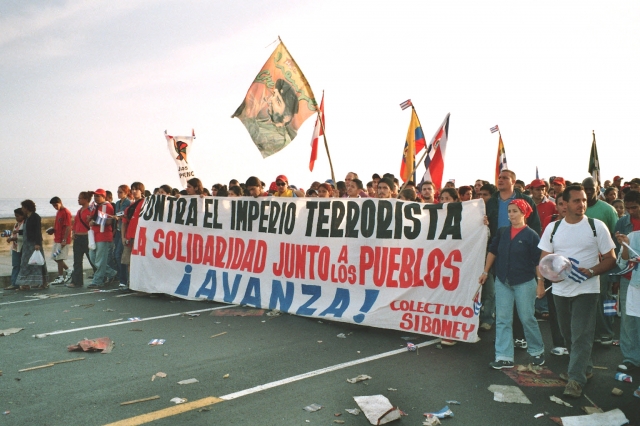