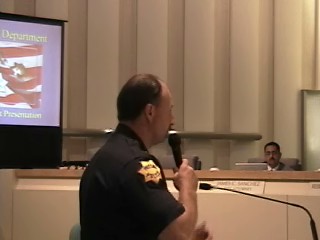 At the Fresno Police Department (FPD) budget hearings (held last week), it was reveled that they want a Department of Homeland Security (DHS) grant for $400,000. The purpose of the grant would be to set up video surveillance cameras at four (4) locations. Police chief Jerry Dyer refused to reveal the locations where those cameras would be set up. My question is: where in the heck do you think these cameras will be installed?

1. In North Fresno to watch developers as they bulldoze over agricultural land while putting in new housing developments? Maybe the cameras will be in City Hall watching the developers talking to city council members as they lobby for zoning variances so the building industry can make more money, foul our air, and exploit immigrant labor.

2. The Outdoor Drunk Tank at the Rescue Mission to make sure the American Taliban is not ranting at the prisoners?

3. Perhaps the new cameras will be located in hidden locations to capture evidence of police misconduct. Since the city council refuses to establish an Independent Police Auditor, could this be the city council’s secret project to protect citizens from police abuse?

4. What about watching those cookie eating Peace Fresno folks? The police have priors spying on them.

Let me know what you think. Where the heck in Fresno do you think the DHS and FPD want to put these cameras?

By the way, budget hearings resume on Thursday, June 22, 2006 at Fresno City Hall. For background about these hearings, see:


###
http://www.fresnoalliance.com/home
§Video of Dyer before the Fresno City Council
by Mike Rhodes Wednesday Jun 21st, 2006 9:49 AM
Copy the code below to embed this movie into a web page:
Download Video (1.6MB) | Embed Video
This clip shows Fresno Police Department chief Jerry Dyer telling the Fresno City Council that his department is seeking a grant from the Department of Homeland Security but that he will not tell them where the cameras will be installed.