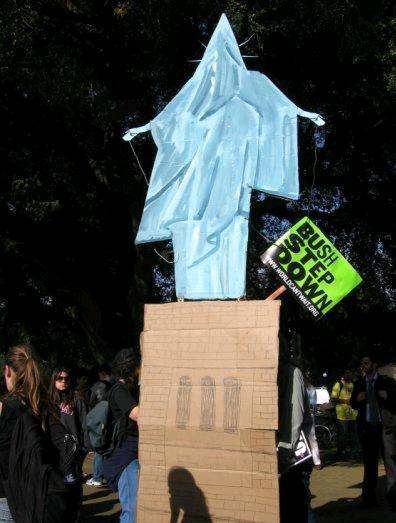 President George W. Bush was scheduled to meet with fellows at the Hoover Institution on Friday, the presence of more than 1,000 protestors forced him to change his plans and meet with advisers and faculty members at the residence of former Secretary of State and Hoover Fellow George Shultz on the outskirts of the Stanford campus.
More than 100 armed law enforcement and Secret Service officers lined the streets outside of Encina Commons, as students, parents, faculty members and local residents protested Bush’s anticipated arrival on east campus. While the protest was peaceful, three Stanford students—seniors Claire Wagenseil, Diogo Pereira and Caroline Martin— were arrested as police pushed the crowd out of Serra Street.

The protest began at approximately 2 p.m. in White Plaza, where 200 students gathered to make signs and rally against the administration. As they began marching toward Hoover Tower, others joined their ranks and began to chant slogans. By the time the rally reached the Institution at 2:30 p.m., approximately 400 protesters lined the police barriers set around the building.

People continued to join the movement, and the slogans for reform grew louder as time passed. The magnitude of the protest ultimately forced Bush to conduct the meeting at Shultz’s house located on Delores Street.

Meanwhile, outside the Hoover Institution, the crowd chanted, “Hey-Hey-Ho-Ho-Bush is here, he’s got to go.” Another popular slogan targeted the conflict in Iraq, as students yelled, “1-2-3-4-We don’t want your fuckin’ war-5-6-7-8-Stop the killing, Stop the hate.”

As the protest grew louder, the Sheriff’s Department attempted to clear the street to provide the president’s motorcade a safe entrance into the complex. When the students refused to obey these verbal commands, more than 50 police officers in full riot gear were called to the scene. Dressed in protective helmets, the officers used their batons to push individuals back from the Tower.

In response to the use of physical force, students directed their chants at the perceived infringement of their rights.

The struggle between the Sheriff’s Department and protesters reached its climax when a fire truck attempted to drive down the street and was blocked by the crowd. Security personnel were attempting to move those blocking the truck when three Stanford students sat down and refused to move.

Officers dragged them out of the road and bound their hands with plastic ties. Though others demanded that their peers be released, after 15 minutes, the three students were placed into a Sheriff’s Department vehicle and taken away. The fire truck then reversed and did not proceed down the street.

Sophomore Nicole Wires described the fire truck as a ploy used by the police.

“They brought a fire truck here because they wanted to move us out of the streets, and they knew that they could arrest us if we didn’t move,” she said. “We didn’t hear any sirens anywhere after the truck reversed. It didn’t take another route. It’s absurd.”

Mocking the administration, about an hour later, members of the San Francisco-based Global Exchange Group drove a Hummer toward the police barrier closing off Serra from Galvez. Using a speakerphone and donning masks of Bush and Secretary of State Condoleezza Rice, they parodied Bush’s foreign policy and the level of security on campus.

In its own investigation, The Daily discovered that the Hoover fellows, along with University President John Hennessy, who had planned to meet with Bush, were driven from the complex to Shultz’s private residence. At approximately 4:30 p.m., Bush arrived at the house on Delores. He departed campus at around 7:20 p.m. bound for St. Helena, north of the Bay Area.

Before the fellows and Hennessy were driven to the meeting, they gathered in front of the complex, seemingly to greet the President’s motorcade. With this delegation in plain view, several protestors began shouting obscenities at the small group and criticizing them for their support of Bush’s platform.

Based on this, it appears that even the Hoover fellows invited to the meeting were not aware that the location of the president’s visit had been changed.

A number of protesters cited specific complaints with the current administration, calling attention to these issues with colorful signs and popular slogans. Some wore stickers with the message “We all deserve the freedom to marry,” while others held signs stating “No one died when Clinton lied,” “Show me freedom! Protect my rights to my body” and “Save Darfur.”

Some students, like incoming freshman Alejandra Aponte, said they were surprised by the protest’s high turnout.

“I thought Stanford was really a bubble, but seeing all the people that are out here has shown me that people really are concerned,” she said. “I’m Latina; I’m from Guatemala. Right now President Bush is doing some very interesting things in Latin America. We have a phrase ‘For every pig, there will be a Saturday.’ Basically, his game is over.”

Though the protest was not formally organized by any one group, residents of Columbae and members of Students Taking Action Now: Darfur (STAND), the Student Labor Action Coalition (SLAC) and Amnesty International were active in the demonstration. The Stanford Marching Band also performed in front of the Hoover Institution and entertained protestors with music and antics.

“A group of us sat down together last night at Columbae and we just started dealing with the details,” he said. “We organized a time, and Columbae funds helped pay for some of our supplies. There are approximately 1,000 people around and more than half of them are protesting. This is a great success.”

In addition to students on campus, adults from Palo Alto participated in the movement outside the Hoover complex. Bernice Fischer, a member of the Raging Grannies, a group of senior citizens that regularly protest political issues in the local area, described her excitement.

“I’m glad to see all the students out here,” she said. “I’m in the Peace and Justice League and the Women’s International League for Peace and Freedom, and we haven’t had very many students work with us before. We’ve been protesting even before Bush entered Iraq.”

Carol Brouillet, a Green Party candidate for Congress, even brought a 15-foot-tall cardboard cutout of the Statue of Liberty with a sack over its head. In imitation of the famous photograph of human rights violations at the Abu Ghraib prison in Iraq, the sign symbolized the atrocities perpetrated by the United States overseas.

“Today shows there is a groundswell of opposition to Bush, the regime and its policies,” Brouillet said.

Several Stanford faculty members observed the action from afar. Director of the Institute for International Studies and Political Science Prof. Coit Blacker, who was not invited to meet with Bush, said, “I love America, and I love protests.”

The repercussions of the protest are already being felt statewide. A number of news organization were present to report on the issue, and State Controller Steve Westly, the front-running Democratic candidate in the 2006 California gubernatorial race, remarked on the controversial nature of issues involving immigration, energy and Iraq.

“I think there’s going to be a new wave of student activism around the country,” he said. “I’m glad to see some of that’s happening at Stanford. I found the protest peaceful and well-organized.”

http://daily.stanford.edu/tempo?page=conte...
Add Your Comments
§Correction
by Carol Brouillet
(cbrouillet [at] igc.org) Monday Apr 24th, 2006 12:09 AM
The reporter said I brought the statue to the protest, but actually Brian Good deserves the credit. I went to both protests, first in San Jose, then to Stanford. It was good to see such a large turnout. I passed out posters which said- Neo-Con Jobs- Iraq, 9-11 and Deception Dollars and cards to the film Loose Change, which will be at the Grand Lake Theater with the film-makers at 7 pm on May 2nd. It didn't take too long to pass out hundreds and hundreds of flyers.

The reporter neglected to say that I was there because I think the best hope for the country is for us to impeach Bush and company, to redeem ourselves in the eyes of the world. Regime change should begin at home. The failure of Congress to rein in the blatantly criminal executive branch, and to support the bogus war on terrorism, and the immoral, illegal wars on Afghanistan, Iraq qith Iran quivering before us, has prompted me to accept a suggestion from the Green Party to run against Anna Eshoo, CA 14th District. Her co-sponsorship of the Intelligence Transformation Act appalls me, as I believe the expansion of the intelligence agencies is a threat to democracy here and abroad.

The Statue of Liberty being tortured is not just a protest against what is happening in Iraq and Abu Graib and secret prisons throughout the world, but against the psychological warfare and torture being committed against Americans and innocent immigrants in this country, systemically to terrorize Americans into silence and submission.

We must not be silent. We must hold the criminals accountable and not permit them to hijack our country and the world.
http://www.communitycurrency.org
Add a Comment
Support Independent Media
We are 100% volunteer and depend on your participation to sustain our efforts!