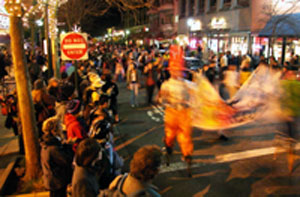 It all started because the city was too broke to continue First Night Santa Cruz, a popular alcohol-free New Year's Eve celebration that for years kept the downtown safe for children and adults.

So a small group of artists stepped up to fill the void, promising to stage a ``do it yourself'' parade -- with no organizers and no city permits. The group billed the event as a joyous ``people's parade,'' Santa Cruz-style.

But talk of a parade soon spiraled into allegations of domestic spying that resulted in a taxpayer-funded report 150 pages longer than Kenneth Starr's missive on the possible impeachable offenses of President Bill Clinton.

The controversy stems from a fateful decision in October to use undercover officers to infiltrate Santa Cruz's hidden world of zany-parade planners. Over a two-month period, two city police officers clandestinely attended organizing meetings for the parade, while others stood by as backup.

The police brass and some Santa Cruzans are calling the brouhaha a tempest in a teapot, arguing that the cops had every right to investigate Last Night DIY to ensure that its permitless parade came off peacefully.

But local anti-war and civil rights activists, buoyed by support from the American Civil Liberties Union, have accused the department of needlessly spying on a community group. They say it's all part of a chilling, post-Sept. 11 pattern.

``This is the mindset of the war on dissidents . . . a war on the Constitution itself, come home to Santa Cruz,'' said Sherry Conable, a longtime peace activist.

The controversy heated up last week when the 600-page report from the police department faced public scrutiny at a session of the city's public safety committee. The report, representing the conclusions of an internal investigation, found ``no violations of existing department policies or practices occurred.''

One reason: There is no policy outlining when it's OK to send undercover officers to a community meeting.

The internal investigation was headed by Deputy Chief Kevin Vogel, who set the undercover operation in motion to begin with.

Vogel's lengthy report on the operation quickly came under attack. Robert Aaronson of Palo Alto, the city's police auditor, called it ``incomplete and flawed, for a very predictable reason. It violates one of the most basic investigative precepts by having been compiled and written by the very individual whose decisions . . . should be under investigative scrutiny.''

When he became aware of the DIY group in late October, Vogel said in his report, he checked out its Web site, lastnightdiy.org, and perceived a ``tone of defiance'' toward the city's requirement for obtaining a special-event permit. Vogel concluded that the undercover operation was justified because the department needed to come up with a plan for policing the parade.

The deputy chief pointed to New Year's Eve in 1993, when a drunken downtown crowd broke windows and threw bottles, rocks and bricks at police officers, five of whom ended up in the hospital.

Thirteen people showed up, including the two undercover officers -- who initially generated more curiosity than suspicion.

``They pretended to be a couple of surfer dudes,'' recalled Wes Modes, a carpenter and artist who said the group wasn't planning on getting a permit because it simply couldn't afford one.

Jones and Hansen did more than observe. They suggested ways to clean up the trash and urged starting the parade early in the evening so as to attract less police attention. They also learned about a demonstration about to occur at the Capitola Mall in front of Victoria's Secret to pressure the company into using more recycled paper in its catalogs. Santa Cruz police relayed the information to Capitola police.

After the meeting, the undercover officers felt reassured that the group wanted the parade to be peaceful, according to Vogel's report.

But police brass wanted more information -- particularly, the number of people who would attend the parade.

Top officers no doubt felt they were doing the right thing when, two days later, 20,000 people showed up downtown for an informal Halloween celebration. Amid the revelry, seven people were stabbed in gang-related incidents.

The final planning meeting was held on Dec. 29 in the breezeway near Gelato Mania, a Pacific Avenue ice cream shop and oxygen bar. But by this time the group was onto the cops. Only Modes, Jones and Hansen showed up.

The next day, the planning group issued a news release saying that plainclothes officers had ``infiltrated'' their meetings.

Modes said he and others became suspicious when they tried to send e-mails to the phony addresses -- and they kicked back. He said they also unsuccessfully tried to contact the ``surfers'' at the phony phone numbers. The group then checked with a source in the police department who confirmed that undercover officers had attended the meetings.

The parade -- featuring unicyclists in costumes, Indonesian music and an ``orchestra'' beating old paint cans and trash cans -- came off without a hitch. About 500 people participated, and another 500 watched, including a dozen uniformed police officers.

Mode said the parade cost about $30 -- the tab for running off fliers advertising the event.

Last week, activists attended the city's public safety committee, which consists of three city council members, to urge it to move ahead with adopting a clear city policy on monitoring political and community groups. But the three council members said they would wait until the police auditor completes his own report next month.

City Manager Dick Wilson said he didn't have a breakdown of the costs of the undercover operation or the subsequent investigation. But he didn't believe overtime was involved.

Councilman Ryan Coonerty, who teaches a University of California-Santa Cruz course called Civil Liberties in the Age of Terrorism, said police were rightly concerned about public safety. ``But a simple phone call to the parade organizers would have addressed 95 percent of the issues,'' he said.

Modes says he would have welcomed such a phone call.

``We said at the very first meeting -- with the undercover officers in the room -- that we had nothing to hide and would be happy to talk to the police about their concerns regarding public safety,'' he said. ``It was in the report.''

Contact Ken McLaughlin at kmclaughlin [at] mercurynews.com or (831) 423-3115.
END_OF_DOCUMENT_TOKEN_TO_BE_REPLACED
Add Your Comments
Support Independent Media
We are 100% volunteer and depend on your participation to sustain our efforts!