Hong Kong, December 16- A group of Hong Kong activists declared a hunger strike that will last at least through December 18, the end date of the Sixth Ministerial World Trade Organization (WTO) conference. 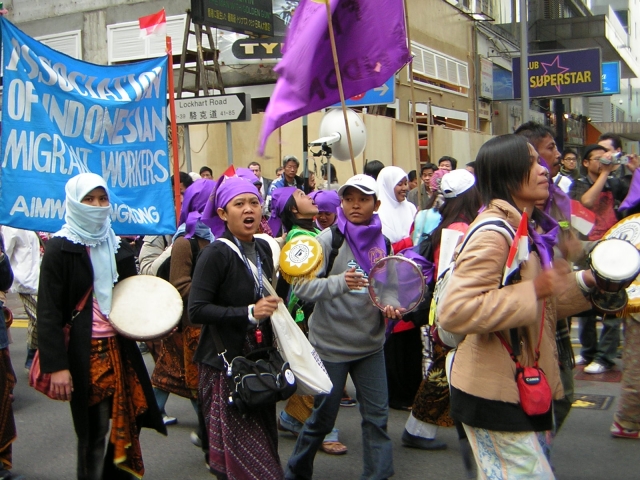 The strike was inspired by the Korean farmers’ procession on Thursday—when 1,000 Korean farmers and militant labor unionists performed a full-body bow every three steps.

In a press release the hunger strikers wrote: “In their steps and bows, we saw the strength in humility, the true power of a people. We thought of the rows upon rows of police barricades and the overwhelming power of the establishment that [the farmers] face just to get their voices heard. We sincerely hope that Hong Kong people will join us and support us. We hope that Hong Kong people will contribute to the life and dignity of our friends from overseas.”

Although the strikers note that their action is meant to be a show of solidarity with the farmers—not a platform on which to bargain with the WTO—they are nonetheless demanding that the restricted protest zone be opened and the police barricades removed; that the WTO opens its doors to the people outside the Convention Center and acts on their concerns; and that the WTO delegates remove the items of agriculture and fishery off the agenda.

Asian Women March Against the WTO

In the afternoon more than 250 people gathered for a Women’s March Against the World Trade Organization (WTO). The event was sponsored by several Asian women’s organizations with the intent of demonstrating that worldwide—and certainly in Asia—peasant and low-income women suffer the worst effects of poverty, insecurity and displacement caused by WTO policies that benefit multinational corporations and rich countries at the expense of the majority of the world.

At a small park from where the march began, women unfolded an enormous patchwork quilt. The quilt was a compilation of many smaller quilts that had been brought to Hong Kong by anti-WTO women’s delegations from all over Asia. Many of the quilts had been signed or drawn on by women who could not come to Hong Kong but who wished to express their solidarity to protesters. The women’s delegations had met each other at Victoria Park on Wednesday, at which time they had taught each other anti-globalizations chants in various languages, then sewed their smaller quilts together into one massive quilt. In an article on their website, the Thailand-based organization Asia Pacific Forum on Women, Law and Development (APWLD) described the quilt as being symbolic of the “weaving together of all our patches of resistance towards a global resistance against corporate globalization and the landlessness and poverty it has brought to women in the Asia Pacific region and around the world. “

Other organizers of the march include Filipino groups Gabriela—a national liberation movement “working to free women from all forms of economic and political oppression and discrimination” around issues of sexual violence and abuse, health and reproductive rights;” also the Asian Peasant Women's Network (APWN) and the National Federation of Peasant Women in the Philippines (AMIHAN).

Women from Mongolia, Indonesia, Cambodia—working in the sex industry, as farmers, or as college professors—held colorful, multi-lingual banners and signs. Bedecked in purple scarves bearing the words “No to WTO/ Kong Yee Sai Mau” women and other allies of women’s struggles made their way steadily past an endless onslaught of bustling traffic. The atmosphere was convivial as demonstrators sand, cheered, waved and engaged with a reserved but seemingly receptive public.

However, when a group of Hong Kong activists showed up with a sign reading “Hong Kong People Support International Demonstrators Against Unfair Trade” their enthusiasm was contagious. Locals—including an entire contingent of a dozen schoolgirls in uniform—climbed over the low barricades and joined the procession, welcomed by a roar of approval from the marchers. The women’s march concluded at the designated protest zone by early evening.

Meanwhile, fifty Korean trade unionists and farmers had spent the afternoon storming the US and Korean consulates in the business district this afternoon. They spraypainted “Down down WTO” and “No Bush” in red and black on the US Consulate while tearing the letters of the sign and throwing eggs at the building. In addition, several demonstrators shaved their heads as a form of protest.

The activists explained that the US-machinated WTO free trade polices force South Korea to buy rice and other agricultural products from the US, destroying the livelihoods of Korean farmers. After a scuffle with the police, the protesters marched to a park and dispersed.

Meanwhile, 100 others from the Korean anti-WTO delegation demanded entry into the South Korean consulate, brushing past security guards who would not let them through. A dozen of them sprinted through the lobby to the elevators and managed to reach the fifth floor—where the consulate office is—before security disabled the elevator. It is unclear if any of the protesters got inside the consular office.

Police arrived at 5pm to negotiate with the Korean activists in the building. They were greeted by 25 other protesters who held an impromptu sit-in in support of the Korean farmers and unionists.

“We’re South Korean citizens. We have a right to talk to our consulate,” one activist explained, demanding an apology from the Hong Kong police.

Inside the convention center, on the fourth day of the WTO ministerial conference the talks are “going backwards” according to the EU Trade Commisioner Peter Mandelson. The US and the EU blame each other for the stalled negotiations. Tension is increasing because the talks might fail. The US rebukes the EU for its refusal to cut farm tariffs, yet the US government’s huge domestic subsidies of agribusiness remain untouched. It is these subsidies that enable the US to flood the markets of smaller countries, driving down prices and making it impossible for local farmers to earn a living. Since the WTO operates by consensus, the bold announcement made today by the African, Caribbean and Pacific countries (ACP) threatens to derail talks altogether. Mauritian Minister of Agriculture Arvin Boolell, a spokesperson for the ACP, announced that the group “will not accept any agreement in Hong Kong that is made at our expense.” The ACP is made up of former European colonies that rely significantly on agricultural exports. Therefore they seek protection for local sugar, cotton and banana farmers and demand continued preferential access to the EU market.

Disagreements about agricultural policies are also retarding the discussions in other areas, such as manufactured goods and services. Non-Agricultural Market Access (NAMA) is a major source of contention. Likewise Annex C and the draft texts of GATS are highly controversial. Government officials and activists alike are concerned that the privatization of services will threaten poor people’s access to vital services such as water or healthcare. According to the South China Morning Post, the ACP drafted an alternative to Annex C but has tabled their proposal. By withdrawing their proposal from discussion, they eliminate—at least in this conference—the possibility of an agreement on services.

Pascal Lamy, the Secretary-General of the WTO has scheduled a meeting late tonight. A major goal is to have a new proposal on agriculture ready by midday tomorrow.

Trucks loaded with cinderblocks and other construction materials are now driving into the protest zone outside the Convention Center. Overnight, more barricades and fences will be going up.

http://www.targetwto.revolt.org
Add Your Comments
Support Independent Media
We are 100% volunteer and depend on your participation to sustain our efforts!